What's New
A FOCUS on Mission
Must Patience Be So Slow?
Harold Jantz: A Heart for the Mennonite Story
Lorlie Barkman: A Life of Creative Engagement
Last Days, First Days
Women in Ministry: Bertha Dyck
January Moment in Prayer “Holy Spirit—Fill Us!”
The Church as the Patient Body of Christ
Advent: Making Much of Jesus: Christmas Day
Advent: Making Much of Jesus: Fourth Advent
Home News What is the secret to living to 100? 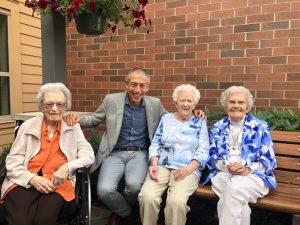 According to Velma Uren: “Fresh air, good food, hard work, and appreciating what you have.”

Uren is one of three centenarians who came together July 20, 2019, to celebrate their milestone birthdays at Tabor Village, Abbotsford, B.C.

Family and friends, along with all of the residents of the assisted living building where they live, gathered for cake and games to honour Uren, Gwen Gregorig, and Helene Franz.

“The one lesson I would like to pass on is to love one another.”—Gwen Gregorig

Each birthday lady was presented with certificates on behalf of Mayor Henry Braun and Abbotsford City Council. These three women are still as full of life as ever.

When asked what it’s like to be 100 years old, Franz says, “It doesn’t feel any different. I still feel like a spring chicken.”

She recites the Scripture verse that has guided her life: “Thou wilt keep him in perfect peace, whose mind is stayed on thee: because he trusteth in thee” (Isaiah 26:3).

Beginning in Ukraine, Aug. 13, 1919, during the Russian Civil War, Franz’s story is evidence of God’s faithfulness. When she was seven, her family sought refuge in Canada, settling in La Glace, Alta. At a New Year’s Eve service, as a young girl, Franz accepted Christ as Saviour, and later attended La Glace Bible School and Prairie Bible Institute. 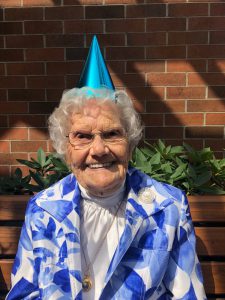 She felt the call to be a missionary and was prepared to go – even if that meant going alone. However, before she left, she met and married Jacob Franz, who also wanted to do cross-cultural mission work.

The two spent more than 20 years serving an unreached people group in Paraguay with their six children. Helene taught women to sew and cook, and “killed snakes so they wouldn’t hurt my children” – despite her fear of snakes. She recalls with a smile that it took three months to get to Paraguay on an Argentine freighter, but only three days to fly back to Canada.

Upon their return, they pastored King Road MB Church, Abbotsford, B.C., where Franz is still a member.

Her family is gathering from far and near this weekend to celebrate her milestone birthday. “I am thankful for a very nice family,” she says.

Franz’s prayer for the MB church: “That we will keep spreading the gospel to those around us and giving the young people places to serve.”