What's New
A FOCUS on Mission
Must Patience Be So Slow?
Harold Jantz: A Heart for the Mennonite Story
Lorlie Barkman: A Life of Creative Engagement
Last Days, First Days
Women in Ministry: Bertha Dyck
January Moment in Prayer “Holy Spirit—Fill Us!”
The Church as the Patient Body of Christ
Advent: Making Much of Jesus: Christmas Day
Advent: Making Much of Jesus: Fourth Advent
Home News Dressed up to stop trafficking 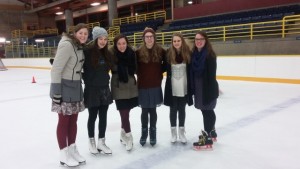 Dress in the wardrobe God picked out for you: compassion, kindness, humility, quiet strength, discipline. And regardless of what else you put on, wear love. It’s your basic, all-purpose garment. Never be without it (Colossians 3:12b, 14 The Message).

“I have to do that [Dressember] next year!” Brianna Janz thought when she saw a Facebook friend wearing a dress every day in December to raise awareness and funds for International Justice Mission’s (IJM) work on behalf of human trafficking victims.

So in December 2014 and 2015, Brianna and her sister Julie Janz, together with friends from inside and outside King Road MB Church, Abbotsford, B.C., donned a daily dress in support of IJM.

“Dressember is attractive because it’s something tangible we could do,” says Julie. “Human trafficking is a huge problem, and it’s easy to get overwhelmed. At the heart of Dressember is the fight for dignity for women exploited for their femininity – that’s something I get excited about.”

“We definitely feel the church behind us.” The wife of the German congregation’s pastor joined them this past year. “It’s cool to engage not just our generation but a variety of people,” says Julie.

“Every day you put on dress,” says Brianna, “you think of people who don’t have a choice of what they wear and what they do.”

Dressember is the brainchild of then-college student Blythe Hill from Los Angeles. In her TEDx talk, Hill explains how, after she began wearing dresses every December out of boredom, she decided to use this challenge to raise money for human trafficking victims.

What does the Lord require?

As Mennonite Brethren, “I feel our desire for peace has a big influence on making sure people are safe,” says Brianna. Referencing Luke 12:48, she says, “When you’re given much, much is required; I’ve been given a great family and safety and education, so what does God require me to do with what I’ve been given?”

In Julie’s university classes, answering “Why are you wearing a dress?” gives her plenty of opportunities to share her values regarding justice.

“When people ask, the verse that pops up for me is Micah 6:8: ‘He has shown you, O mortal, what is good. And what does the LORD require of you? To act justly and to love mercy and to walk humbly with your God.’ I tell them, ‘This is one of the reasons.’”

The verse also appears in King Road’s social media posts – viewed by many outside the church.

From knowing to doing

History major Brianna says, “In every course I take – whether on the Holocaust or the American civil rights movement – we look at what the church did in those situations. It pushes me to ask, ‘What are the keystone moments in our world today that people will look back on and say, ‘What were [Christian] people doing?’”

For Julie, a social work student, “Dressember awakened a desire in me to pray about how God wants to use me in the field of helping victims.”

The issue of modern slavery “forces me to take my faith to a level of action,” says Julie. “James talks about not just knowing the Word, but doing it (James 1:22). When I know about trafficking, I can’t profess to be a Christian unless I do something about it.”