What's New
Through the conflict, life carries on in Ukraine
A FOCUS on Mission
Must Patience Be So Slow?
Harold Jantz: A Heart for the Mennonite Story
Lorlie Barkman: A Life of Creative Engagement
Last Days, First Days
Women in Ministry: Bertha Dyck
January Moment in Prayer “Holy Spirit—Fill Us!”
The Church as the Patient Body of Christ
Advent: Making Much of Jesus: Christmas Day
Home Life & Faithinspirational And…action!

As caretaker of a large rural estate near Vancouver, I have a variety of ordinary tasks, but several times a year, I become liaison person to Hollywood when movie producers come calling. They love to film around and inside the mansion with its opulent decor. 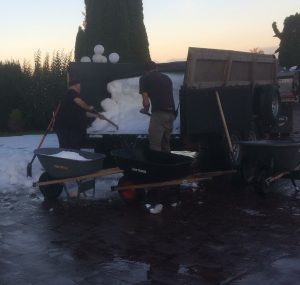 For a recent Hallmark Christmas movie, loads of ice from a fish packing plant were hauled in and strategically spread outside the mansion to simulate winter. PHOTO: courtesy Albert Janzen

At first, it was amazing to observe the backside of Hollywood close-up, but now I know move-making is just another job. Hollywood is the master of deception and what you see in a movie is only part of a wider context, fully orchestrated all the way.

All that matters is what the camera sees.

In addition to the main actors, there are background actors: people with non-speaking roles from all cultures and walks of life. They are well-dressed and look like main actors, but they’re not. They are selected to fill in the scene, not so much for who they are or what they can do. 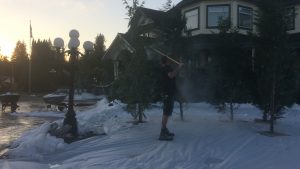 In Alberta, you might not have to go to such extremes in September! PHOTO: courtesy Albert Janzen

No extras in the church

I started thinking of the parallel between filmmaking and church.

Often, our services are carefully choreographed with little spontaneity. The lead roles are for those on the stage and the congregation meekly plays the role of the background performers.

In the past, MB churches made most of our decisions by consensus. With the move away from the congregational model, we must be more proactive and creative in encouraging every member to be involved.

We need to be willing to take risks: to call young people, new believers, and people on the fringes (Matthew 25:40) to use their gifts in the church – even if the way they do things might not be as professional as what we are used to. Let’s give them the chance to try their wings.

Some attenders aren’t yet comfortable doing more than worshipping from their pew and putting their offering in the basket. How can we foster their sense of worth and confidence? Everyone matters.

To what extent do you and I allow the Lord to write the script for our lives at the beginning of each day?

Will we accept the active, speaking role God wants us to play – not just on Sundays, but all week long?