What's New
Through the conflict, life carries on in Ukraine
A FOCUS on Mission
Must Patience Be So Slow?
Harold Jantz: A Heart for the Mennonite Story
Lorlie Barkman: A Life of Creative Engagement
Last Days, First Days
Women in Ministry: Bertha Dyck
January Moment in Prayer “Holy Spirit—Fill Us!”
The Church as the Patient Body of Christ
Advent: Making Much of Jesus: Christmas Day
Home News Alberta increases collaboration with national conference

Praise the Lord with the harp and lyre… and banjo! Tom Mulhern of Dalhousie Community Church, Calgary, leads worship.

Hoping to rediscover the call of God’s kingdom on their lives, some 100 people gathered at Dalhousie MB Church, Calgary, Mar. 15–16, for the annual convention of the Alberta conference (ABMB). By the end of the weekend, the province had agreed to collaborate more intentionally with the national conference, and to outsource most of its services, resourcing, and even budget to the Canadian conference, in order to see God’s kingdom come in Alberta.

Over the past number of years, ABMB’s budget and church donations have shrunk significantly, putting the province’s long-term viability at risk. As one delegate said, “our ability to offer resources to our churches is dissolving before our eyes.” The ABMB executive board agreed that increased collaboration with the national conference would provide the best solution to meet the needs of the province’s 22 congregations.

Although the provincial conference wasn’t completely dissolved, delegates agreed to implement nationally deployed resources in the areas of leadership development, caring for leaders, and administration – in addition to pre-existing partnerships in church planting, stewardship ministries, and events.

Delegates also passed a motion to allow the executive board to develop a plan for a unified national-provincial financial stream. The board will present the plan at ABMB’s 2014 convention, where delegates will be asked to vote on the recommendation. 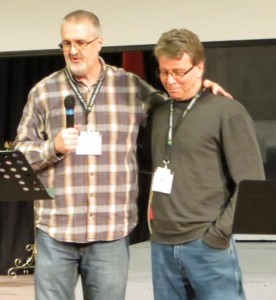 ABMB executive director Daniel Beutler prays for Terry Lamb, who will serve the province in the areas of pastoral care and prayer.

More intentional national-provincial collaboration will likely mean greater responsibility for Canadian conference staff within Alberta. But beyond that, details are still unclear. “It’s like changing a tire while driving,” explained ABMB executive director Daniel Beutler. “It’s not clear what the nuts and bolts are going to be.”

Delegates expressed some concern over the idea of a unified financial stream, wondering whether the province would see its “fair share” of funds. Assistant moderator Kerry Dyck assured delegates that it wasn’t a matter of competition between the provincial and national conferences. “It’s not about us and them,” said Dyck. “It really is just us.”

Other delegates asked how the Alberta conference would retain its charitable organization status if all funds were directly transferred to the Canadian conference. The board said it would address this and other legal questions as it develops the proposal, but ultimately wants to simplify financial giving for its churches. 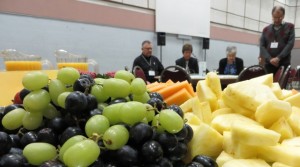 Delegates at the ABMB convention gathered for a prayer breakfast on Saturday morning to pray for the province and country.

“The future is full of possibility and promise,” concluded moderator Val Martens. “We will continue to take steps to maintain unity and connection here in Alberta. Our pastor clusters will remain strong, and communication will still come from Alberta. And our provincial board of faith and life will stay the same.

“As we move toward more intentional collaboration with the Canadian conference, we’ve found them to be welcoming and encouraging,” said Martens.

Canadian conference executive director Willy Reimer responded, saying, “We’re asking how we can do this more effectively. We want to work together. We want to see people who are far from God walk with God. That’s our heartbeat.” 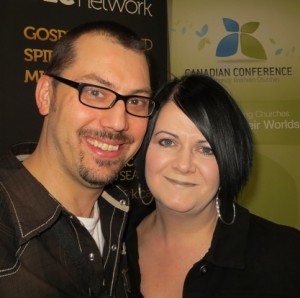 Trevor and Lesley Rysavy were welcomed by the Alberta conference after their church, Urban Grace, officially joined ABMB.

“Not too long ago in our province, we were shutting down churches,” said board member Elroy Senneker. However, Alberta is now seeing new life through church planting. “God is using us as Mennonite Brethren, drawing people to himself,” he said. Senneker then officially commissioned Johnny Thiessen – who was introduced at last year’s convention – as C2C regional director for Alberta.

As a tangible sign of hope, the conference welcomed Urban Grace as its newest church. Planted by Trevor Rysavy in 2010, the congregation meets in the Kensington area of Calgary.

“Three years ago, my heart was broken for the city,” said Rysavy, “so my wife Lesley and I moved to the urban core with our family. That’s what church planting is all about: you get your heart broken for a city and then you just don’t quit!” Urban Grace has grown from 22 people to some 100, operating in four different missional communities. 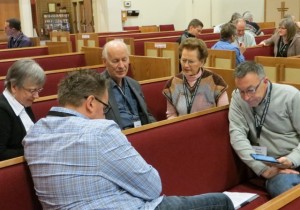