What's New
Abortion, the image of God, and faithful witness...
Choosing motherhood: The sacrifice of honouring life
MWC Assembly small but full of joy
Bad back doesn’t hold back MDS volunteer
Transition in CCMBC National Faith and Life Leadership
Leading through the trauma of covid: Part three...
The church distracted: When the main thing is...
Remote wilderness rescue turns into service with MDS...
How open is your mind?
Following Jesus together across barriers
Home News ACTION France

Le Lien, the French publication of MB churches in Quebec, interviewed Aurore Rediger, youth pastor of two Mennonite churches in eastern France and program director of MB Mission’s ACTION France for the past four years. This article first appeared in the summer 2015 issue of Le Lien.

How did you hear about MB Mission’s ACTION program? 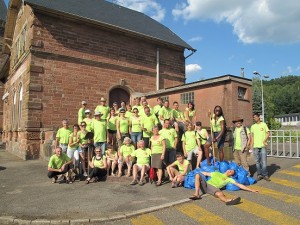 AF 2014 participants joined with France Pour Christ’s evangelism camp and did a town clean up afternoon in Biche.

ACTION France (AF) was born in the Democratic Republic of Congo in June 2010. I was a participant with ACTION Ontario, leading a team of six Anglophones. While the opportunities were not wanting for short-term mission in this French-speaking country, my Anglophone friends faced enormous barriers – that of language plus cultural obstacles…. Jean-Baptiste, the missionary pastor who accompanied us during the mission, asked me one day, “Aurore, where are the francophone workers for the harvest in French-speaking countries?”

This question was like a call from God to mobilize young francophones and to make disciples who will serve in French-speaking countries. On my return to Canada where I directed SOAR Montreal 2010, the vision of ACTION France was born with the desire to join Quebecois and French people for five weeks in the summer to prepare them (with one week of orientation in France), send them out in teams to serve for three weeks in France, Quebec or French-speaking Africa, and to help them during a week of debrief (in France) to assess what they experienced and learned to prepare them to live on mission when they return home.

Who is the program for?

This program is for young francophones age 17 and older who want to take another step in their faith, and who are ready to serve Christ for five weeks during their summer. These young people are sent by their local churches. A mentor supports them before, during and after this short-term mission.

What are the principal objectives?

AF 2014 participants share about their experience in Burkina Faso.

For the three weeks of service in France, Africa or Canada, we prioritize work in partnership with local churches. This also allows the short-term workers to more quickly integrate into the local culture, to work with local people and to participate in work that will continue after the departure of the ACTION France team.

We offer different experiences: compassion and relational ministries, service projects, evangelism and interaction with nonbelievers, prayer and intercession. The goal remains to share the love of God, the only hope of the world, to live out compassion in the footsteps of Jesus, to learn to submit to the guidance and transformative power of the Holy Spirit, and also to aid participants in discovering their gifts.

We want to develop more workers for the harvest in French-speaking countries.

Over these four years, we have had the privilege of walking with 55 youth. By faith, I want to believe these disciples of Christ make a difference in this generation and in those to follow. I dream of seeing these youth become leaders who plant churches in la Francophonie and the world. I want to awaken in these youth a heart for the church and the world.

I am encouraged to see the youth who have passed through ACTION France develop a deeper love of God, his Word, their church and others, and invest themselves in their communities, taking responsibilities in their local churches. And some of the engage in longer-term mission.

How can we pray for you?

The challenges and the requests are the same as in the time of Jesus: “When he saw the crowds, he had compassion on them, because they were harassed and helpless, like sheep without a shepherd. Then he said to his disciples, ‘The harvest is plentiful but the workers are few. Ask the Lord of the harvest, therefore, to send out workers into his harvest field’” (Matthew 9:36–38).

—from Le Lien, translated into English by Karla Braun