What's New
Through the conflict, life carries on in Ukraine
A FOCUS on Mission
Must Patience Be So Slow?
Harold Jantz: A Heart for the Mennonite Story
Lorlie Barkman: A Life of Creative Engagement
Last Days, First Days
Women in Ministry: Bertha Dyck
January Moment in Prayer “Holy Spirit—Fill Us!”
The Church as the Patient Body of Christ
Advent: Making Much of Jesus: Christmas Day
Home News A Bible for every home

A Bible for every home 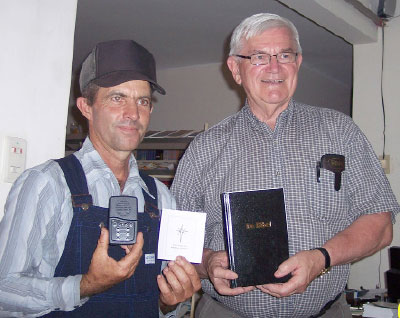 Norman Brown’s goal: to distribute the Plautdietsch (Low German) Bible free of charge to every home in Bolivia. Since Kindred Productions released De Bibel in 2003, the Winnipegger has handed out more than 8,000 copies.

One of the first Bolivian Mennonites to whom Brown gave a Plautdietsch Bible was a man who spent most of his time in bars while his wife struggled to provide for their family. When he accepted Jesus, “his thirst switched to the Word of God, and he began to treat his family with love and respect,” says Brown.

Brown began ministering to Plautdietsch-speakers in 1994 when Power to Change (formerly Campus Crusade for Christ) placed him in charge of the newly translated Plautdietsch JESUS film. Brown and his wife Dorothy – who’d both grown up with the language but hadn’t spoken it for years – sensed God’s call and began re-immersion by doing nightly devotions together in Plautdietsch.

The 75,000 Plautdietsch-speaking Mennonites living in 75 colonies in Bolivia are among the most traditional, travelling with horse and buggy and wearing straw hats and bib overalls. Their ancestors left Canada for Mexico in the 1920s. Lacking biblical training and fearing corruption from the world, when evangelical teaching came to Mexico, the most conservative Mennonites moved to the Chaco and East Paraguay and from there to Bolivia in 1953. While owning a Bible isn’t prohibited, the colony leaders fear “too much learning just confuses people,” says Brown.

Peter Friesen, Power to Change’s ministry director in Bolivia, says the only way to get the gospel to the people is through Plautdietsch. Brown explains, “Most of the Plautdietsch people only comprehend approximately 20 percent of what they read in German.” Their children attend six years of school in German; then they are qualified to teach others. Brown compares their proficiency in German to the level of French in most Canadian children.

“The need for Plautdietsch material cannot be overstated,” says Brown.

In Bolivia, a man who’d received a Bible six years earlier asked Brown to meet him. “Since then, he’d read it carefully every day, and just recently, he had understood that he needed to invite Jesus to be his Saviour.” The man brought his questions (for which church leaders had excommunicated him), and the two searched Scripture together.

“Now, he prays daily for the leaders of the colony,” says Brown, “and he takes every opportunity to share the gospel with friends and neighbours.” 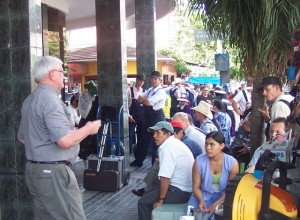 Norman Brown preaching in a market.

Because about 30 percent of Plautdietsch people in South America are functionally illiterate, Power to Change collaborates with Family Life Network to provide the New Testament on MP3 players. “We cannot meet the demand because the cost of producing it is still quite high,” says Brown.

Brown has made 20 trips to South America to show the JESUS film and distribute the Bibles, with Bolivia as his focus. He works through the local churches and missions, particularly Evangelical Free Church, the Evangelical Mennonite Mission Church and Trans World Radio.

When someone accepts a Bible, Brown asks if they know whether they’ll spend eternity with God, and if they could be sure, would they want to be. The answer to the latter is almost always “yes.” That opens the door to share Scriptures of assurance: “Whoever has the Son has life; whoever does not have the Son of God does not have life. I write these things to you who believe in the name of the Son of God so that you may know that you have eternal life” (1 John 5:12–13).

Some say, “That is not the way we have it over here. We all hope to be saved one day,” but the most common responses are “Where does it say that?” and “That is very clear!”