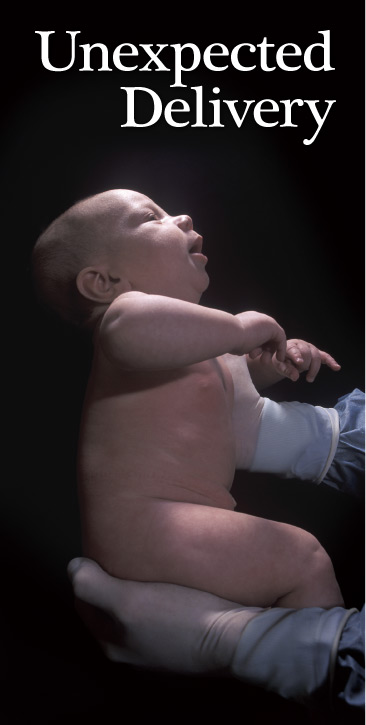 Our two children were in bed, and I was waiting for my wife Felicia to come downstairs, so we could watch the movie I had rented. After waiting a few minutes, I ambled up to our bedroom.
I found Felicia by the bed, doubled over in pain.
Felicia had complained of some contractions the day before, but they had apparently passed. (I never knew they could just…leave.)
“We have to go to the hospital,” Felicia groaned.
As I ran around in a packing frenzy, I called a friend to look after our kids. I had just helped Felicia to the door of our house when I heard two noises at the same time: a splash and a loud gasp from Felicia. I looked at her, and then looked down to what it looks like when a woman’s water breaks.
“Call 9-1-1,” Felicia said. She was calm. I was not. I fumbled with the phone. Why couldn’t I dial those precious three numbers?
Chris, the 911 operator, told me that help was on the way and instructed me to have Felicia lie down somewhere comfortable. I found a nice piece of hardwood floor by the entranceway and eased Felicia down onto it.
“Now go get two shoelaces and a safety pin,” Operator Chris directed.
As I obeyed, I started to wonder if I had some sort of MacGyver wannabe on the line, about to try some experimental childbirth method he had been concocting during the slow times of his job.
By now, I could hear the fire truck sirens approaching. I ran to the entrance of our townhouse complex to ensure the gates were open (They were kind of temperamental at the time.) As I ran in the rain toward the sound of the sirens, I felt for a split second like I was in a movie.
Having guided the fire truck to our place, I asked the five hulking firefighters who stepped onto the wet pavement, “Have any of you delivered a baby before?”
They all looked at each other. Nope.
If one were to have photographed the scene that followed, the picture would have included:

Suddenly, a head pops out. “He’s not crying!” Felicia moans.
Seconds stretch into an eternity.
And then the entire child slides out into the hands of Firefighter Steve. He and another firefighter juggle baby and towels as they attempt to wrap him up.
“He’s slippery!” someone quips.
Baby is placed in Felicia’s anxious and impatient arms. He is wrapped in one of our hand towels. He is crying and screaming – making up for his reserved entry.
And we all just sort of stare at each other, unable to process what has just happened. A baby! Born not in the comfort and germ-free safety of a hospital birthing room, but in the cramped and untidy confines of the entrance to our house.
As the paramedics loaded Felicia and baby James into an ambulance, our neighbours peered over their balconies. I announced the good news: “My son was just born!”
The emergency room nurses came running to see Felicia and “the firefighter baby.” Their excitement was contagious – even the sick people looked up and nodded at our good fortune.
We live in a world of wonders. Many of us live lives of frantic activity, and the wonder and mystery of life often gets lost in the rush. Others experience profound pain and darkness, which can blot out the beauty and sheer goodness of being alive. But every once in a while, we have a moment where the miracle of life creeps up and bursts in on us. It could be a sunset or an unexpected kindness from someone. The birth of James was one of those revelatory moments for me and Felicia.
James was born unexpectedly in our home, delivered by firefighters.
Jesus was born “in the fullness of time,” delivered in the presence of both divine and human onlookers.
The birth of James created a sense of connection with five men who were strangers when they entered our home. His birth transformed strangers into men with whom our family will share a lifelong bond.
The birth of Jesus (as well as his sinless life, death, and resurrection) creates lifelong bonds between people who were formerly strangers.
The story of James’ birth has reverberated globally through excited family members in Oxford, England; Hyderabad, India; Saskatoon, Sask.; San Diego, Cal.; and Singapore (and through many excited friends as well).
The story of Jesus’ birth resounds far and wide with our “family” members who gather to worship as part of the global church.
Jesus’ birth transforms alienated humans and causes us all to resound with excitement at his miraculous birth. May both these miracles of fellowship with others and excitement about our Saviour be birthed in you this Christmas season.
Moments of wonder and grace do happen. I know. It happened to me.