What's New
Through the conflict, life carries on in Ukraine
A FOCUS on Mission
Must Patience Be So Slow?
Harold Jantz: A Heart for the Mennonite Story
Lorlie Barkman: A Life of Creative Engagement
Last Days, First Days
Women in Ministry: Bertha Dyck
January Moment in Prayer “Holy Spirit—Fill Us!”
The Church as the Patient Body of Christ
Advent: Making Much of Jesus: Christmas Day
Home MB HeraldFeatures The pie auction 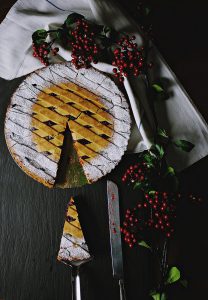 Photo by Toa Heftiba on Unsplash

The intention was noble enough – to raise money for the young people to attend a youth convention. People were asked to bake pies that would be auctioned at outrageous prices.

Since our kids are grown I contended that we had paid our dues in the youth department and could sit and watch. My dear wife, she of more expansive spirit, proceeded to create not one but two pies for the auction.

The first would be a plain cherry, and for that I was willing to abide her do-gooder inclinations.

But then, doubtless as a rebuke for my curmudgeonly thoughts, she would make the second one of saskatoons.

Now, to non-prairie folk the word saskatoon may simply denote a pleasant city on the banks of the Saskatchewan River. But to us it means a luscious purple berry, packed with flavour and wild intrigue. I’ve always thought the Creator was showing off when he made them.

Saskatoons are persnickety. They grow when they feel like it, and some years, don’t show up at all. They’re a precious fruit, not given to the wanton commercialism of an auction.

So I was chagrined that my wife would dig into our precious freezer stash so young people could go to a convention and pay for hotel rooms they probably wouldn’t use anyway. At least not to sleep in.

My protests were ignored.

We brought the pies to church, me scowling and my wife glistening with selfless virtue.

She had to leave early for another errand of mercy, and I was left to preside alone. At previous auctions I often felt sorry for bakers whose offerings fetched a low price. I’ve been known to bid up a lonely pie, then bail out before the gavel comes down.

I resolved not to let the saskatoon pie go cheap.

No fear of that, it turned out. The auctioneer made quite a fuss that this was a saskatoon pie, and that the berry season was long past and wouldn’t be back for months. In no time my wife’s pie soared to $110, somewhat ameliorating my sense of loss.

Her cherry pie, however, was among the last to go on the block, long after those with criss-cross crusts and curls of dark chocolate had vanished. I made it my cause to go after it, and got it for $60.

At home I wasted no time. Lunch had been light, and even cherry pie was better than no pie. I peeled  back the plastic wrap and excavated a wedge. For mere cherry it looked pretty fine.

The first forkful gave me pause. This was the best cherry pie I’d ever had.

Not really. Clearly, someone had switched the labels, either by mistake or by mischief. What I had before me was saskatoon pie.

I don’t usually say grace for dessert, but I was tempted to in this case as there seemed no explanation for the switch other than divine favour. I was ecstatic.

For me that would have been the end of it, but not for my wife, for whom this transaction did not compute. The Peters family had paid $110 for a premium pie and received mere cherry instead.

“It’s for a good cause,” I said, wiping scarlet juice from my lips.

In minutes she was on the phone explaining to the Peters family that there’d been no intention to deceive. They, having abundantly more, um, fruits of the spirit than I, accepted the explanation – and substitute pie – with good humour.

Far better humour than I, however, when I learned my wife had decided to right the scales of justice by yet again plundering our store of summer berries and making another pie for the Peterses – this one the genuine article. The saskatoon rack in our freezer now had two gaping holes, like missing front teeth.

I could only hope the youngsters had a good time at their convention.

—Wally Kroeker is editor of Marketplace, based in Winnipeg. He keeps secret his favourite saskatoon picking spots.

Is a fishing lesson enough?