What's New
Through the conflict, life carries on in Ukraine
A FOCUS on Mission
Must Patience Be So Slow?
Harold Jantz: A Heart for the Mennonite Story
Lorlie Barkman: A Life of Creative Engagement
Last Days, First Days
Women in Ministry: Bertha Dyck
January Moment in Prayer “Holy Spirit—Fill Us!”
The Church as the Patient Body of Christ
Advent: Making Much of Jesus: Christmas Day
Home Arts & Culture Persevering after losing it all – twice

Surviving Failure (and a few Successes) 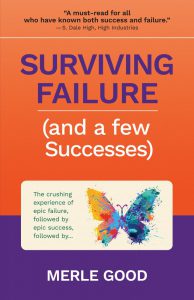 It’s one thing to fail in business; quite another to talk openly about it.

Merle Good and his wife Phyllis suffered the ignominy twice in more than four decades. His new book boldly strips bare the raw impact of seeing a beloved enterprise on the ropes and offers counsel for others on the same journey.

When the Goods formed their company in 1970 to “cobble together a series of arts-related projects into a business,” there was nothing like it in the Mennonite world. The firm grew to encompass book publishing (20 to 40 new titles a year), a stimulating arts magazine called Festival Quarterly, museums, galleries, retail outlets and more.

The Goods hit homeruns with runaway cookbooks compiled by Phyllis. In 2002 her Fix-It and Forget-It Cookbook was the bestselling paperback in the United States, outpacing all other trade paperbacks by more than two to one. Combined sales reached 12 million copies (exceeded only by cooks Rachel Ray and Martha Stewart).

The Good enterprises became a beacon of art and culture among Mennonites who can be shy to recognize art as a faith expression. Untold numbers of poets, writers, painters and craftspeople thrived under their nurturing canopy.

In the mid-1990s, disaster forced them to file for Chapter 11 reorganization, and the Goods were thrust into a toxic new world. They received “threatening and mean-spirited messages,” even from within the faith community. Vicious gossip abounded. Someone told Merle, “I’m sorry for all the terrible things people are saying about you.”

The church offered less solace than one might expect; some leaders sought to have the Goods excluded from membership.

Merle was determined to save staff jobs and repay debts – and ultimately did. Creditors were repaid but were oddly silent when they got back more than they had been owed.

The Goods strove to maintain their personal bearings. Telling themselves “we did what we could” became a lifeline.

“I was scared to smile or laugh, for fear that someone would see me and be upset that I wasn’t taking my failure seriously enough,” Merle writes.

The business recovered, but despite some dramatic successes, like growing 1000% in 2002, more danger lurked. Merle’s recounting is a quick intro to the dizzying world of reprints, returns and remainders.

The couple survived the 2008 recession but five years later succumbed to a perfect storm of e-books, online shopping and plummeting print sales. Small publishers were gobbled up. In 2013 the company went into Chapter 7, another form of reorganization that was equally devastating though “markedly less hostile” than the Chapter 11 reorganization of 1996. (In a Chapter 7 filing, a trustee pays outstanding debts by liquidating assets. A Chapter 11 reorganization involves filing a petition with a bankruptcy court and keeping a business going while creditors are paid over time.)

External forces aside, Merle gamely shoulders blame: “In the end, I was at the controls when calamity struck.”

Who should read this book? For starters, anyone who cares about the interplay of faith and commerce. Businessfolk will find poignant insights into the fragility of success and the ever-looming prospect of failure.

The church, meanwhile, can learn a few things about supporting people in crisis. The Mennonite world (unlike the rule of law) tends to regard business failure as unforgivable. That needs to change, and this candid book may be a crucial first step.

[Wally Kroeker, who has authored several books, edited The Marketplace magazine for 32 years up until his retirement last summer. He lives in Winnipeg, where he is a member of River East MB Church.


This article first appeared in The Marketplace. Used with permission.

Having “the talk” with aging parents