What's New
A FOCUS on Mission
Must Patience Be So Slow?
Harold Jantz: A Heart for the Mennonite Story
Lorlie Barkman: A Life of Creative Engagement
Last Days, First Days
Women in Ministry: Bertha Dyck
January Moment in Prayer “Holy Spirit—Fill Us!”
The Church as the Patient Body of Christ
Advent: Making Much of Jesus: Christmas Day
Advent: Making Much of Jesus: Fourth Advent
Home Life & Faith Beirut explosion: one year later 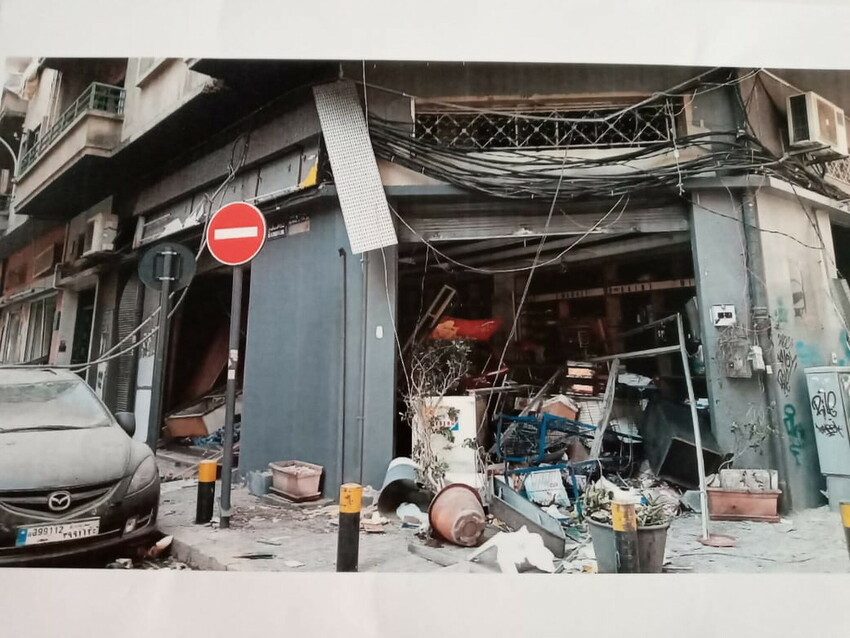 Samir Menassa’s store suffered heavy damage from the Beirut blast; it was within close proximity of the explosion.

By Etienne Chlala and Linda Espenshade

BEIRUT, Lebanon — Samir Menassa remembers when his convenience store used to attract many customers. Located among pubs and restaurants in Beirut, Lebanon, the store was a convenient place for people to purchase a few things they needed as they strolled through the area.

That memory blew up along with a massive explosion of ammonium nitrate at the city’s major port on Aug. 4, 2020. The explosion killed about 200 people and destroyed and damaged buildings throughout the city.

“I was blasted away and ended up on the floor but luckily had no major injuries,” said Menassa, who is in his late sixties. His wife, who was not at the store, also was safe.

But the store was severely damaged. Liquid from jars splattered everywhere. Cans were crushed. Most of the products were unsellable.

“The doors were blasted in. The glass was obliterated, and glass dust covered the entire floor,” he said.

He salvaged the usable food, keeping some for him and his wife and giving the rest to the church for others who were in need. With only $400 in his bank account, he looked for help to fix his store and his house, which also was damaged. Through his church, he was connected to Forum for Development, Culture and Dialogue (FDCD), a Lebanese non-profit organization.

FDCD gave him money toward the repair of his house and helped him to replace glass windows on his shop and the rolling metal shutters. A large supermarket provided supplies so he could restock. 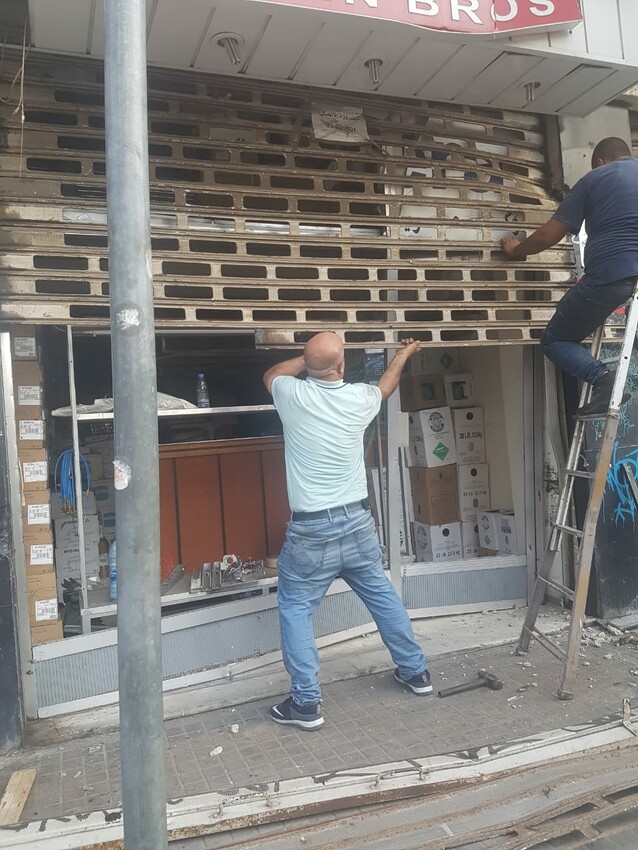 Shop owner Sako, on the ladder, and a friend work together to repair a shutter outside his shop that was severely damaged in the massive explosion of ammonium nitrate in Beirut, Lebanon, in August 2020.
Photo courtesy of FDCD

But he has only a few customers. Many people left the area after the explosion because their houses were damaged. Tourists stopped coming and neighbourhood violence increased, so he now closes his store every day at 4 p.m. He sells just enough to buy food and medicine for himself and his wife.

“I am grateful that my store has been restored, but I would like to see clients walk in like they used to before.”

The explosion is not the only reason Menassa’s customer base has decreased. Lebanon is in a financial crisis, causing the Lebanese pound to lose 80 per cent of its value against the U.S. dollar in 2020. COVID-19 continues to limit people’s movement within the city and the country.

Mennonite Central Committee (MCC) and FDCD have worked together to help repair 55 homes and 14 businesses with stipends of about $1,250 each. Other non-profits also support recovery in different ways, allowing people to combine varied resources with their own to restart.

FDCD gave him $1,250 to help him make repairs on his house. He combined the funds with other non-profit support, his own sweat equity, his now-empty retirement account and loans to make repairs. In April, the house was almost ready for the family to move back in.

Sammour said he would have been even more in debt without FDCD’s assistance. He appreciates that FDCD staff continue to check in with him to see how the repairs are going. 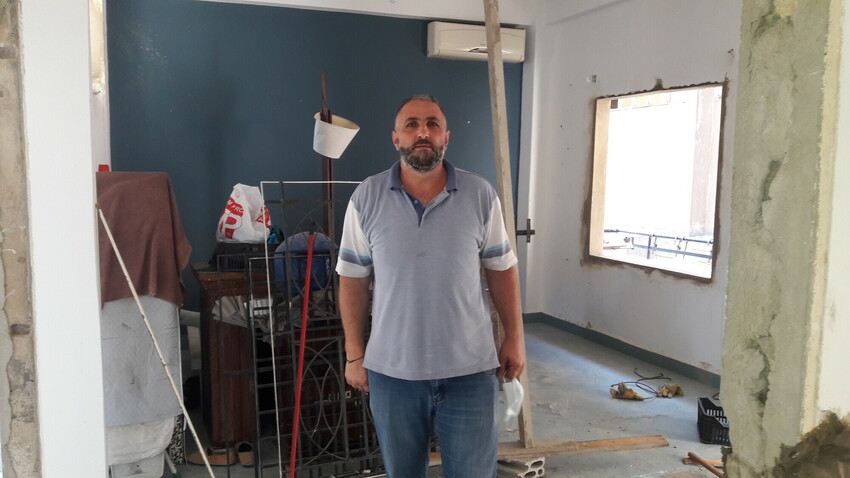 With the reconstruction nearly complete, Hafez Sammour stands in his home that was deeply affected by the Beirut blast.

The crisis in Lebanon is complex and multi-faceted,” said Houch. “The reality is that even middle-class families in Lebanon are struggling just to buy basic necessities like food and medicine. They cannot afford the burden of rebuilding from an explosion.

“Helping families get back into their homes as soon as possible was an essential part of supporting their efforts to begin earning livelihoods again,” he said. “In the same way we wanted to focus on rebuilding small businesses because, for many families, their small businesses are their primary—or even only—source of income.” 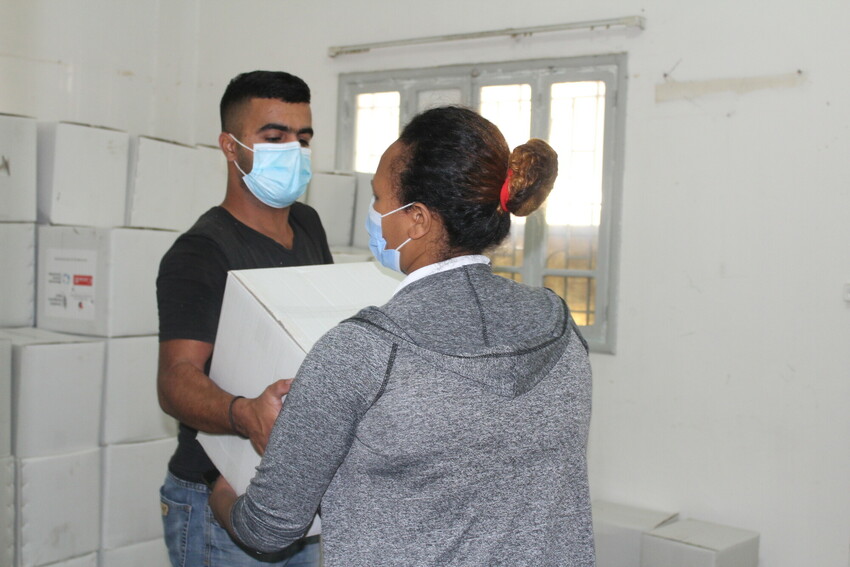 Photo was taken in November 2020 during a second distribution of food kits in the Karantina, Burj Hammoud and Nabaa neighborhoods of Beirut and Mount Lebanon.
Photo courtesy of PARD

Other MCC partners, including The Popular Aid for Relief and Development (PARD), have been distributing monthly food baskets and food vouchers to 1,000 families through December. Both PARD and FDCD have provided social and psychological support to children and adults who were traumatized.

“The task of truly rebuilding Beirut—not just fixing businesses but rebuilding the hearts and souls of Beiruitis—is immense and can feel daunting at times,” said Houch. “But we have seen the passion and dedication of Lebanese people to help one another, as well as the continued support of international partners like MCC. This gives us hope that rebuilding is possible.”