What's New
A FOCUS on Mission
Must Patience Be So Slow?
Harold Jantz: A Heart for the Mennonite Story
Lorlie Barkman: A Life of Creative Engagement
Last Days, First Days
Women in Ministry: Bertha Dyck
January Moment in Prayer “Holy Spirit—Fill Us!”
The Church as the Patient Body of Christ
Advent: Making Much of Jesus: Christmas Day
Advent: Making Much of Jesus: Fourth Advent
Home Arts & Culture No dead wood here

Doing Good Better: How to be an Effective Board Member of a Nonprofit Organization.

Do the math: 10 directors meeting for four hours equals a whole work week.

Businesspeople are often asked to serve on the boards of nonprofit organizations and share their wisdom and expertise (and maybe some of their wealth). With more than a million such well-meaning organizations in the United States and Canada, the potential for good is vast. Here’s some well-placed help for organizations and directors who want to do a better job.

The book has sturdy roots. More than two decades ago (1994) Edgar Stoesz and Chet Raber produced 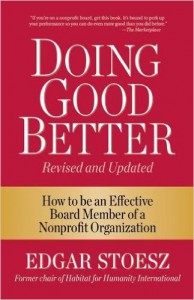 a nifty “board member handbook,” also titled Doing Good Better, which lifted up nonprofit boards as “a part of God’s ongoing work of creation.” It gave basic advice on running meetings and assessing performance and generally showed how to breathe more life into board service. Stoesz has now revised and updated that book.

Stoesz has few equals when it comes to nonprofit boards. He is widely known for his work on the board of Habitat for Humanity International, including four years as chair. He has also chaired the boards of Heifer Project International, the American Leprosy Mission and the Albert Schweitzer Hospital. He has addressed or conducted workshops for more than 200 boards. Here he distills the insights of all that service for a new generation.

He packs a lot of counsel into this highly readable volume. He covers topics like defining and fulfilling the purpose of an organization and the nitty-gritty of nominations, vetting, number of members, term limits and even touchy ground like a board’s dead wood.

On vision statements he says: “Average boards orient themselves around the rearview mirror – precedent is their big thing. They examine everything under the microscope; they want to avoid mistakes. Great boards look through a telescope to planets beyond – at what could be – and ask, ‘Why not?’”

On the issue of change: “Sometimes it is necessary to trim back or even chop down the old trees in order to get sunlight to the young trees.”

How often have nonprofit boards resisted robust self-evaluation because it is unseemly to “measure” social sector performance? “Monitoring and evaluating performance are among the most commonly neglected board duties…. [W]hen you fail to measure, you have no way to track progress, and that is the precursor to discouragement.” A good place to start? With the performance of the board itself, he says, warning that “lethargy in the boardroom spreads like a virus.”

Stoesz brings a sprightly touch. In the chapter on improving meetings, he wryly notes that “Ten directors meeting for four hours constitute one work week,” and adds an oft-missed biblical admonition: “Your meetings do more harm than good” (1 Cor. 11:17). Many meetings can be rescued with the hard slogging of preparation: “A good agenda does not guarantee a good meeting, but good meetings are not likely to happen without a good agenda.”

Likewise the importance of preparing the soil: “If someone brings issues that are not ready for board action,” he writes, “consider it raw meat and send it back to the kitchen!”

And don’t meet endlessly, as long hours do not automatically translate into productive effort. “I deny it,” Stoesz writes, “but I am quoted as having said that the Holy Spirit does not stick around after about 9:30 or 10:00 p.m.”

Briefly but pointedly he addresses dissent, committees, litigation, spirituality, the role of the chair and the importance of policies, which he says are important but work better as servants than masters: “Too many policies make an organization muscle-bound.”

When this magazine reviewed this book’s forerunner in 1994 it said, “If you’re on a nonprofit board, get this book. It’s bound to perk up your performance so you can do even more good than you did before.” That was true then, and now it’s true again.

—Wally Kroeker is editor of The Marketplace, the bimonthly magazine of Mennonite Economic Development Associates (MEDA), an organization whose dual thrust is to encourage a Christian witness in business and to operate business-oriented programs of assistance to the poor. This review was first published in The Marketplace, March/April 2016. Used with permission.