What's New
Leading through the trauma of covid: Part two...
Ask God which town
Where to from here?
CCMBC National Director attends 2022 ICOMB Summit
MCC Canada and MCC Manitoba sell shared property...
The world appears to be growing darker
Sharing a new and unified language
6 reasons to attend the MWC Global Assembly...
One too many
Just one more
Home Life & Faithfeature articles The Light of the world

The Light of the world 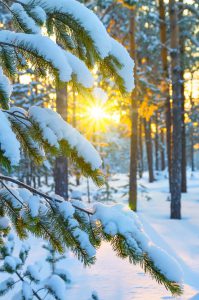 Christmas is a season of lights. They glimmer in candles, glow on trees, are strung into twinkling shapes. These lights, however, only hint at the true light of Christmas – Christ. David Ewert, professor emeritus of Concord College, provides a biblical overview of Christ as the light of the world.

The Bible opens with a powerful command, “Let there be light,” and with that majestic fiat lux, as the Latin Vulgate has it, the darkness that covered the face of the deep vanished (Genesis 1:2,3). And God rejoiced at the creation of light; He said it was good, it was beautiful. He then separated light from darkness, and He called the light “day” and the darkness “night.”

That God created the light before He made the sun, moon and stars, was designed to convey the great truth that the ultimate source of all light is God.

In these opening lines of the creation account, light and darkness are physical concepts. When we come to the New Testament, however, light and darkness take on metaphorical meanings. In the new creation, light stands for salvation, illumination, faith and holiness. Darkness, on the other hand, represents sin, unbelief, disobedience, ignorance and lostness.

In the prologue to his Gospel, John portrays Christ as “the true light,” coming into this dark world of sin and unbelief and illuminating humankind (John 1:9). That doesn’t mean all humanity walked in total darkness from the day our first parents rebelled against God. Rays of divine light constantly penetrated the darkness of human history. In fact, John presents Christ, the Word (logos), as shining in the darkness of sin and rebellion, and, in spite of human resistance to this divine light, “the darkness did not overcome [the light]” (John 1:5). The darkness did not put it out.

Before the true light, Christ, broke forth in all its salvatory brilliance, God sent a messenger to prepare for the great event. “There was a man sent from God, whose name was John. He came as a witness to testify to the light, so that all might believe through him” (John 1:6,7). Before John the Baptist was born, his father defined his mission as a bearer of the light of salvation “to those who sit in darkness and in the shadow of death” (Luke 1:79).

Once this Forerunner completed his work, Jesus came upon the scene. He left His home in Nazareth and settled in Capernaum, in Galilee, the land of the Gentiles. Matthew describes Jesus’ mission in terms of a prophetic word from Isaiah 9:2, “The people who sat in darkness have seen a great light, and for those who sat in the region and shadow of death light has dawned” (Matthew 4:15,16).

How can it be said that the true, or genuine, light enlightens every human being? One suggestion is, He gives all people the capacity to think, to reason, to worship, to respond to God, to hear the voice of conscience. God has revealed something of Himself to all humankind (Romans 1:20), and people are accountable for the way they respond to God. Theologians might speak of this as “general revelation,” in contrast to God’s “special revelation,” given earlier to patriarchs and prophets, and in the fullness of time in Jesus Christ.

However, the enlightenment that John seems to have in mind is the enlightenment that leads to faith. Christ dispels the darkness of sin and unbelief and offers fallen humanity the light of salvation. He came “a light into the world” so that whoever believes in Him “may not abide in the darkness” (John 12:46). Sadly, as John 1:10 clearly indicates, not all respond to the light with a hearty Yes, but prefer to remain in darkness. Jesus Himself complained that “people loved darkness rather than light” (John 3:16). Paul explains that Satan stands behind this rejection of light of life. “In their case the god of this world has blinded the minds of the unbelievers, to keep them from seeing the light of the gospel . . .”(2 Corinthians 4:4).

With the coming of Christ, “the darkness is passing away and the true light is already shining” (1 John 2:8). The call of the gospel now is, “Rise from the dead, and Christ will shine on you” (Ephesians 5:14). Those who respond to the light in faith and obedience, are then called upon to “walk in the light” (Ephesians 5:8). Also, they have been called out of darkness into His marvellous light “to proclaim the mighty acts of God” (1 Peter 2:9).

When Paul was stopped in his tracks outside the gates of Damascus, the commission Christ gave him was defined as turning Gentiles “from darkness to light and from the power of Satan to God” (Acts 26:18). This remains the calling of the church until the last day breaks and earth’s shadows flee away.

Once we enter the gates of the eternal city, there will be no more darkness, no more night. There will be no need of sun or moon, “for the glory of God is its light, and its lamp is the Lamb” (Revelation 21:23).

Advent, an invitation to wait