What's New
Through the conflict, life carries on in Ukraine
A FOCUS on Mission
Must Patience Be So Slow?
Harold Jantz: A Heart for the Mennonite Story
Lorlie Barkman: A Life of Creative Engagement
Last Days, First Days
Women in Ministry: Bertha Dyck
January Moment in Prayer “Holy Spirit—Fill Us!”
The Church as the Patient Body of Christ
Advent: Making Much of Jesus: Christmas Day
Home News Sponsors needed for Syrian refugees

It’s easy to hear the smile in Hanan Talabeh’s voice. Even over the phone it’s obvious she’s thrilled— months after her family arrived from Syria. Talabeh’s sister-in-law, along with her three children, landed at the Ottawa airport on July 22, one year before they expected an answer on their refugee application.

Last year, Talabeh worked to sponsor her family with the help of Mennonite Central Committee (MCC) Ontario’s refugee coordinator, Moses Moini. When they submitted the application the expected wait time was 18 months.

One reason the process moved so quickly is that Talabeh’s application was filed as a Ministerial Priority case. Last year MCC Ontario submitted 10 applications in that category, and all of the families have arrived. The government is putting high emphasis on settling Syrian refugees, and for Talabeh that speed was a relief. “First time in my life I had good luck,” she says.

Her sister-in-law Hanadi, along with her three children Sara, Lara and Jaafar (last names withheld for security reasons) had fled their home in Damascus, where Talabeh’s brother was killed by a sniper. The family stayed with friends in Saida, Lebanon as they waited. 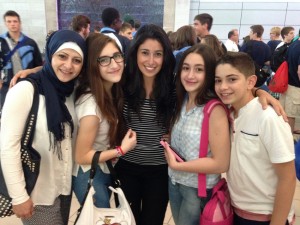 Hanan Talabeh’s family arrived as refugees from Syria this summer, they were met at the airport by Talebeh and her daughter Nada. From left Hanadi, Lara, Nada, Sara and Jaafar. (photo courtesy of Hanan Talabeh

While Lebanon is currently stable, displaced people live with fear that the violence they fled might follow them. “We were scared,” says Talabeh’s 16-year-old niece Sara, “you know that in Lebanon anytime it will be war.”

Now that she’s in Canada, life is more secure. “It’s an amazing place to live in, it respects a person, and it’s clean and the atmosphere is very good. Peaceful,” she says.

Sara now lives with her brother, sister and mother, in a townhouse just five minutes away from her aunt, who is supporting the family until they’re independent. “It is lots of financial pressure” Talabeh says, “but it brings us happiness and peace of mind in another way.”

The family is working on improving their English, learning their way around a new city and adjusting to life in Canada. “Every day I ask them how do you feel?” Talabeh says. “Every day it’s getting better.”

When friends heard that she had brought her family to Canada they asked how to do the same for their own family and friends. “Everybody wants desperately to get their loved ones out of Syria,” Talabeh says.

MCC is looking for congregations and other groups willing to sponsor refugees from Syria. Contact your local MCC office to find out how you can help.