What's New
Through the conflict, life carries on in Ukraine
A FOCUS on Mission
Must Patience Be So Slow?
Harold Jantz: A Heart for the Mennonite Story
Lorlie Barkman: A Life of Creative Engagement
Last Days, First Days
Women in Ministry: Bertha Dyck
January Moment in Prayer “Holy Spirit—Fill Us!”
The Church as the Patient Body of Christ
Advent: Making Much of Jesus: Christmas Day
Home Life & Faithfeature articles Snapshots of Camp Evergreen 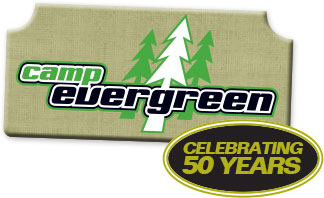 In 1953, I returned from college to find I’d been elected to the Alberta MB Conference’s (ABMB) youth and music committee. We decided that instead of holding our annual youth rally in a church, why not rent a camp?

Young people (in the form of church choirs) went to Southern Alberta Bible Camp for a weekend in 1954. In 1955 or 56, ABMB began a summer program there, later hosting programs in Okotoks, Alta. When the present site became available in 1963, there was strong support [to purchase it and build our own camp to run programs]!

One of the unique things about Camp Evergreen is the many groups it hosts in the non-camping season. Kids who come to the outdoor education
programs, where the camp can’t be direct in gospel ministry, often return to summer camp where Christianity is openly discussed.

On the board since 2002, in 2008, I indicated it was time for younger people to take over, and they have. A few years ago, my wife and I pulled our trailer to camp, just to encourage and help out. When I look at new director Bob Kroeker (so many abilities!), program director Courtney Armstrong (a godsend!), and office manager Pauline Reimer (a blessing!), I can’t help but get enthused about the possibilities.

I’ve encouraged the camp to keep in touch with our Bible schools to give young people opportunities for hands-on ministry at camp. I believe that’s the future of the camp – and of the church as well!

We have business people who see Camp Evergreen as an investment that reaches beyond the doors of the church. The camp owns 480 acres of parkland. The potential is unlimited: with the right kind of interest, new phases of ministry could be developed to lead people to the Lord.

In 1970, our 10-year-old son went to Camp Evergreen. I (Irene) heard kitchen help was needed, so we volunteered to go along. The old gas stove, discarded by Coaldale (Alta.) hospital, was enough to drive any sane cook to distraction. Good thing there was a fabulous bakery in Sundre!

I remember a horse running away with a young, inexperienced rider. The rest of the frightened group prayed very hard for the girl to be okay. The horse was stopped by a quick-thinking counsellor, and the whole cabin of girls became firm believers in God’s ability to answer prayer. 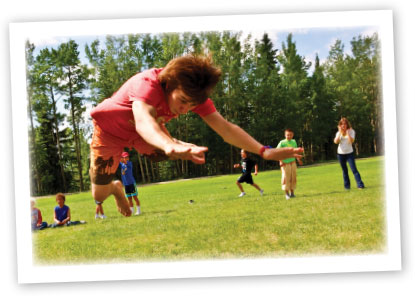 The camp had a definite mission: to teach our children and young people about Jesus Christ and to lead them to give their lives to him. Cabins have been insulated and there’s a trained chef in the kitchen, but the original message is still the same: Jesus died for each of us and we are welcomed to become part of God’s family.

I love the wilderness, so camping ministry has always excited me. When my Sunday school teacher  became a camp director, he was my hero. The year I was a teen staff helper at a camp, I felt close to God for the first time when we sang “How Great Thou Art” around the campfire.

I came to Alberta because I was courting Betty: she was working at Camp Evergreen, and I was interested in camp – and in her!

I was music leader, counsellor, and program director, and very quickly the camp asked if I’d become full-time director and expand the program. It had been only a summer program, but while I was there, it became year-round. We had our first seniors program, and we invited school groups to come. 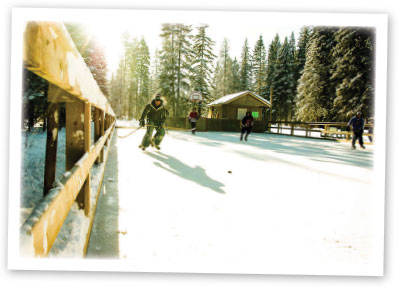 The friends Betty and I made in the MB churches are still precious; so many great people sacrificed to make camp happen. I was not only director but the maintenance man, and people volunteered their time, machinery, and expertise to teach me.

Many times, registrations were coming in but we wouldn’t have enough staff. I prayed so fervently that God would meet the need; sometimes I got desperate and didn’t trust, but God always provided.

My favourite times were around the campfire on the last day when campers would share how God had met them.

I continue to pray that more people would step up to finance the ministry, that the camp wouldn’t lose its fervour, and that God would direct every step of the way. At the 50th anniversary, I’d love to see God revive the mission – and enhance it!

My three summers at Camp Evergreen were the toughest, yet most rewarding, in my life.

With staff from across Canada, and as far as Kenya, South Korea, and Papua New Guinea, I saw the church in its multicultural makeup struggle with differences, yet work together. It was a powerful witness to me and to campers.

I saw staff members begin as shy, insecure kids, and over the course of one, two, or three summers, mature and blossom. As they shared with campers that Jesus wants to be our friend, they came to realize the gospel was true for them, too! Those staff members have become deeply committed followers of Jesus and joyful servant-leaders in the church. 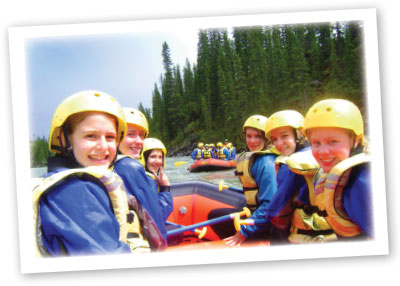 I remember the first camper I led to Christ. When I asked if he wanted Christ in his life, a light twinkled in his eyes as he said “yes.” That was the moment the Holy Spirit entered his life. We prayed, but it was already a done deal.

In 2011, before camp started, as we prayed over the cabins, I was holding my young son, who was babbling “thank you” over and over. That week, when the speaker gave an opportunity to accept Jesus, more than 80 kids stood up. This was not an emotionally charged service, just a simple opportunity to respond. Staff had never seen so many respond at once! I believe when we were praying, my son was saying “thank you” in advance for what God was going to do. Someday, I will ask God if my son said one “thank you” for each child that stood up. 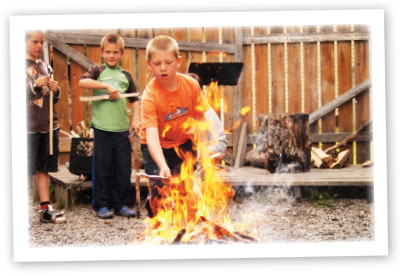 It was a big decision for me to leave home (Winnipeg) for two months, but I had such a great time with new people and experiences, when they invited me to come back the following year, I said “yes.”

When I was asked to run the marksmanship program, I didn’t know I was stepping into someone else’s area; she was determined not to like me, but God had a different plan because by the end of the summer, Jonquil Born and I were dating, and two years later, we got married! Now we live an hour from Camp Evergreen, where our boys enjoy summer camp and I serve on the board.

My camp story is a generational one. My dad attended Camp Evergreen at six, the year it opened, and worked as a counsellor in his 20s. As soon as I was old enough, I took the counsellor-in-training program because I so badly wanted to work at camp too. Now our kids talk about how they want to work there. We are truly blessed to have such a rich spiritual influence in our lives.

At 12, I went to a Bible camp for the first time. I had no idea who God was. The second year, chapel hit me like a ton of bricks and I was super curious about this Jesus guy. At the end of the week, I decided to follow Jesus. I went back to camp three more years. It would be fine and dandy till I was home a week, and then life would get hard again. 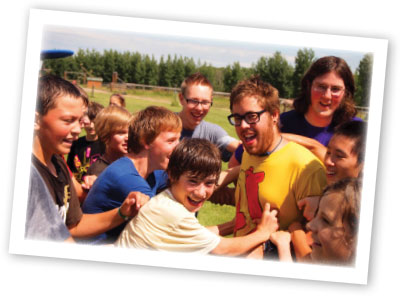 On my 19th birthday, I got drunk and closed the pub. I remember lying on the sidewalk and thinking: there has to be more to life. I decided I either had to give up this “God thing” or pursue it. So the next Sunday, I walked into a church. My mom would call me 15 times while I was at church or young adults to tell me I was becoming brainwashed.

I started getting involved with youth, and when I was deciding what to do with my summer, my mentor suggested Camp Evergreen. Program director Courtney Armstrong contacted me in April, and by May 1, 2011, I was taking challenge course training. I’d never experienced God saying “You will go here,” but with Camp Evergreen, it was so clear!

I was overwhelmed by all these Christian people. I didn’t understand how they had everything together when my world was falling apart. I didn’t know how to accept God’s love: how could he love me when it felt like even my parents didn’t?

Spring 2012 broke me. I was on a path of destruction: I had to choose Evergreen or the highway. One conversation hit me: interim executive director Andrew Baerg said, “We are all screwed without God.” I chose to believe that God could triumph over the darkness. The last week of summer 2012, I was baptized at camp.

If it weren’t for camp, I’m not sure I would be alive, and I know I’m not the only one with this story. At camp, I was accepted for who I was; I was broken and someone showed me Jesus. 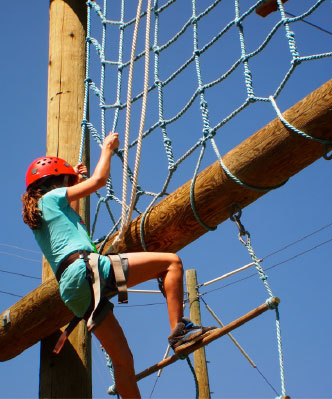 “Evergreen has a lot of non-church groups and we can’t openly preach; however, we’re conscious that our actions need to portray Christ. God begins to work and we see real change: staff who were terrified of public speaking are up front providing leadership; relationships with God grow so we see Christ reflected in their personality.

At our junior high retreat in February, I was impressed by the dedication of our former staff: we had more volunteers than we needed! One from Princeton, B.C., (a 9 ½ hour drive!), used his time off to help us out. He grew up coming to Evergreen, and spent seven years on staff. Even though he’s working at another camp, he still considers Evergreen his ‘home camp.’

We are discipling and training leaders for our churches; it’s exciting to see their desire to serve! 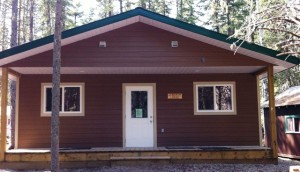 Camp Evergreen is partnering with Mennonite Disaster Service (MDS) to stretch donation dollars toward completion of the Cabin Fever project. Camp Evergreen’s sixteen 40-year-old cabins that sleep 7 are being replaced with 10 cabins that sleep 12 and can be subdivided into 2 rooms, 4 of which are projected to be ready for use this summer. July 21–Aug. 17, MDS volunteers will frame the remaining 6 new cabins. Camp Evergreen must raise $150,000 to ensure the building materials are on-site. The new cabins are each named in honour of a founding ABMB church (e.g., Coaldale Cottage, Dalhousie Den).

At 80, Columbia is still pursuing the mission