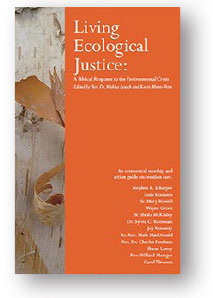 Living Ecological Justice: A Biblical Response to the Environmental Crisis

Sustainable. Green. Climate change. These words have become commonplace in our vocabulary, and there’s no shortage of opinions when any is used. Representing one rapidly growing perspective on ecological responsibility, Citizens for Public Justice’s (CPJ) latest book Living Ecological Justice: A Biblical Response to the Environmental Crisis takes on this timely hot topic.

Living Ecological Justice’s message is threefold: we must protect that which we love (creation); the biblical witness calls us to creation advocacy; and creation care and advocacy are ways we can participate in God’s work in the world. According to the editors, the book is intended both for those who are active in creation care advocacy and those who may not have considered ecological issues.

The 13 short essays are well written with accessible language and style; most draw the reader to a renewed appreciation for the creation in which we live. Each roughly two-page essay is followed by discussion questions, prompts toward action and a prayer. Set up to promote discussion and action in smaller rather than larger groups, it makes a great resource for church study groups. Indicated in the introduction, the CPJ editors intend this short compilation to be used for corporate times of worship, small group settings or perhaps for personal reflection.

Living Ecological Justice’s essays are all by different authors. I couldn’t help but be excited by the range of authors (detailed in contributor biographies at the back): a professor at the University of Toronto, a farmer, a teacher, clergy (from various traditions) and more round out the contributors, proving it’s not just tree-hugging, dreadlock-wearing agrarians who are thinking about ecological responsibility.

Potato farmer Wayne Groot points out some of the problems associated with human disconnect from the rest of creation, especially our food sources. Groot reflects on experiences in his garden where he feels the dirt between his toes and is drawn to reflect on the complexities of the soil that brings forth life. He calls us back to the garden as this is “where we reflect on ‘our daily bread,’ given to us each day, and to think about our relationship…with each other, with creation and with the Creator.”

As can be expected when one broaches the topic of creation advocacy and responsibility, big oil becomes a target. Though I agree with some of the authors’ assessments about our over-dependency on fossil fuels, I cannot help but also be critical of some of the alternatives CPJ offers (including solar, wind, geothermal and hydroelectric power), all of which have been destructive to creation in unique and unforeseen ways.1 Questioning our dependency on oil is a good thing but not at the expense of ignoring potential damage caused by alternate means of energy.

One great question this book asks is “How realistic are our expectations that we can sort [ecological problems] out with technology?” This question opens a much larger subject that cannot be fully appreciated here, but the authors likely want the reader to conclude, with postmodern skepticism about technology’s ability to solve our environmental problem, that it cannot help us as much as we want it to.

Having come to this conclusion about technology, one might expect it would follow that one would come to a similar conclusion about our government’s ability to save us from ourselves. This is not so in Living Ecological Justice. In fact, the editors go so far as to say that lobbying for change at all levels of government and realizing policy change is “the most critical and will have the most profound, lasting impact on the Earth.”

It seems, in CPJ’s exuberance to promote creation care, they have come to a misplaced soteriology, one in which we redeem ourselves through better policy and action. Don’t get me wrong, I believe better policies need to be in place, but I am hesitant to celebrate better policy as though we can somehow usher in Christ’s creating and redeeming work in the world on our own merit.

Overall, this book can be a significant resource prompting Christians who are already thinking about creation care toward further action. For those who are not convinced that, as part of creation, we have any role to play, this book will not likely be convincing.

I was more than a little disappointed with CPJ’s practice-oriented treatment of creation and creation care. It seems that CPJ is catering too much to people who just want to know what to do when it comes to ecological responsibility.

Deep, theological reflection that informs praxis is largely absent from North American popular Christianity and from this book. I strongly recommend resources such as Wilson’s and Wirzba’s books for Christians to first establish the necessary groundwork and grammar for the conversation that CPJ has invited us to participate in.

—Gary Wiebe is a member of Parliament Community Church, Regina. He resides in Three Hills, Alta., with his wife and three daughters and is studying toward a BTh at Prairie Bible College.

Support for small-scale farmers critical in dealing with...