What's New
A FOCUS on Mission
Must Patience Be So Slow?
Harold Jantz: A Heart for the Mennonite Story
Lorlie Barkman: A Life of Creative Engagement
Last Days, First Days
Women in Ministry: Bertha Dyck
January Moment in Prayer “Holy Spirit—Fill Us!”
The Church as the Patient Body of Christ
Advent: Making Much of Jesus: Christmas Day
Advent: Making Much of Jesus: Fourth Advent
Home Arts & Culture Secrets uncovered in memoir 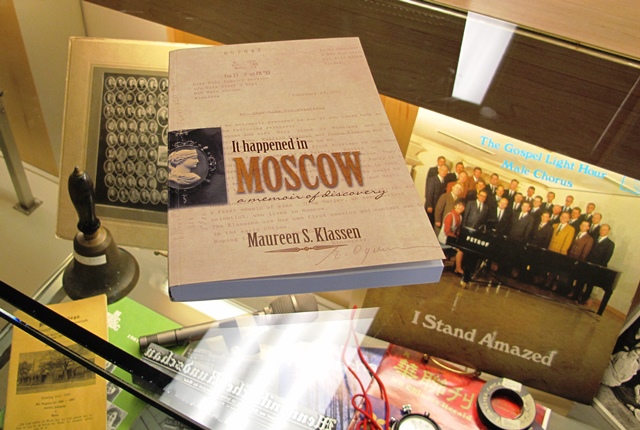 In the last century, many Mennonites in Russia survived World War I, revolution, civil war, anarchy, famine, epidemic, Stalin’s slave labour camps, forced relocation, World War II, emigration, and the rigours of establishing new lives in Canada. Along the way, there were many liaisons, secrets, terrors, mystery children, and stories too difficult to tell.

In Ambassador to His People: C. F. Klassen and the Russian Mennonite Refugees (1990), Maureen Klassen focused on the life of her father-in-law, statesman C.F. Klassen, a widely known and respected late Mennonite Brethren leader. It Happened in Moscow, a project of the Historical Commission, published by Kindred Productions, tells the story of his wife, Mary Brieger Klassen, a Baltic Lutheran whom C.F. met in the Mennonite Centre in Moscow in the 1920s when she worked there as secretary.

Mary lived and worked in Moscow with her young child while her husband Jakob Reimer was sent to an engineering post in Tashkent. The marriage soon dissolved. Jakob created a new family with a woman he met in Tashkent who gave birth to a daughter Erika. Divorce was relatively easy in Soviet times and Mary ended the marriage to Jakob. She was free to wed C.F. Klassen who adopted her son Harold. In 1928, they emigrated to Canada where C.F. continued to be a Mennonite leader until his untimely death in 1954. C.F. and Mary had another four children together.

The highlight of the story is Erika’s search for her half-brother Harold Klassen (who lives in Canada) and their reunion in 1993 in Moscow where author Maureen and her husband Herb (Harold’s half-brother) were working at the newly formed MCC centre (later moved to Zaporozhye). For the first time, Harold saw his parents’ wedding picture and photos of his biological father – about whom he had no knowledge – holding him as a child. The mystery of their lives unfolded in letters Erika writes about her past to Harold in Clearbook, B.C., and during Maureen’s subsequent searches of old Soviet records concerning Jakob Reimer’s interrogation and execution in 1937.

The book also tells of Mary’s life raising four little ones in Winnipeg as a single parent while C.F. criss-crossed the country, collecting the travel debt (Reiseschuld) for the CPR. He also worked in Europe helping Mennonite refugees emigrate. Mary moved the family to Clearbrook where she lived in the “glass house” son Herb built for her (now the Mark Centre). After C.F.’s untimely death in 1954, she supported herself by taking in out-of-town students attending Mennonite Educational Institute.

Fact is indeed stranger than fiction. This story fills in more gaps about the Klassen family and also about the many lost ones who stayed in Russia and suffered under Stalin. It also reminds us of the silence surrounding many of the secrets of our own past, and perhaps will motivate us to research and learn more about our own ancestors. I couldn’t put the book down.