What's New
Through the conflict, life carries on in Ukraine
A FOCUS on Mission
Must Patience Be So Slow?
Harold Jantz: A Heart for the Mennonite Story
Lorlie Barkman: A Life of Creative Engagement
Last Days, First Days
Women in Ministry: Bertha Dyck
January Moment in Prayer “Holy Spirit—Fill Us!”
The Church as the Patient Body of Christ
Advent: Making Much of Jesus: Christmas Day
Home Arts & Culture Family secrets 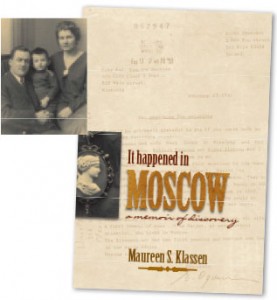 “I will open my mouth with a parable,” sings the psalmist; “I will utter hidden things, things from of old…. We will not hide them from their descendants; we will tell the next generation the praiseworthy deeds of the Lord, his power, and the wonders he has done” (Psalm 78:2, 4).

But apparently not all deeds can be brought into the open. Even the psalmist recognized that some wonders might remain hidden: “How can we sing the songs of the Lord while in a foreign land?” (Psalm 137:4).

Grief, trauma, and exile often lead to concealment, to family secrets. This has been a strong theme in the emerging literature of the Russian Mennonite story, from Peace Shall Destroy Many (Rudy Wiebe, 1962) to This Hidden Thing (Dora Dueck, 2010). But it is more than a mere Mennonite quirk. Indeed, it is intrinsic to the human condition. Or why would Adam and Eve be hiding in the garden?

My father, Harold Klassen, first told me his secret when I was 13. It was a junior-high homework assignment: find out about your family tree. I pulled out an old black family Bible that was tucked away on dad’s bookshelf, and was excited to find all sorts of information about C.F. Klassen’s family, his relations, and indeed even about his wedding: the anniversary date (11 September), who preached, sermon texts, and so on. But behind the date, the year of marriage was missing.

I asked my dad about this. He was evasive – and I was puzzled. How could someone with as keen an eye for numbers as my dad (who was a quintessential “bean-counter”: accountant, church treasurer, and inveterate “pacer-off” of any new room or yard he chose to visit) – how could someone like him not know when his own parents were married?

I pushed back, and he eventually told me that his parents were married in 1926, just before his third birthday. He offered me a few details (the few that he knew) about his birth father, but I wasn’t interested – or maybe, ready – to hear it at the time. I certainly didn’t want to hear the man’s name. The only detail that stuck with me was that dad was to have been called “Harold Paul” at his birth, but the Communist authorities had newly forbidden second names as bourgeois.

And so I assumed that Dad’s birth father was named Paul. All other details remained a secret.

Grandma (Mary Brieger Klassen) was still alive at the time; it would be only a matter of months before she would be released from her paralysis, after years of being bedridden, and see the Saviour she had served her whole life. Communication with her was difficult, at least for us grandchildren, somewhat intimidated by her suffering and immobility. She knew those secrets, had held them close to her heart all those years.

Perhaps there was for Grandma a comfort at not being able to speak them anymore, even if it came at the cost of hardly being able to speak at all. In any case, on a dreary day, December 16, 1976, exactly 50 years, 12 weeks and 2 days after she pledged herself to C.F. in Moscow, Grandma breathed her last, and took her secrets to the place where there are no secrets, and all is mercy.

Dad was content to live with the unknown – or perhaps the word is resigned. I have no doubt that these unknowns, these uncertainties, shaped his character and his life’s journey in profound ways. And if his, then also mine and my siblings, and on through all other family and friends who were touched by our father’s life.

And so it is that the remarkable, providential journey of discovery chronicled in Maureen’s book It Happened in Moscow is a story for us all. Remarkable that Maureen and Herb would move to Moscow in the 1990s. Providential that Erika’s lifelong passion to find her brother would bear fruit while he was still alive, and that Dad was able to have two years to process his newfound identity before cancer returned and he was, as the biblical phrase goes, “gathered to his fathers.”

Maureen has done us all (but especially those of “the tribe of Harold”) a great service in crafting this memoir of discovery: probing the life and character of a man who was virtually unknown to his firstborn son, outlining the grace-filled contours of one woman’s extraordinary life. But above all, uncovering the fingerprints of the divine hand during some of the most ominous upheavals of the twentieth century.

This tale is a story of secrets revealed, yes. But perhaps the greatest revelation is that in the midst of an ever-changing world of revolution and war, suffering and exile, migrations, marriages broken and renewed, there is One who endures as Emmanuel, which is “God with us.”

—Randy Klassen is a Bible instructor at Bethany College, Hepburn, Sask. This article first appeared in the Mennonite Historian, a publication of the Centre for MB Studies and the Mennonite Heritage Centre, both of Winnipeg.

At the Scent of Water: The Ground of...