What's New
Delete or not to delete, that is the...
Believers bring water for drought baptism
Encouragement to those in the arena
Keeping attention and making an impact: A few...
Open hands to reconciliation
From the editor
Approaching truth and reconciliation with love in our...
MB Seminary offers new MA in Transformational Leadership...
Multiply August Ukraine Updates
Book Review of Return Stroke: Essays & Memoir...
Home Life & Faithfeature articles Schools & agencies celebrate growth, innovation, new faces at Gathering 2012

Mennonite Brethren Biblical Seminary (MBBS) Canada is “ours” – a new school for a new age; “no longer a place, but a presence,” says president Bruce Guenther. 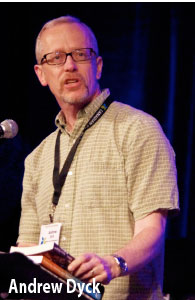 The seminary serves the conference by educating and equipping leaders through partnerships to extend its reach and facilitate inter-denominational collaboration. Eight core online courses available to all (the first four rolled out this fall) teach foundational evangelical-Anabaptist theology.

“Theological education is an integral part of discipleship. We do this together,” says Guenther. MBBS’s growing team includes Brian Cooper – who values “being a pastor” in his role as professor and dean – and Andrew Dyck (beginning at CMU in January), who is excited to encourage students to “become people of depth in capacity for prayer and being attentive to God, Scripture, hearts, and the lives of others around them.”

Board chair John Unger and Guenther acknowledged the sense of loss for those who participated in the international yet familial experience of seminary at the Fresno, Cal., location. He highlighted current leaders like Willy Reimer and Paul Loewen who graduated from MBBS, and lesser-known but no-less-faithful servants like Ruth Lienhart, a Swiss woman who studied at seminary and went on to work on Bible translations in West Africa. 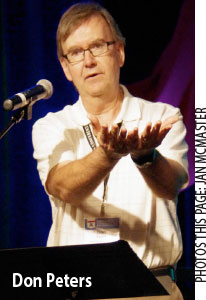 Canadian Mennonite University’s (CMU) interim president Earl Davey sees “evidence daily of the Holy Spirit – of hearts and minds transformed; people inspired to action in the kingdom of God.” He invited Canadian MBs to “go to our website, identify a faculty member or department, and pray that God would continue to work.” The school of some 900 full-time students on two Winnipeg campuses celebrates a new president (Cheryl Pauls begins in November), a new school of business endowed by the Redekop family, and a new graduate school of theology and ministry in collaboration with MBBS.

“It’s tough being a 13- to 28-year-old these days,” says retiring Columbia Bible College (CBC), Abbotsford, B.C., president Ron Penner. “Faith itself is considered an option, but young people are still interested in spiritual questions.” A key strategy in CBC’s goal to help students find answers to those questions is building bridges to others schools, enabling them to study at CBC, then transfer credits to institutions such as Trinity Western University, University of the Fraser Valley, or CMU. Intercultural studies professor Bryan Born’s appointment as president will be ratified in October, and he will commence duties in January.

École de Théologie Évangélique de Montréal (ETEM) president Kristen Corrigan is grateful for provision beyond her imagination after a difficult year: the small school’s relationship with the University of Montreal was terminated abruptly, and it lost beloved faculty member Éric Wingender to a sudden death. Now, a new association with Laval University in Quebec City allows ETEM to offer a full BA, and provides greater funding and opportunity for expansion of courses into new locations in the future. Boards continue to explore the merger with partner school IBVIE, as together the institutions roll out an experiential learning program targeted at 19–24 year-olds, and a new recruitment system.

Mennonite Central Committee (MCC) felt the winds of restructuring: Mar. 30, 2012, MCC binational held its final governance meeting to transfer all responsibilities to MCC Canada or MCC U.S. “There is weight,” says MCC Canada executive director Don Peters; “this is no light task,” but he recalls the great cloud of witnesses in Hebrews 12 to spur faithfulness. CCMBC’s representation to MCC has changed: from seven appointees, there are now two (one vacant at press time). Moderator Paul Loewen, executive director Willy Reimer and appointee David Chow (Killarney Park MB Church, Vancouver) are representatives in the pool of candidates at the Canadian Council of Anabaptist Leaders. 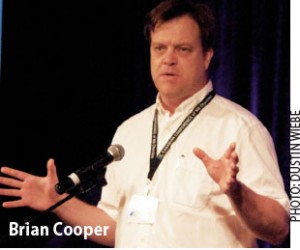 The measurement committee is an initiative of the executive board to assess the effectiveness of national programs. The committee’s first assignment was to evaluate Regenerate 21-01, launched in 2008. Sam Reimer listed “key learnings: collaboration, communication that is simple and clear, implementation with clear goals.”

This is our understanding of Scripture now, but “we are always open to receiving more light,” said David Ewert at the end of a 1980s study conference, brought to Gathering 2012 via video clip. MB Historical Commission’s work is one of “spiritual discernment: looking carefully at both the ordinary and spectacular events of the past so that MBs can better recognize God’s presence and leading today,” says outgoing executive secretary Andrew Dyck. In the past biennium, that has included publication of four books, several “Profiles of the Mennonite Faith,” and financial assistance for the India MB centre. Incoming executive secretary Jon Isaak will guide development of grants for students and researchers interested in studying MB women, and the publication of MB history books online.

Mission work has shifted from “addition to multiplication,” says MB Mission general director Randy Friesen. The organization equips leaders to equip others. Attitudes have changed from expecting missionaries to be in charge, to being equal partners and extending resources for the benefit of all. No longer does mission only flow from the West to the Two-Thirds world, but servants come from everywhere to everywhere, and mission is not about location but a way of life for those who follow the way of Jesus.

MB Mission’s focus on “the least-reached” is accompanied by “missional DNA,” holistic church planting, and humility. “We will be the learners – here in North America – not the teachers,” says Friesen.

The board of faith and life (BFL) plays a consulting role to CCMBC leadership, as “members and servants” says chair Brian Cooper. As part of their mandate to engage in conversations about theology with partners and churches, the BFL sponsors a biennial study conference and a yearly pastors credentialing orientation. As well, the BFL will be embarking on a review of the Confession of Faith – “scheduled maintenance,” says Cooper. “We do not assume everything is as it always was,” he said, again citing the late MB scholar David Ewert: “Scriptures don’t change, but our understanding of them changes.” The delegation passed a resolution to accept a Memorandum of Understandng allowing U.S. and Canadian BFLs to adapt the Confession of Faith separately to reflect their differing national contexts.