What's New
Delete or not to delete, that is the...
Believers bring water for drought baptism
Encouragement to those in the arena
Keeping attention and making an impact: A few...
Open hands to reconciliation
From the editor
Approaching truth and reconciliation with love in our...
MB Seminary offers new MA in Transformational Leadership...
Multiply August Ukraine Updates
Book Review of Return Stroke: Essays & Memoir...
Home Life & Faithfeature articles Retirement: a season of service

Retirement: a season of service

Retirement involves more than jetting off into the sunset in search of the perfect beach chair at a five-star resort. It’s not an extended holiday; it can be an opportunity to serve like never before.

Here are 10 seniors from Canadian MB churches who are using their older years – free from work schedules, mortgage payments, the demands of raising a young family – to care for and support others. Instead of just finding a spot to relax in the sun, they are searching for places to bring glory to God. 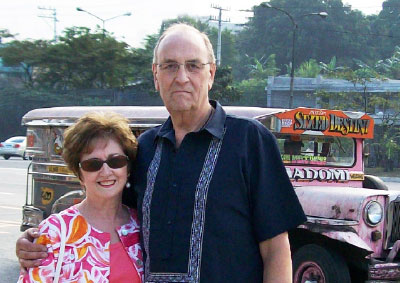 “Turning 65 was like becoming a newborn baby. We’ve done more, experienced more, and loved more since we turned 65 than all the years before. My only regret was waiting until I retired to do this. The world was ready to put us out to pasture, but the Lord was just beginning our most fulfilling experiences of our lives.” —Bill Stevens

When Bill and Jacquie Stevens retired, they sold their condo, cars, and material goods, then travelled to the Philippines with Overseas Missionary Fellowship International where they spent 11 months ministering to squatters in Welfareville, Balik-Balik, and Cogeo near Manila, and in Calapan, on the island of Mindoro.

“A squatter is someone who erects a residential building on someone else’s land, knowing it isn’t their property but hoping the owner won’t kick them out,” explains Bill. “In the Philippines, this usually means a piece of land no one else wants, for example, beside the railway tracks, under a bridge, or beside the water. During heavy rains, many squatters get washed out to sea.”

Bill and Jacquie taught marriage enrichment seminars through the local Philippine church. Over the course of their ministry, 12 couples were convicted that they needed to get married, and 12 more renewed their vows.

Officializing a marriage can be difficult for squatters, who often lack the proper documentation and needed finances. When the news of the nuptial barriers travelled back to the Stevens’ church, Gateway Community (MB) Church, Lower Sackville, N.S., the congregation banded together and raised the finances to pay for a mass wedding.

Gateway members paid for a hot and cold buffet, and the hall, report the Stevens, and each couple received a congratulatory card, a monetary gift, and one night in a hotel with breakfast in the morning. “A local believer offered a discount on the hotel, and when our caterer, also a believer, saw the plastic tables and chairs, he sent his men to bring in all the necessary accessories to transform the setting into a fairy tale wedding at no charge.”

Now back in Nova Scotia, the Stevens’ missionary hearts continue to serve. Bill and Jacquie make themselves available to pastors, visiting missionaries, struggling neighbours, and family. They are excited to remain available to God and wonder if his plans will include more overseas mission work.

“We know God wants to use us,” says Bill. “Right here, or across the world, it doesn’t matter. We’ve learned his ideas are better than ours.”

“Crossroads has less than a dozen seniors, and no organized seniors’ ministry. However, all are active.”—Marvin Dyck, pastor, Crossroads MB Church, Winnipeg

When Jake and Elsie Bergen retired to Winnipeg in 1995, they immediately looked for ways to connect. “We tried something that had proven to be successful in other places: we placed an ad in the local newspaper offering our services for odd jobs, like cutting the grass or housework. It was very satisfying to share with people our reasons for serving,” says Jake. Until 1999, they served with Good Neighbours Active Living Centre, a non-profit that connects older adults with services and friends.

Now, Jake and Elsie participate in the prayer room of the Billy Graham telephone ministry, a care group, Sunday morning prayer times, and the church prayer chain. They make many personal visits, sharing the Bible and Elsie’s home-baked bread. In 2007, Jake received training through Hospice and Palliative Care Manitoba in preparation for visiting patients. “Afterwards they invited me to sign up as on official visitor, but I didn’t because they limited what I could say and ask.” Instead he became a volunteer chaplain/visitor for Mennonite Church Manitoba. “Here, I am free to discuss the Lord. I go weekly to Riverview Health Centre [a facility for rehabilitation, palliative, and long-term care], and to Concordia Hospital monthly.”

“Elsie makes friends very easily,” says Jake. “She can talk to anyone. God gave me a great gift when he gave me her. I have learned an awful lot from her. We live in a big apartment [block] where there are a lot of opportunities for us to make friends and it is important that we share our friendship.”

Recently retired from a nursing career in community health, Grace Klassen finds no lack of service opportunities with her freed-up schedule. “In the midst of trying to be faithful in the little things, God gave me the opportunity to do big things. I went to the DR Congo for two weeks last October as part of a medical resource team for a community medical clinic in Kinshasa.”

In May, Grace is taking on a new experience: teaching English as an Additional Language in Japan, covering the leave for full-time MB Mission worker Wendy Eros. She’s not expecting the three-month assignment to be easy, “but I’m not in this for ‘easy.’”

When not serving internationally, Grace is one of four mission mobilizers for her church and is regularly asked to mentor new members (“when a new believer is baptized, a mentor is assigned to them for one year,” she explains) and, in the past, young people on Ministry Quest.

Ruth Klassen is a long-term MB missionary/teacher who worked another seven years post-retirement for Family Life Network’s (FLN) Spanish ministry. She has co-facilitated a small group over the last couple of years, and serves as church librarian.

“Right now, I work on the refugee and immigration support team,” says Ruth. “[My sister] Grace and I are hosting a Colombian refugee couple over Easter for whom we have prayed a lot over the last year.” Ruth also translates for FLN, Spanish to English and English to Spanish, and travelled to Peru with an MB Mission prayer team.

Her health has slowed her down in recent years, but one activity doesn’t wear out her knees: “The Lord has given me a real heart for prayer.”

John and Helen Loewen sold their farm in 1992 and embarked on a two-year adventure to Hutchinson, Kan., with Mennonite Voluntary Service. John did repairs for poor and elderly homeowners through Interfaith Housing Services, and Helen created music as an activity aid at Mennonite Friendship Manor.

“The people there seldom responded to me, except when I had a little instrument,” says Helen. “Their eyes would light up. One time, as I was playing ‘The Battle Hymn of the Republic’ on the piano, one man – who I didn’t think responded to anything – suddenly sang out loud and clear, ‘Glory, Glory, Hallelujah!’ The nurses came running. Everyone was amazed.”

After those two years, they moved to Winnipeg. Helen worked an additional two years as a home care attendant and John started his own company repairing, renovating, and developing basements, working for himself until 2008.

When Helen felt the Holy Spirit’s nudge to begin her music ministry again, she called Riverview Health Centre. She now plays for an hour once a week. When she isn’t playing piano she knits mittens for Union Gospel Mission and works on quilt tops with John for Mennonite Central Committee (MCC).

“When renovations dried up, leaving me frustrated and unfulfilled, I asked God to show me what he wanted me to do,” says John. “God reminded me that my older brother had been involved in making blankets for MCC. So we went to the Kildonan Community Thrift Shop to get material and instructions.”

John irons the materials, then cuts and stitches the squares. “I am now at the point that I can sew the whole quilt top,” says John. “We do this in our own home, so if we tire of one thing we can go to another activity. It’s enjoyable to create beauty out of cast-offs, and we are not pressured to punch the clock.”

John has also has lent his carpentry skills to FLN. “I have been called back repeatedly. If it involves painting, Helen comes and helps. It is always a joy to work in such a positive environment.”

“Rudy is a very humble man who is always careful to give God the glory. He is a human example of how to love people as Christ loves them, even the very unlovable.” —Becky Leslie, Coaldale MB office administrator 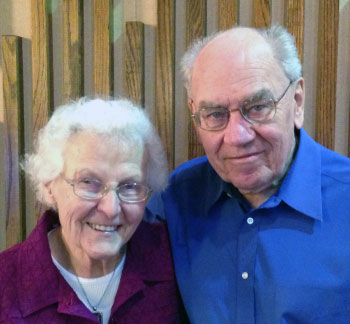 Before retirement, Rudy Heidebrecht served 23 years as full-time pastor of Coaldale (Alta.) MB Church and taught New Testament for 14 years at Bethany College, Hepburn, Sask. He retired in 1997, then went on to serve an additional three years as interim pastor at several MB churches experiencing transition before returning to Coaldale.

“Rudy is as busy with visitation as he always has been,” says Leslie, “both with believers and those who are not believers. He never gives up. And Mary has been right by his side, visiting, and caring for people, and is always Rudy’s biggest supporter.”

Although Rudy’s preaching opportunities are limited, he continues to teach adult Sunday school and maintains a full visitation schedule with Mary. They both sing with a group of 16 others called Chapel Singers, comprised of people from local evangelical churches.

The Chapel Singers rotate through senior centres, the jail (six to eight times a year), and long-term care facilities, singing twice every Monday evening at the given venue. “For the first service we move from section to section singing, and at the second service I present a devotional,” says Rudy.

“When I entered retirement, the long-term care unit invited me to bring in a Bible study,” says Rudy. “I’ve been doing this for 12 years now.” Once a week, he brings people from their rooms into the chapel to hear and participate in the study.

Leslie refers to Rudy as the “Billy Graham” of their community. “Many lives will never be the same because of how the Lord has used him to reach the unreachable.”