What's New
“I’m Sorry” : Pope Francis addresses a “deplorable...
A matter of love: Reframing abortion
“Any chance you might be expecting a goldfish?”
Abortion, the image of God, and faithful witness...
Choosing motherhood: The sacrifice of honouring life
MWC Assembly small but full of joy
Bad back doesn’t hold back MDS volunteer
Transition in CCMBC National Faith and Life Leadership
Leading through the trauma of covid: Part three...
The church distracted: When the main thing is...
Home Arts & Culture Shrinking to grow?

Renovation of the Church: What Happens When a Seeker Church Discovers Spiritual Formation
Kent Carlson and Mike Lueken 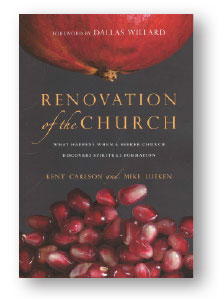 Anyone who has done home renovations knows it’s a messy, disruptive, time-consuming, and often costly process. But, done right, renovation can transform a space into something glorious. Authors Kent Carlson and Mike Lueken tip their hats to Christian thinker and writer Dallas Willard’s use of this metaphor (in Renovation of the Heart) and apply it to their own church in Renovation of the Church. These co-pastors tell the story of the spiritual renovation that occurred at Oaks Hills Church, Folsom, Cal.

But does embarking on renovation mean something is wrong? For the church, Carlson and Lueken say yes: “We believe that the church in North America is in serious trouble.” The culture in churches in North America has produced “a limited understanding of the gospel of the kingdom and an unhealthy focus on outward success.”

They take particular aim at the strategy that focused on attracting people, churched and nonchurched, to a given worshipping community. “This attractional model, we believe, is fundamentally flawed,” they write, “and will not be able to produce in any significant way the kind of Christ followers that the church leaders want to produce.”

Oak Hills, like many other churches in the 1990s, embraced this model. Over a few years, attendance grew from 200 to 1,700. But despite this external success, there was a growing unease, and fear of burnout on the part of staff and leaders. The large entrepreneurial, attractional-model church “requires constant feeding,” Carlson and Lueken write. “When we structure a church around attracting people to cutting-edge, entertaining, interesting, inspirational, and always-growing services and ministries, there is simply no room for letting up.”

During this time, these leaders began to read the work of contemplative Christian authors Richard Foster, Eugene Peterson, and Dallas Willard. The church leaders at Oak Hills “began to get some clarity on a troubling truth: that attracting people to church based on their consumer demands is in direct and irredeemable conflict with inviting people in Jesus’ words to lose their lives in order to find them.”

After a pivotal moment of decision, Carlson and Lueken began change how they had been doing things. They began to teach their congregation more explicitly about the things Jesus spoke most about: the good news of the kingdom of God, and being a disciple. They also taught against consumerism and its dangers for a disciple of Christ. Over time, what they taught in what had been the “seeker”-styled Sunday service was the same as what was being taught at their mid-week “believer” service. So, they cancelled the mid-week.

In making these adjustments, Carlson and Lueken found themselves challenging the very Christian consumer culture that they had helped foster. Not surprisingly, many of those consumers – their desires and preferences no longer catered to – decided to take their business elsewhere: some 1,000 people left Oak Hills Church. This is not book about how to grow a church bigger, but deeper!

The authors spend the rest of the book exploring some of the big themes they wrestled with in the process of making discipleship to Christ their central concern: confronting personal ambition as Christian leaders, rethinking the good news, discovering effective outreach, and learning about God-centred worship. They also write of the beginnings of a glorious transformation into Christlikeness in their own lives and in the lives of those in their church.

Overall this book (winner of Christianity Today’s 2012 book of the year award in pastoral leadership) speaks in prophetic tones against false gods to whom God’s people have made accommodation. Like the prophets of old, these authors speak plainly: “We have trained Christians to be demanding consumers, not disciples,” Carlson and Lueken write. They challenge church leaders to scale down services “for 3 months to just prayer and Scripture reading and watch what happens.”

The authors write in an open and honest way about the joys and frustration of leading their church. At times, I felt like I was eaves-dropping on a heart-to-heart conversation between two pastors. I would highly recommend Renovation of the Church to all church leaders, but it would be a mistake to think it’s only for pastors; as a layperson, I gained renewed appreciation for church leaders difficult and sometimes thankless work. As well, I was challenged to examine where I have adopted the mindset of a consumer in my approach to church.

The middle of the book seemed to meander into topics more of interest to church staff (e.g. a chapter on the pros and cons of the co-pastor team), which I found less compelling. In addition, the book fails to address some areas of church life and discipleship. Like many megachurches, Oak Hills appears to be a stand-alone enterprise with a top-down approach to church governance. There is no mention the role of a larger denominational commitment in their journey. There is no consideration of alternative forms of leadership.

The historic MB pattern of congregational governance within a denominational structure may be one of the very things that could help mitigate against the passive consumerism and personal ambition the authors struggle against. On the other hand, as an MB, it’s heartening to see evangelicals rediscovering the New Testament emphasis on discipleship our Anabaptist forebearers had 500 years earlier. These Christians seem to be wrestling anew with how to relate to a nominally religious culture that is opposed on many levels to the life and teachings of Christ.

As a people who are both evangelical and Anabaptist, Mennonite Brethren are in a unique historical position to affirm this rediscovery. There is much we can add the conversation. There is much we can learn from as well. We too (young and old alike) have not been immune from our consumerist culture’s expectations to have our tastes and preferences catered to in our churches. Could we instead learn to let go of seeking our own way at church? Could we allow Christ to use the things that are difficult in church to make us more like him?

—Mark Friesen is a member at The Meeting Place (MB church), Winnipeg.

Is size the problem?