What's New
“Any chance you might be expecting a goldfish?”
Abortion, the image of God, and faithful witness...
Choosing motherhood: The sacrifice of honouring life
MWC Assembly small but full of joy
Bad back doesn’t hold back MDS volunteer
Transition in CCMBC National Faith and Life Leadership
Leading through the trauma of covid: Part three...
The church distracted: When the main thing is...
Remote wilderness rescue turns into service with MDS...
How open is your mind?
Home Arts & Culture Wresting sin theology from Augustine 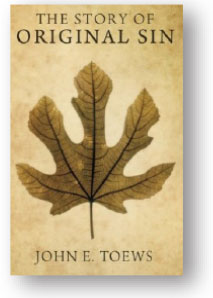 “Here we go again,” I thought when I saw the title, The story of original sin. “Another book trying to change a basic Christian doctrine and water down our concept of sin to make faith more palatable to a postmodern audience.”

However, I was pleasantly surprised. In contrast to my expectations, author John E. Toews (dean and professor emeritus of Fresno Pacific Biblical Seminary) argues for a more biblical understanding of sin consistent with the most ancient Judaic and Christian writers: “The doctrine of original sin as articulated by Augustine and then propagated in the history of Christian dogma is without biblical and theological foundation or merit.”

This bold conclusion differs from the view of sin (Augustinian) Toews was taught as a young student. “I was sinful by nature apart from any choice or action of my choosing,” he writes. “Sin defined my being from the moment of conception. There was nothing I could do about it because my nature, my being had been corrupted by Adam’s sin in the Garden.” The short book (144 pages) explains how Toews came to shift his perspective.

Starting with Genesis 3’s narrative of Adam and Eve’s transgression in the Garden of Eden, Toews explores what the text says – and points out what it does not say: that all humanity shares in Adam’s sin or that human nature was now completely corrupted by Adam’s sin. He then reviews in detail what biblical and other early Judeo-Christian writers (pre-Augustinian) say about Adam and Eve in the Garden of Eden and the nature of sin.

His findings can be summarized as below:

1) Genesis 3 is not a major reference point for many early authors. In fact, Old Testament writers and the apostolic fathers (Christian leaders in the generation after the apostles) make no reference to Genesis 3.

2) When non-canonical Judeo-Christian writers reference Genesis 3, there is quite a range of interpretation – none of which include the idea of original sin.

3) Biblical and early Christian writings emphasize personal accountability for sin and human free will (e.g. “This day I call the heavens and the earth as witnesses against you that I have set before you life and death, blessings and curses. Now choose life, so that you and your children may live,” Deuteronomy 30:19).

But at the heart of Toews’ argument is Paul’s writings in Romans 5:12–19, the key passage Augustine uses as the biblical basis for the concept of original sin. Toews especially takes issue with Augustine’s interpretation of verse 12: “Therefore, just as sin entered the world through one man, and death through sin, and in this way death came to all man, because all sinned…” Toews says Augustine’s use of this text is faulty because he was using a faulty Latin translation which rendered the last phrase “because all sinned” as “in whom all sinned.” Augustine used this Latin translation to argue that all humanity was “in Adam” at the moment of his transgression and hence all humanity is culpable for Adam’s sin.

Instead, Toews argues, the original Greek translation reading “because all sinned” suggests that all humans die because each human commits his or her own sin. He also argues that much of the concept of original sin is based in Stoic philosophy, especially the theory of the soul referred to as traducianism (a belief that an individual’s soul is made from the soul of that person’s father). This sets the stage for the understanding that all humanity was in Adam when he sinned.

Beyond merely deconstructing original sin, however, Toews points to a biblical theology of sin as “a willful mistrust of God, rebellion against God, breach of relationship with fellow human beings. Sin was understood in relational terms.”

Toews also points to the faithful followers of Scripture who hold to a non-Augustinian view of sin, including traditions that pre-date Augustine (Judaism and Eastern Orthodox) and the Protestant group most willing to overturn church tradition in pursuit of faithfulness to Scripture (Anabaptists).

Overall I was impressed with Toews’s overview of this important topic. Did he succeed in convincing me that original sin is “without biblical and theological foundation or merit”? I wouldn’t go quite that far.

There are a number of key points in the book where Toews glosses over details that deserved a more thorough explanation. For example, he acknowledges that Augustine bases his belief in original sin on five texts (Job 24:4–5; Psalm 51:5; John 3:5; Ephesians 2:5; Romans 5) yet Toews quickly dismisses four of them to focuses exclusively on Romans 5.

He also claims – without sufficient background – that the only reason Augustine’s ideas were not declared heretical (like Pelagius’s teaching) is that Augustine was a “strategic politician who knew how to use the power structures…[of Roman church and state]…to serve his theological and ecclesiological purposes.”

These important issues deserve more than a passing reference. However, I did come away from this book convinced that one can be a biblical follower of Jesus Christ and hold to a robust theology of sin without believing in Augustinian original sin.

Toews has done us a service by reminding us to go back to the texts of Scripture (and, to a lesser extent, early church writings) to form our theology over and above any later developments of church history, no matter how firmly entrenched. Our own Anabaptist forefathers testify to these truths. Original sin was only one of a number of points including infant baptism, just war theory and the use of state force against heretics where they disagreed with Augustine.

Mark Friesen is a member at The Meeting Place, Winnipeg.

I just want to say that I found John E. Toews’ book, The Story of Original Sin, a great read. As a matter of fact I wrote a series of four 1000-word essays and posted them on our local site here in Steinbach, Manitoba. I would be interested in John’s response to the essays. Did I hear him right? Could the essays be used in any way to promote the book. I think it is a wonderful book that more people should read. I tried to capture the heart of the book in 4000 words. You can find the essays at http://www.mysteinbach.ca/blogs/7170.html. I could also send copies by email if you wish.