What's New
Through the conflict, life carries on in Ukraine
A FOCUS on Mission
Must Patience Be So Slow?
Harold Jantz: A Heart for the Mennonite Story
Lorlie Barkman: A Life of Creative Engagement
Last Days, First Days
Women in Ministry: Bertha Dyck
January Moment in Prayer “Holy Spirit—Fill Us!”
The Church as the Patient Body of Christ
Advent: Making Much of Jesus: Christmas Day
Home Arts & Culture Tools for reconciliation

Race & Place: How Urban Geography Shapes the Journey to Reconciliation 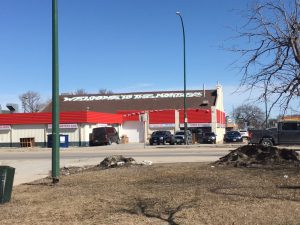 After crossing a large bridge over a rail yard, this is the welcome one receives entering into the North End of Winnipeg. PHOTO Cherie Bright

Leong shares a Christian vision of racial reconciliation that explores and works within the dimensions and heritage of urban geography. He calls the church to dig into the political, historical, and geographical roots of racial injustice so that neighbourhoods can be reimagined to cultivate human flourishing rather than strife.

Race & Place gives tools for reconciliation that begins with local listening and leads to collaborative action and parish well-being.

David P. Leong is associate professor of missiology at Seattle Pacific University and Seminary. He speaks from the local issues of his own community and experiences to challenge those in every community to find the roots of racial injustice.

Working with First Nations communities in the North End of Winnipeg has shown me that racism is a deep-seated issue that is far bigger than the flawed ideas of individuals. Daily, I see how geography and the perception of a neighbourhood creates and perpetuates injustice and poverty right in Winnipeg.

The MB Confession of Faith talks of the value of human beings and the fact that the church is made up of every nation, race, and class, calling believers to co-operate with others to promote justice and righteousness and care for the poor and weak.

However, the language of our Confession of Faith almost gives permission for passivity (it only calls us to join others). Leong’s book, on the other hand, calls believers to actively and creatively break down barriers and systems of injustice. Race and Place reflects God’s call to seek justice and serves as an apt correction to a lived peacemaking theology that can tend toward complacency.

The gentrification of cities is simply the retelling of colonial history. Land is taken from the uncivilized who do not “own” it to create even more wealth for the white elite.

This book is extremely U.S.-oriented, especially in its language of black and white inequality. Nevertheless, if readers get past the specific examples, the principles transcend localities and reveal the deeply rooted issues in their own communities.

As a Canadian, I find that exchanging the word “Black” for “Indigenous” in my own mind makes nearly everything I read relevant in my own community and country.

“Christian belonging insists we can and should transgress the boundaries that divide us.”

“Before we begin the fixing, perhaps it would be helpful to really consider the ugliness and brutality of the walls we’ve constructed and our own complicity in building and sustaining these walls.”

“I still long for that possibility — for places thick with rooted communities and parishes that disrupt the fear and racial logic of the ghetto with creativity and incarnational imagination.”

Give the mercy seat a try