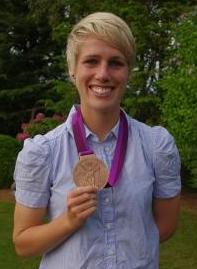 For serious athletes, life has many ironies. To succeed – say, at the Olympic level – you must play your sport constantly, doggedly following the seasons around the world, never resting. You can rarely be home where folks cheer you on and want to welcome you back.

It’s like that for Sophie Schmidt of Abbotsford, B.C., a midfielder for Canada’s bronze-medal-winning Olympic women’s soccer team. King Road MB Church friends support her and root for her while she travels the globe, yet she doesn’t often get back to B.C.

Kicking off some scarce downtime prior to her planned departure to play soccer in Germany in the off-season, Schmidt received a warm hometown reception from fans, friends, and family in Abbotsford, Aug. 18–19. Some 150 well-wishers gathered on Saturday night to pay tribute to her London 2012 achievements – which include two assists in addition to the bronze medal. 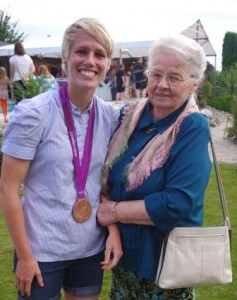 Retired missionary and King Road prayer warrior Anna Jantz, 85, has no TV. Each day during the Olympics, she would phone Cornelia Schmidt, Sophie’s mother, to ask what time Sophie’s game would be played – then set her alarm clock for the early morning to pray.

On Sunday, the congregation at King Road MB (where she grew up) honoured Schmidt during its worship service. She had a chance to personally thank the people of her home church for their prayers and love.

Though she’s away from King Road more than she is present, “I may not remember all the names, but it certainly is my church. My best friend is still here – and others, too.”

Saturday evening was Schmidt’s night. She posed for pictures. She autographed untold numbers of local soccer team shirts and soccer balls. She was gracious, available, and humble – a true star.

She referred to the now-infamous Olympic semifinal game with the U.S.A., in which controversial refereeing calls affected Canada’s aspirations for a gold medal. It was a hard night, Schmidt said. “But Canada picked us up. There were so many messages of support and love.”

Speaking privately, she says simply, “I try not to dwell too much on the things I can’t control. I try to play as hard as can. I’m grateful to God that I have gifts in soccer. I try to play to the best of my ability. If  I’ve left everything I can on that field, I have peace.” 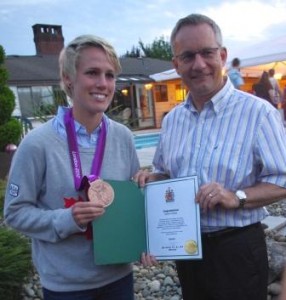 Member of Parliament and international trade minister Ed Fast (right) said the community is celebrating Team Canada’s women’s soccer victory. “We all know that inside that bronze medal is gold,” he told Schmidt. “Like your heart.”

The year 2012 marked Schmidt’s second Olympics. Her first occurred in 2008 in Beijing, when she was 20 and still in university. She graduated from the University of Portland, and had planned to go on to study nursing, but decided a medical career must wait.

Right now, Schmidt’s focus is on her passion – soccer. Veterans tell her to play while she can; later, she can study and coach. Most players peak at 25 or 26, she says. She’s now 24 and looking forward to the 2014 World Cup and the 2016 Olympics.

“My faith is a big part of my life,” Schmidt says. But it’s often difficult in such a competitive world. With so much moving around, she says, “it’s sometimes hard to keep Christ-centred. But I try to live his love. I make a conscious effort to live a Christian life.” She adds, “There is so much support at home for me, and so much prayer. I appreciate it!” 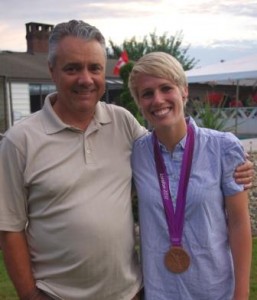 Coach Bill Broadfoot said he worked his Metro Rep team hard (reaching provincials twice and nationals once). Many of the teenaged girls would grumble at the pace, but Schmidt just grinned, he said. “She led by example.”

There were “Sophie” stories told at the celebration. When Schmidt was just a girl, and her team was practicing shots on the goalie, she sizzled one in. The keeper took off her gloves, rubbed her smarting hands, and said, “That’s it; I’m never going to get in front of her again!”

Another story from Bill Broadfoot, who coached Schmidt on a Metro Rep team for five years: Schmidt disliked heading the soccer ball, so he promised her $5 for every goal she headed in. He says she applied herself, as usual, and just about drained his bank account in the process. Next season, he withdrew the offer.

“Many people have talent,” Broadfoot said. “But Sophie has both talent and focus. Few people have focus like Sophie.” 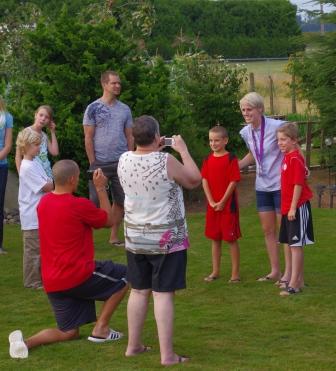 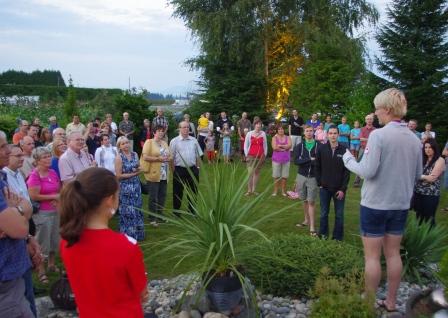 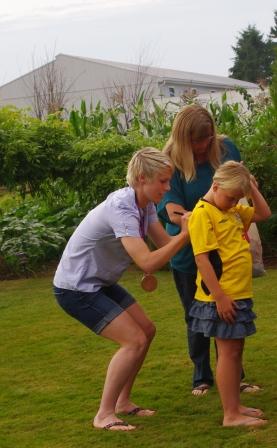 Schmidt autographed countless soccer jerseys, soccer balls, and just about anything you could write on.
King RoadsoccerSophie Schmidt
0 comment