What's New
Through the conflict, life carries on in Ukraine
A FOCUS on Mission
Must Patience Be So Slow?
Harold Jantz: A Heart for the Mennonite Story
Lorlie Barkman: A Life of Creative Engagement
Last Days, First Days
Women in Ministry: Bertha Dyck
January Moment in Prayer “Holy Spirit—Fill Us!”
The Church as the Patient Body of Christ
Advent: Making Much of Jesus: Christmas Day
Home News MCC Canada AGM delegates gather under the “big tent”

Diverse Anabaptists called to work together to address global needs 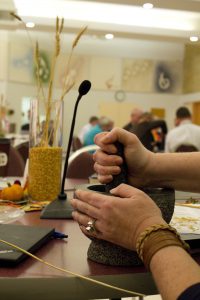 The staff and delegates who make up Mennonite Central Committee (MCC) Canada’s constituent boards gathered at Bethel Mennonite Church in Winnipeg from September 23 to 24, 2016, for the MCC Canada annual general meeting.

For many supporting denominations, MCC is like a big tent, MCC Canada executive director Don Peters said. “It’s the place where the Anabaptist community works and serves together.”

However, the question on many people’s minds has been can we stay under the tent together? The board decided to use its yearly forum time to facilitate a conversation around the issue.

In this metaphorical tent there are many people with different backgrounds, gifts, challenges and perspectives.

MCC was formed 96 years ago as a cautious contract born of necessity between these divergent, sometimes conflicting groups to help Ukrainian Mennonites caught in the aftermath of the First World War and in the midst of post-revolutionary Russia.

“The magnitude of the suffering and the urgent need for action compelled the groups to collaborate,” Peters quoted from Mennonite Central Committee in Canada: A History by Esther Epp-Tiessen.

In this way, these churches who make up MCC were and are like a stalk of wheat, Mary Anne and Jon Isaak said during a worship session, as they asked participants to strip kernels of wheat from the stalk, grind them in a mortar and pestle and contribute the flour to other ingredients to make bread. Mary Anne is pastor of River East Mennonite Brethren Church in Winnipeg and Jon is director of the Centre for Mennonite Brethren Studies.

“If we’re separate from each other, we do not serve our purpose to nourish and sustain one another,” Mary Anne said. MCC is one body, but a body of diversity, she added, referencing Romans 14 which participants used as the basis for a Bible study on the Friday.

Although MCC has historically been an organization around which different groups have come together to nourish and sustain others, both the church and MCC are experiencing shifts due to ideological and theological conflicts which threaten both institutions in their present form. 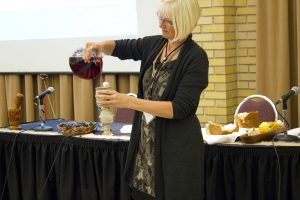 Peters cited MCC’s participation in interfaith dialogue, its work in Palestine and Israel, and the ongoing conversation surrounding inclusion in the church of members who are in committed same-sex relationships as issues which “have the potential to fracture the Anabaptist body in Canada and, potentially, to erode support for MCC,” Peters said.

In the midst of these shifts, suffering persists globally and there continues to be an urgent need for MCC’s relief, development and peace work.

“The reasons for MCC’s coming together still apply today,” Peters said, calling on leaders and members of these groups to put aside their differences for the greater good of humanity.

“We want a commitment (from constituent churches) that the needs out there are so great, they compel us to work together to address them,” he added.

During this meeting, participants discussed MCC’s work worldwide, its collaboration with church groups, and the challenges associated.

In the afternoon, participants broke into discussion groups to uncover the relevant past lessons from such challenges as the 1979 Southeast Asian refugee crisis and the current conflict in Syria and Iraq.

Pam Peters Pries, MCC Canada’s associate program director reported back on her group’s discussion about how these disasters appeal to one’s humanity, regardless of religious views.

“There’s been a tremendous response from a diverse group of people,” she said.

But MCC Canada board chair Peggy Snyder expressed worry people with differences sometimes don’t come together until there is a crisis, rather than addressing problems before they escalate.

“How do we address the situation before it becomes a crisis? How do we come together around some of that?” she asked.

At the close of the day, participants were invited to share a message either for MCC or the church regarding “big tent thinking.”

Several participants shared messages to the churches that make up MCC’s constituent base to embrace the diversity within. “We can work together with differences and our diversity can help us see things we wouldn’t see,” MCC Alberta board member Kris Peters said.

Other participants called on the churches to persevere in their work with MCC and to recognize MCC is not meant to be a faith leader, nor to mediate issues of theology, but to continue to carry out its relief, development and peace work.

Coming together to sustain MCC’s work can mean the difference between life and death, peace and violence, justice and injustice. MCC’s work around the world runs the gamut from relief assistance for Syrian refugees, to camps which promote peace in Zambia, to food security projects in Nepal, to advocacy work in Canada and the United States.

MCC hopes its church owners will continue to walk alongside one another as we continue our relief, development and peace work in the name of Christ.

—Rachel Bergen is a staff writer for MCC Canada.