When he first accepted Christ as a teenager in Hong Kong, Joseph Kwan had no inkling he’d end up in Canada as editor of a Chinese-language Christian magazine. 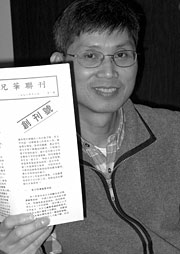 Canada’s MB Chinese Herald celebrated its 15th anniversary last December. For about half that time, the magazine has thrived and grown under Kwan’s editorship.

Funded by the Canadian conference, the publication was launched by the Chinese MB churches in Greater Vancouver, and supervised by the MB Chinese Churches Association (MBCCA). The MB Chinese Herald now serves 21 Chinese congregations across Canada, and two Chinese church plants in Venezuela.

Kwan is the journalistic “one man band” – reporter, editor, photographer, graphic designer, typist and proofreader – all in one. He is intentional about linking Chinese speaking MB churches to each other and to the Canadian MB conference.

He sees a gap between the Chinese speaking congregations and conference. “A sense of belonging was just not there,” he says, “but year by year, I see it improving.” He finds satisfaction in connecting the communities.

Kwan is also passionate about reflecting changes in Canada’s MB Chinese communities. He says that since 1997, the number of Hong Kong immigrants to Canada has dwindled to a couple thousand per year, but the number of Mandarin speaking mainland Chinese immigrants has soared – up to 10,000 per year in B.C. alone. Most Chinese MB congregations, once Cantonese speaking only, now have Mandarin speaking groups.

By training, Kwan is a teacher. He never expected to be an editor or computer programmer (his “day job”), let alone an integral part of a Mennonite Brethren community. He had come to Christ in Hong Kong as a Chinese Free Methodist. But today, he and his wife Susan are happily settled in Pacific Grace MB Church in Vancouver.

While Kwan was waiting to hear about his application to edit the Chinese Herald, a neighbour pressed him to sign on full-time as a computer programmer. He was tempted to say yes, but concluded, “I promised to be editor, and I must keep my promise.” The neighbour instead offered him three days a week, and Kwan was finally approved as editor – a two-day-a-week position.

A typical Chinese Herald bi-monthly issue contains stories, Bible studies, news of national and worldwide Christian communities, and submitted stories and thoughts from pastors and general readers. The magazine also includes baptism announcements and other elements of church life. It serves, indeed, as a link.

But maintaining the community is quite a challenge. The Chinese Herald’s readers know Cantonese or Mandarin. Sometimes, between the two dialects, a written character will appear to be the same, but word meaning can vary greatly. “Lost in translation” says it! Such is the life of an editor of a Chinese-language magazine in Canada.

No “in crowd” at neighborhood church