What's New
Multiply September Ukraine Updates
Volunteers in B.C. honour Leamington woman tragically killed...
Delete or not to delete, that is the...
Believers bring water for drought baptism
Encouragement to those in the arena
Keeping attention and making an impact: A few...
Open hands to reconciliation
From the editor
Approaching truth and reconciliation with love in our...
MB Seminary offers new MA in Transformational Leadership...
Home Arts & Culture Long-awaited commentary doesn’t disappoint 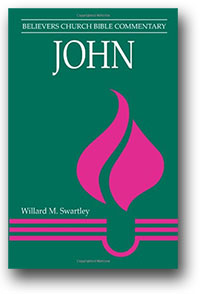 The wait is over. Herald Press has finally published a commentary on the Gospel of John in the Believers Church Bible Commentary series. Those patiently waiting will not be disappointed. Willard Swartley, professor emeritus at Anabaptist Mennonite Biblical Seminary in Elkhart, Ind., where he taught from 1978 until his retirement in 2004, has done a masterful job combining diligent research, engaging exegetical insights, and a well-developed writing style.

At 592 pages, Swartley’s commentary finds itself in good company with other mid-sized commentary works on John. After a very brief introduction (43 pages), the commentary is divided into five main sections: the prologue, the three Passover feasts, and essays on various subjects pertinent to John’s Gospel.

John’s Gospel is a place where a child can wade and an elephant can swim. It’s so markedly different from Matthew, Mark, and Luke that readers who come with the same presuppositions and interpretative principles for the synoptic Gospels are often so disappointed that they miss much of John’s rich theology and unique contribution to Gospel literature.

For example, students are always surprised that John’s Gospel contains no exorcisms, wilderness temptation narrative, garden agony, or transfiguration scene. Parables and short pithy statements characteristic of the synoptic writers are replaced by long discourses and controversies. It also comes as quite a shock that the central focus of the upper room narrative in chapter 13 centres around footwashing rather than the Lord’s Supper.

Always faithful to his Anabaptist tradition, Swartley holds up the lens of God’s love and his mission, through which he calls us to read the text. To that end, it’s impossible to read this commentary as a passive learner.

Make no mistake, there’s an urgency in Swartley’s commentary that manifests itself in a greater love for God, the church, and humanity. For example, Swartley walks the reader through the garden arrest with incisive insight into Peter’s aggressive act as he violently moved against the servant of the high priest. One comes away from this and other passages with a renewed sense of conviction toward a peace theology.

Swartley moves the believer away from the all-too-present reality of the unexamined life, and throughout the commentary brings the reader face-to-face with the fact that we cannot remain neutral on the issues John’s Gospel addresses.

Swartley’s commentary is a valuable biblical resource for a wide range of readership. Those interested in deeper, inductive Bible study will gain much insight into John’s style and message without being overwhelmed by Greek text and constant referencing to footnotes. College and seminary students will find his commentary engaging and thought-provoking.

Duality, not dualism focuses on Christ

For example, in one of the essays at the end of commentary, Swartley argues, quite persuasively, that John’s Gospel should not be thought of as working with the literary feature of dualism but with duality. By approaching John through the lens of dualism, the couplets – light and darkness, truth and error – are seen as polarities, but this breaks down when couplets like flesh and spirit are added. John’s Gospel is eminently incarnational and so the phrase, “the word became flesh” should not be taken as a negative (which would be the case when viewing John through the lens of dualism). By seeing the duality of John’s writing, each couplet may be assessed on its own merit. In this way, Christology then becomes the central focus of the Gospel.

Swartley has been student, pastor, and teacher, and this is reflected in his commentary both in style and content. He earned a PhD from Princeton Theological Seminary in 1973 and pastored Locust Grove Mennonite Church in Elkhart. In addition to his teaching responsibilities, Swartley has authored several books and edited over 30. One of his better known publications is Slavery, Sabbath, War, and Women published in 1983 by Herald Press and more recently Health, Healing, and the Church’s Mission published in 2012 by InterVarsity Press.

Willard Swartley’s commentary on John’s Gospel is an engaging and thoroughly enjoyable read. Scholarly but never pedantic, it leaves the reader with a renewed sense of the mission of God and a deeper devotion to Christ. It’s a must-read for everyone interested in studying the Gospel.

Presence in a broken world

With these rocks we will build our church