What's New
6 reasons to attend the MWC Global Assembly...
One too many
Just one more
A safe place in Winnipleg
When the sent are sent away
Leading through the trauma of covid: part one...
Church of Lithuania supports Ukraine Christians
A mennonite heart for refugees
A great time for building relationships
Multiply announces new General Director
Home Life & FaithBible study The little boy who went all in: A story of whole-hearted worship

The little boy who went all in: A story of whole-hearted worship

The other night, I asked two smart little boys if they could recall a story from the Bible where a child did a beautiful thing for Jesus. Their eyes lit up as they remembered the little boy who gave his entire lunch to Jesus – five loaves of bread and two small fish – to feed more than 5,000 people.

We imagined something similar happening today. We pictured a hockey arena full of thousands of people and one child with a couple of hot dogs. A storm comes, everyone’s trapped in the arena, and the vendors are all broken down. People have been stuck for hours and everyone’s hungry. And you’re the one with two hot dogs! Could you go all in, not knowing if you’d get anything yourself?

Read the original story from John 6 and put yourself in the narrative. What would you have done?

There are many details I love about this Bible story. I love that it was a child who brought a lunch when he went to hear Jesus speak. The little guy was clearly the responsible one, not his mother – because no mother packs that kind of carbs-to-protein ratio, and with no veggies either!

I love that it was a child because often, as adults, we grow out of faith. When we see obstacles, we think: “Impossible!” That’s exactly how Philip and Andrew responded.

But with the faith of a child, the boy simply wanted to be faithful to Jesus and give all he had. He went all in and did a beautiful thing. I’m sure he was hungry himself, yet gave up his entire lunch. And remember, he didn’t read this Bible story ahead of time. He was living it. He didn’t know what Jesus was going to do, or that there would be 12 baskets of bread left over.

Have you brought your five loaves and two fish to Jesus? Have you allowed Christ to multiply those things in your life? When we bring our simple resources to Jesus and they pass through the hands of our Creator, they become enough – more than enough – and God transforms them into an abundance of blessing. When we bring our little selves to Christ, it’s absolutely miraculous what he can do through us!

But we don’t give to God in order to receive. We may give God everything we have, and find we’re left with nothing.

Does that mean God isn’t good? No. His greater plan is beyond what we can imagine. We give to God because he is God. He is holy and we are not. When we worship him, it’s an honour. Regardless of the outcome – whether we end up with plenty, or in need – we’re doing a beautiful thing for Jesus.

What are some beautiful things we can do for Jesus? Is there anything we’re not willing to hand over to him? What’s holding us back from surrendering ourselves and our gifts to God?

God worked a miracle through the gift of one little boy’s faith. May God reveal more of himself to us because of our willingness to go all in. 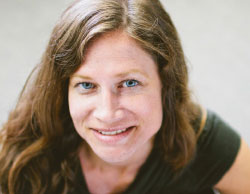 When Jesus looked up and saw a great crowd coming toward him, he said to Philip, “Where shall we buy bread for these people to eat?” He asked this only to test him, for he already had in mind what he was going to do. Philip answered him, “It would take more than half a year’s wages to buy enough bread for each one to have a bite!” Another of his disciples, Andrew, Simon Peter’s brother, spoke up, “Here is a boy with five small barley loaves and two small fish, but how far will they go among so many?”

Jesus said, “Have the people sit down.” There was plenty of grass in that place, and they sat down (about five thousand men were there). Jesus then took the loaves, gave thanks, and distributed to those who were seated as much as they wanted. He did the same with the fish. When they had all had enough to eat, he said to his disciples, “Gather the pieces that are left over. Let nothing be wasted.” So they gathered them and filled 12 baskets with the pieces of the five barley loaves left over by those who had eaten.

What’s so dangerous about youth sports?

Ready for the end