Investing in Lesotho, one farmer at a time 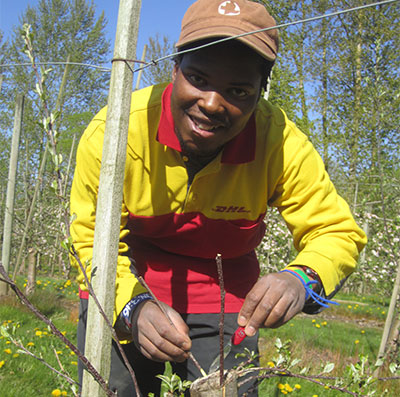 Rorisang “Rori” Moliko works hard helping to plant more than 50 varieties of pumpkins in the greenhouse at Willow View Farms in Abbotsford, B.C. Although pumpkins are a common crop in Lesotho where Rori comes from, corn is what most farmers grow. But Rori is learning new things at Willow View and dreaming about what he will do when he returns home after his year in Canada.

“I am learning so many skills,” he says. “I want to do more – I am encouraged to be a farmer.”

Rori is a participant with Mennonite Central Committee’s (MCC) International Volunteer Exchange Program. IVEP is a vocational and cultural exchange program for young adults aged 18–30. People from 30 countries around the world come to North America for one year to live and learn. Participants are billeted with families and gain vocational skills through a volunteer work placement.

For Rori, that placement is at Willow View Farms, a small scale fruit/vegetable farm owned by Murray and Cheryl Siemens who attend South Abbotsford MB Church.

Willow View Farms has been family owned and operated since 1960. The Siemens’ have been farming here since 1991 and have grown their business to include agritourism and direct farm sales. Murray, who has a degree in geography, loves farming but he also loves sharing his knowledge, so when the opportunity came to take on an IVEPer, he was very excited.

“I really wanted to do this. I can’t go somewhere to teach farming practices because I’d have to leave my own farm but to have IVEPers come to me is ideal,” he says. “A lot of what we do here is small-scale farming – some marketing as well – all skills that are transferable to Lesotho.”

Back home in Lesotho, Rori was already involved in farming, working for an organization focused on conservation agriculture called Growing Nations. Here in Abbotsford, Rori has learned new skills, everything from planting to grafting and pruning, tractor driving to juice making. He’s considering introducing new crops into the market when he has his own farm. Farming back home is seen as a lesser job where desk jobs and computer work seems to have more prestige. But working the land is all he wants to do, even though there will be some challenges getting established. 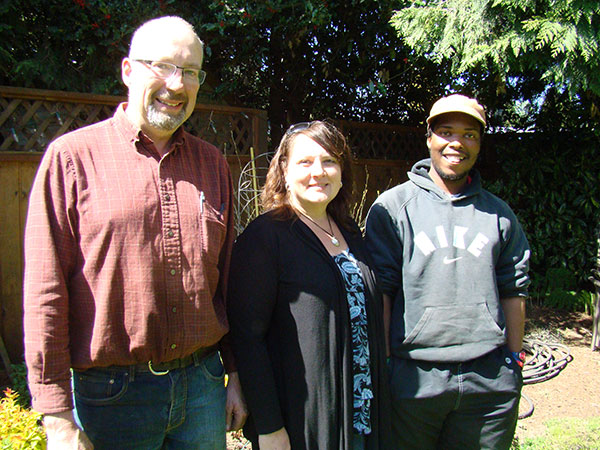 Murray and Cheryl Siemens say that their lives have been enriched by IVEPer Rorisang Moliko who comes from Lesotho and is spending this year learning new farming techniques at Siemens’ Willow View Farms.
MCC Photo: Angelika Dawson

“My mom says you need patience to succeed. I had to work hard to earn money to come here, but I’ve learned so much – it has been worth it,” he says.

Cheryl says that while she was hesitant at first, the experience of having an IVEPer has been a rich one. Rori is their second IVEP participant; their first one was also from Lesotho.

“The last two years have made me so grateful,” she says. “It has totally enriched our lives. I have two daughters, now I have two sons!”

Murray and Cheryl don’t know if they’ll ever get to Lesotho (though the thought is tempting); however, they know their investment in farmers here is making an impact there.

“There’s tremendous opportunity to grow more than one crop in Lesotho, which means the community can purchase those crops locally, the money stays in the community, and ultimately the community is strengthened,” Murray says, adding that there’s strength in numbers. “If there’s more than one person doing it, then there’s hope that others will be encouraged and see that there are opportunities in agriculture, to make a living on the land.”

Murray knows the biggest challenge for Rori when he goes home will be collecting the capital needed to purchase land.

“If we just train people here, but they have no resources when they return, they’ll get discouraged,” he says. He hopes that the next step will be to find a way to help farmers like Rori to get a start.

In the meantime, Rori knows he’ll have to work hard to earn enough money to purchase his own farm, but he’s not afraid of hard work. He’s also encouraged that he’s already making a difference in his community.

“My friends look to me as a leader now,” he says. “I think they will have even more respect for me (when I return) because I am thinking in a different way.”