What's New
Tibetans in the Neighbourhood
MCC BC and MDS Flood Response and Partnership
Resilient Leadership: Praying against burnout
Boldly advancing the gospel from our knees
MCC sends food and relief to Cubans in...
Robert Dagenais, pastor of the Sainte-Thérèse church, is...
More donated hay needed to help farmers in...
“God’s time was perfect”
Hope and pray every day
Resilient Leadership: The gift of self care
Home News A golden opportunity 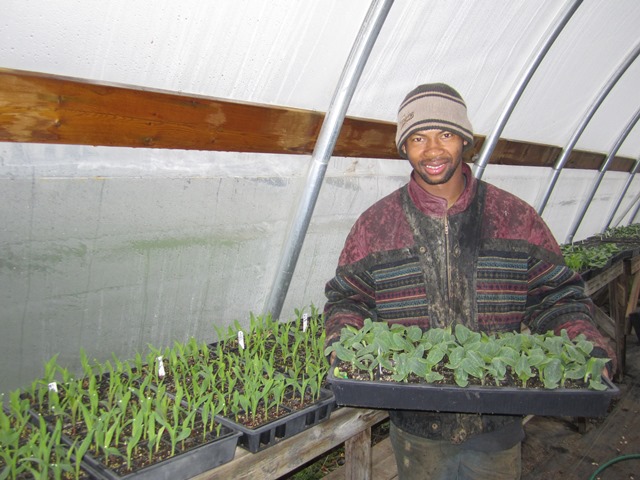 “I have never seen someone change [so quickly] from one day until the next day. After that, Thabang worked harder, he worked faster…. He realized, I think, that he had an opportunity here in Canada to learn skills, to learn knowledge, and that then he could take things back home…. It was like he was on a mission after that point. It was unbelievable change.”—Murray Siemens, Willow View Farms

Thabang Mpokathe was not supposed to make it into MCC’s International Volunteer Exchange Program (IVEP). The third applicant from Lesotho (a country only granted two), he was missing an important reference, and he lacked confidence.

However, when an applicant from another country dropped out, the 2011–2012 vacancy was awarded to Lesotho. Elmer Stobbe, an MB from Abbotsford, B.C., teaching agriculture to Mpokathe’s cohort in Lesotho, wrote the necessary reference, and abruptly, almost inexplicably, Mpokathe’s life turned in a new direction.

“Happiness, confusion, and excitement came along,” writes Mpokathe in his end-year reflection. “I thought if this could happen, it would be more than a dream come true to be in [North] America.” Yet, he worried he would underachieve.

Thanks to Stobbe’s urgings, IVEP placed him at Abbotsford’s Willow View Farms, a small, family-owned operation engaging in farm-direct commerce and agritourism. It was the first time the Siemens family had been involved in the IVEP program, and it took some getting used to. 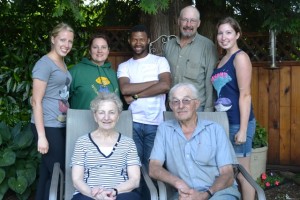 Thabang with the Siemens family, his employment sponsors.

“At first we said, ‘No, we’re too busy,’” Murray Siemens says, explaining that Stobbe called him from Lesotho (the first of several calls). “‘We’re interested in helping people, and we’re interested in development, but we’re full-time year-round here on our farm.” Eventually Stobbe prevailed, and fellow South Abbotsford MB Church member Lois Veer agreed to be a host mother. Unfortunately, Mpokathe’s trip was delayed by visa complications, and for the first few weeks after his arrival, Stobbe was in Winnipeg.

A stranger in a strange land, Mpokathe struggled to fit in with the community beyond his fellow IVEP participants, and bolster his low self-esteem. He spent his allotted $100 per month on movies and eating out with other IVEPers, staying out so late he could barely keep awake at work the next day.

“I wasn’t meeting the expectations at all; I couldn’t fit in all the day-by-day job description,” Mpokathe remembers. “I was frustrated and felt worthless. God, please come to my rescue [I said]. I needed to come home, but I didn’t know how to tell my coordinator…. I thought [I was a] disappointment to me, my family, my community, and my country.”

It wasn’t until three weeks after Stobbe’s return that Mpokathe finally found time to speak with him, and they talked for hours about Mpokathe’s frustrations and lack of vision.

“I said to him, ‘Thabang, this is your golden opportunity to change your life forever,’” says Stobbe. “You have a chance now of developing into something that you want to be. But you have to be active at it, and Number One, you have to start taking responsibility of the [stipend] because the money that you’re earning is going to help you when you go home.”

Mpokathe was inspired. He wanted to speak to Siemens immediately, but Stobbe convinced him to wait until the following morning.

“Thabang came to me and said, ‘I realize I haven’t been meeting your expectations; I haven’t been working hard enough or showing initiative. I’m hoping we can change our relationship,’” says Siemens. “I think it took a lot for him to come and talk to me about that.”

Both Abbotsford men were amazed by the transformation in Mpokathe from that day forward. He had discovered a vision, a dream for his future, and he grasped it with both hands. He told Stobbe that 80 percent of what he was learning on the farm could be applied in Lesotho, and he began asking Siemens questions about how to adapt practices used at Willow View to other crops and climates.

Willow View provides a unique opportunity to train farmers like Mpokathe. “Because we are a diverse operation, there are lots of crops to learn about. We sell a large percentage of our production right here from the farm, so we do the marketing, and a little bit of processing on a small scale,” says Siemens. “There’s a lot of things to learn.” 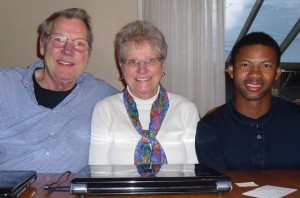 Thabang with his mentor, Elmer Stobbe.

Stobbe encouraged Mpokathe to envision himself as a “hub,” able to teach other farmers in Lesotho and “supply them with the inputs and the knowledge to be successful.” To attract initial investment for a farm, Stobbe helped Mpokathe create a professional business plan to bring back to his country.

“My work became very important to me and I started to see it in new perspectives,” writes Mpokathe, who remembers Willow View as his other family. “Instead of only going to work daily, I saw an opportunity to learn a lot out of it. I had interest and eagerness to learn and gain new knowledge and understanding, learn new skills, and adapt and be ready to apply them back home.”

Mpokathe returned to Lesotho in summer 2012, yet he and Stobbe still connect regularly by phone. Despite meeting with a government minister and a bank, Mpokathe struggled to raise capital for a proposed greenhouse and a submersible pump for his small farm. Stobbe helped him search for investors, supporting him through the death of his father, and in his new role as provider for his younger siblings. Currently, Mpokathe and Stobbe have secured a government contract and funding from a private investor; the future seems promising.

Entwined throughout Mpokathe’s story is his gratitude for Stobbe, his mentor, friend, and advisor: “He showed me that life is all about love no matter the colour of the skin. He really wanted to learn about me and life in Africa, and so I wanted to learn about his life. I shared with him honestly everything like I was dying, and he did the same, always encouraging and motivating. We built a culture bridge and came to each other;…much of the success I had is because of Elmer.”

Stobbe says his eyes were opened by Mpokathe’s ability and initiative, and he has a great respect for his student. “When I talk to people who know Thabang or have seen Thabang,” he says, “they are all amazed at what he has done.”

Paul Esau wrote this story as a communications intern with CCMBC and the MB Herald.

Read more of Thabang’s story in his own words here.

Read an update about Thabang’s finance journey (and a special prayer request) here.