What's New
Through the conflict, life carries on in Ukraine
A FOCUS on Mission
Must Patience Be So Slow?
Harold Jantz: A Heart for the Mennonite Story
Lorlie Barkman: A Life of Creative Engagement
Last Days, First Days
Women in Ministry: Bertha Dyck
January Moment in Prayer “Holy Spirit—Fill Us!”
The Church as the Patient Body of Christ
Advent: Making Much of Jesus: Christmas Day
Home News “I feel it’s my country now” 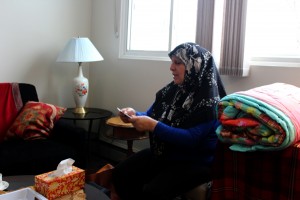 The greeting you get when visiting Yhya Al Kurdi’s apartment is full of excitement. Before you actually reach the door, Al Kurdi has opened it and stands at the end of the long corridor, waiting as you walk the rest of the way. Though he doesn’t know much English yet, he’ll give an enthusiastic, “hello, hello, hello!” as he ushers you inside. It’s been a long time since he had a safe home to invite anyone into.

Al Kurdi, along with his wife Fatoum, and two of their seven children, Mohammad and Amjad, are some of the more than 15,000 Syrian refugees who have arrived in Canada since November 4, 2015. The family landed in Winnipeg in November 2015, sponsored by River East Mennonite Brethren church, through Mennonite Central Committee’s (MCC) sponsorship agreement.

Like many people displaced by the conflict, the Al Kurdis had a good life in Syria before the war. They owned a home in Aleppo, had a car, they are well educated, their children are doctors and lawyers. Al Kurdi had a good job as a teacher and a writer.

But then war broke out. At first, they left home temporarily, taking shelter in nearby communities for a few days at a time, until growing conflict made clear it was time to leave. Al Kurdi “took [the family] to Lebanon so they would not see anything of the war,” he says. They took a bus – driving around areas of conflict turned a six-hour trip into a day-and-a-half journey.

While Lebanon was less dangerous, it wasn’t a good life. They lived in poor housing. Amjad, now 17, who should have been in school, had to work along with the rest of the family. The jobs they could get didn’t pay enough to cover all their expenses. And Amjad who has had ongoing stomach problems was not able to get proper medical care.

Now, they’ve got a chance to build a new life in Canada. The family applied for resettlement with the United Nations and were matched with the Winnipeg congregation through MCC. The congregation found the family an apartment and is helping them adjust to their new setting. 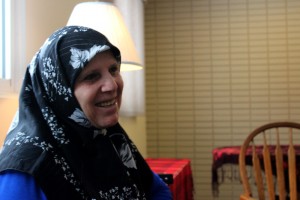 “The first time I met the sponsors here I felt like crying,” Al Kurdi says, tears of both joy and sadness. Their new life in Canada was exciting, but he wanted the whole family to have the same chance. They still have children in Lebanon, Algeria and Germany and other family in Syria. “I wish all my children were coming together on the same day with me,” he says.

While they only arrived in November, they’re learning quickly, taking English classes, getting groceries, and Amjad’s health is improving with medical attention. The family soon developed an appreciation for life in Canada. “I feel it’s my country now,” says Al Kurdi.

When Al Kurdi was handed a new toque from one of the sponsors, he immediately pulled it on, raised his armed and exclaimed “I am Canadian!”

At their new home in Winnipeg Al Kurdi boasts about Fatoum’s Arabic cooking, and says he enjoys having people come to visit and share food. “I’m still sad, in shock,” he says. “But when I see people welcoming me, asking how I’m doing starting life here, I feel much better.”

—Emily Loewen is a writer for MCC Canada.

Read more about sponsoring a refugee: