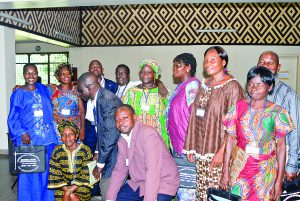 A historic international consultation on education in Mennonite schools of the Democratic Republic of Congo was held in Kinshasa, May 19–21.

Leading educators from each of the three national Mennonite conferences in Congo, their national church presidents, as well as several international observer participants, met to consult together how Mennonite primary and secondary schools in Congo might be strengthened.

In Congo, Mennonite schools, as also those in the country’s other faith communities, are co-managed with the government, but with total religious freedom. The government establishes the general curriculum, but each faith community can establish its own curriculum in the area of religious instruction. The government also pays salaries, as it is able, which is usually less than required. Hence, teachers struggle to survive. Faith communities provide school buildings and personnel, and generally manage the schools.

In the Mennonite world, there is no comparable education system. The three national Mennonite conferences in Congo operate more than 300 primary and secondary schools, with a student population of more than 50,000.

The current status of schools in Congo is the result, in part, of a tragic history. In 1973, the national government expropriated all church schools in Congo, including Mennonite schools. The government failed in its operation of the schools, and in 1976 gave them back to the churches.

What the churches received back were schools that had been ransacked and depleted of their resources. Since then, schools, though crowded, have largely remained in disrepair and devoid of even basics such as textbooks. Mennonite mission agencies have moved on to other agendas, so schools begun during the missionary era have few global advocates and little external support.

Professor Andre Masiala ma Solo, former coordinator for primary and secondary schools of the Protestant churches of Congo, noted in his plenary address that “the level of a country is a reflection of the level of its education. Education is the foundation of development. Educate, or perish.” He challenged consultation participants to make the Mennonite system of education a model for Congo.

Given the overwhelming challenge of upgrading all schools, a leading resolution of the consultation was for each of the national conferences to establish perhaps two or three model schools as a beginning.

Consultation workshops focused on matters such as how to integrate Mennonite history and doctrine into the Mennonite educational system in Congo, the role of chaplains in the schools, technology, creating an inter-Mennonite partnership in education in Congo, and the like.

The consultation developed out of conversations between Pakisa Tshimika of Mama Makeka House of Hope, Fresno, Cal., appointed for this task by ICOMB, and the three national church presidents in Congo. The AIMS Education Foundation of Fresno provided a financial seed grant; Mennonite World Conference and ICOMB partnered as global sponsors. The Mennonite Brethren delegation was led by president Damien Pelende.

A post-consultation meeting of the three national presidents and planners outlined follow-up steps, which now serve as the Congolese base for moving forward.