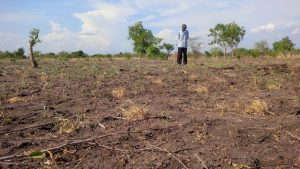 A Malawian farmer stands with his crop, which has been devastated by El Nino-related drought. (Photo/World Renew)

After responding to prolonged drought conditions in parts of Africa last year, Canadian Foodgrains Bank is gearing up to help more people affected by erratic weather conditions in eastern Africa in 2017.

The erratic weather – too much rain in some places, not enough in others – is hitting countries such as Somalia, Malawi and parts of Ethiopia and Kenya the hardest.

The weather conditions are part of a particularly harsh El Nino weather event that began in 2015. Through its members, the Foodgrains Bank has so far responded to the El Nino crisis with nine projects, totaling $4.4 million.

“Such erratic weather conditions could be disastrous for vulnerable communities struggling to recover,” says Barbara Macdonald, who directs International Programs for the Foodgrains Bank.

“We are deeply concerned about the situation,” she says. “That so many people are again being affected by erratic weather is very alarming.”

Currently, the Foodgrains Bank is responding through its member World Renew in south-eastern Kenya with an emergency food project for 1,500 drought-affected households.

The project, which totals $495,000, is providing rations of maize, beans, oil and salt for four months, as well as a seed distribution packet aimed at helping families regain their livelihoods.

In another project, through its member Presbyterian World Service & Development, with financial support from The United Church of Canada, the Foodgrains Bank is providing emergency food for 3,470 households in southern Malawi for five months.

The assistance, which totals $762,000, will provide relief for families already struggling due to drought-induced crop failure in 2016.

“Through all of these projects, we are continually hoping and praying the rain will come to drought-affected areas at its usual time, and people can return to their normal activities,” says Macdonald.

“We do know, however, that more help is urgently needed,” she adds, noting that drought across Africa is expected to continue in the coming months.

One example where drought may have extreme consequences in the coming months is in Somalia. According to a report from the Inter Agency Working Group on Disaster Preparedness for East and Central Africa, a coalition of large international humanitarian agencies, famine is a possibility in Somalia, where five million people currently need humanitarian assistance.

This isn’t the first time the region has been impacted by severe weather. In 2011, famine was declared in Somalia, where 260,000 people died as a result of a prolonged drought and subsequent hunger crisis.

A lot of progress has been made since then, but this current crisis has potential to set back some of the gains that have been made.

“One of the things we learned from the 2011 crisis is that responding earlier is more effective than responding later,” says Macdonald.

“When you wait too long to respond, people have already sold off their livestock in exchange for food, or have already been forced to eat seed they could have used to plant when the rains come again,” she says. “This makes it doubly hard for them to regain their livelihoods when the crisis is over.”