What's New
Multiply September Ukraine Updates
Volunteers in B.C. honour Leamington woman tragically killed...
Delete or not to delete, that is the...
Believers bring water for drought baptism
Encouragement to those in the arena
Keeping attention and making an impact: A few...
Open hands to reconciliation
From the editor
Approaching truth and reconciliation with love in our...
MB Seminary offers new MA in Transformational Leadership...
Home Arts & Culture Citizenship in a different kingdom

Citizenship in a different kingdom 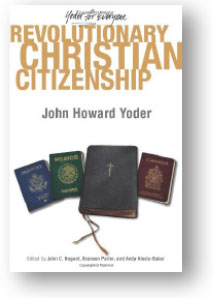 Yoder for Everyone series

Temporarily residing in the United States brings some light to what makes a Canadian “Canadian” and an American “American.” For example, I’ve noticed our public healthcare system frees Canadians from a great deal of financial stress. Canadians have an instinctive belief in all people’s right to access the same healthcare. This contrasts to an American perspective.

What beliefs and rights are rooted in us as citizens of the kingdom of God? What are some of the defining characteristics that make a Christian a true Jesus follower? What values and actions are so ingrained in us that others will notice we are from a different kingdom?

Yoder forces the reader to ask these questions that guide us to truth about our citizenship in the kingdom of God. Though much of the book focuses on military participation and nonviolence, his approach to the issue can be applied to a wide range of societal involvement.

Revolutionary Christian Citizenship is the second book in the Yoder for Everyone series which aims to make the teachings and theological insights of John Howard Yoder – considered the most famous Anabaptist theologian – available to the average reader. The series editors package Yoder’s lesser-known or unpublished articles and speeches in a way that does not require a master’s degree in theological studies to understand. Radical Christian Discipleship was published in 2012; Real Christian Fellowship is forthcoming in fall 2014.

The book has three parts. The first section, “The Witness of Jesus,” lays the foundation for why Christians should be involved with politics at all. Yoder’s teachings take around the life and politics of Jesus as the starting point. Yoder argues that Jesus was highly political and the church is called to follow his example.

Next, the early church was political by its very nature: the foundational statement, “Christ is Lord,” was a direct political challenge to the authority of Caesar. “Jesus is Lord” continues to be a direct political statement against the authority of our current governments. Government is not necessary evil; however, our primary citizenship and allegiance as Christians lies with One who is outside of institutions and structures.

We must reclaim the significance of that phrase: Jesus is Lord! Of our lives, yes, but also in our politics.

“The Witness of the Church” focuses on the issue of direct warfare/military battle and the church’s involvement. Though Yoder is an adamant pacifist, he humbly directs much of his attention to the theology of just war, which he says is the most common war stance among the North American and even global church. He doesn’t agree with it, but he offers strong cautions and motive checks for those who do.

The final section, “Witness in Action,” hits close to home for 21st-century Christians. It deals with the individual involvement in the empires we inhabit, and how we choose to involve ourselves with the little matters. Many of these are in themselves political and war-related: topics as self-defence, voting, participating in Veteran’s Day and Memorial Day (U.S.) or Remembrance Day (Canada), paying income tax and conscientious objection.

A brief orientation to Yoder’s work

Any scholar or theologian looking to get a briefing on Yoder’s most significant topics would do well to pick up not only this book, but the others in the series as well. Consistently, the editors refer to the more complete works of Yoder on the various topics. If the basic concept offered in this book warrants more study, the reader finds resources to dig deeper (without wading through Yoder’s copious writings, books and volumes!).

For the average reader, Yoder accomplishes three things wonderfully. Though the articles and lectures date back more than half a century, the content is surprisingly relevant – in some ways more applicable today than when it was first presented. Yoder noted the key shifts in our cultural perspectives and attitudes when they were likely first beginning. One example is that of relative truth (“what’s true for you may not be true for me”) and the cultural saturation of pluralism.

Importantly, Yoder always brings these issues back to the life and teachings of Christ. From an unskilled hand, drawing on Jesus’ teaching can degrade into proof-texting (selecting an applicable Gospel quote to support a modern teaching), but Yoder’s Christ-centred teaching lets Jesus’ life lay the foundation for our belief, not the other way around.

What kind of citizenship?

With “citizenship” in the title, I imagined the book would speak more broadly of a Christian’s identity as citizen of a different realm with a different ruler, as opposed to citizens of America or Canada or any other country. I thought the book might approach a wide variety of topics revolving around citizenship, including how to change our perspective of who we belong to, how to live differently in the everyday culture of our nations.

However, the main topic of Revolutionary Christian Citizenship is pacifism and how we understand our place in history – specifically within a country at war. In that regard, it develops a fairly robust theology in a limited number of pages. Even topics like voting and income tax are examined almost exclusively as they relate to pacifism or militarism. Perhaps it should have been called Revolutionary Christian Pacifism or Nonviolence, to avoid misguiding the potential reader into what they will be reading about.

Furthermore, the U.S. military is the overriding context for the discussion, making a basic understanding of past and present American history beneficial though not absolutely necessary.

A word on scandal

Yoder’s abuse of power in gender relationships has been the subject of conversations in Anabaptist circles, and the publisher has begun including an advisory statement in new editions of his books. Though I do not want to diminish the seriousness of his actions, I would suggest that the words and thoughts that he has brought to the Anabaptist table should still be considered with the full weight of any other serious theologian. God speaks through sinful human beings all throughout history – in fact, it’s his only choice (besides through Christ). Should we abandon the Psalms that David wrote because of his involvement with Bathsheba? No, of course not! Let us not throw out Yoder’s words with his actions, except where they find a sinful harmony.

Should I buy it?

Overall, the first two installments of the Yoder for Everyone series are great reads (notwithstanding a few editing mistakes). Accessible introductions to Yoder’s teaching, they challenge the current culture, forcing the reader to see through a Christ-centred perspective.

Revolutionary Christian Citizenship challenged me to consider every aspect of how I relate to the government, holding that in tension with the kingdom to which I truly belong. I’m not primarily a Canadian residing in the United States; I am a citizen of the kingdom of God along with all my brothers and sisters here.

I recommend Revolutionary Christian Citizenship to anyone serious about his or her allegiance to the kingdom of God in contrast to the kingdom of the world. Politics and Jesus do indeed mix – and the church is responsible for carrying on Christ’s work among the kingdoms of this world.

Meaningful communion in an internet culture

New thinking for a new day in church...

MennoMedia to include “publisher’s statement” in John Howard...

The article says, “Though I do not want to diminish the seriousness of his actions, I would suggest that the words and thoughts that he has brought to the Anabaptist table should still be considered with the full weight of any other serious theologian. God speaks through sinful human beings all throughout history – in fact, it’s his only choice (besides through Christ). Should we abandon the Psalms that David wrote because of his involvement with Bathsheba? No, of course not! Let us not throw out Yoder’s words with his actions, except where they find a sinful harmony.”

King David sinned dreadfully in the incident of Uriah and Bathsheba — adultery, murder, and coverup. But he repented, apparently sincerely, when confronted with his sin. David and his family members nonetheless reaped some chilling consequences for his wickedness.

In contrast, John Howard Yoder was evidently guilty of “widespread sexual harassment and abuse” over a period of “many years,” and he had a practice of “out-manipulating persons who sought to confront him, along with providing his own theological rationalization for his sexual activities.” All this has been frankly reported in the MB Herald: https://mbherald.com/unfinished-business-with-john-howard-yoder/

I suggest the literary work of such a man should not be held in high regard. Do Mennonites not have other, more godly theologians for young people to intellectually interact with?