What's New
A FOCUS on Mission
Must Patience Be So Slow?
Harold Jantz: A Heart for the Mennonite Story
Lorlie Barkman: A Life of Creative Engagement
Last Days, First Days
Women in Ministry: Bertha Dyck
January Moment in Prayer “Holy Spirit—Fill Us!”
The Church as the Patient Body of Christ
Advent: Making Much of Jesus: Christmas Day
Advent: Making Much of Jesus: Fourth Advent
Home PeopleAnniversaries Church anniversary – Coaldale 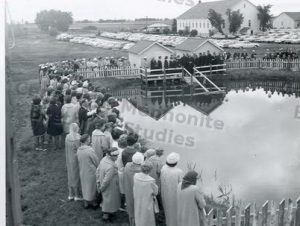 A baptism at Coaldale MB Church during the 1940s. After the influx of refugees from Germany and Russia post-World War II, the church held more than 100 baptisms over three years. PHOTO: MAID collection – CMBS NP149-01-1687

“Great is Thy Faithfulness” was the theme of the Apr. 24, 2016 morning service on the 90th anniversary of the first Mennonite Brethren church in Alberta, Coaldale MB.

“Throughout all those years, God was so faithful in guiding, supplying, forgiving and loving,” long-time member Elvira Dueck wrote on the occasion of the anniversary. “He supplied leadership and ministers who taught the true Word of God and challenged people to serve in various vocations and areas all over the world.”

Led by Klaas Enns, 29 new immigrants from Russia organized in the hayloft of a barn southeast of town, May 23, 1926. By Jan. 27, 1929, the growing group dedicated their new, 32 x 52-foot sanctuary, built entirely by volunteer labour.

The church added annexes as the congregation outgrew the space. In 1939, the church completed a 600-seat sanctuary – just in time to host the national MB convention.

The 1950s were full of change: the church launched the “Gospel Bells” radio program in 1952, membership peaked at 616 in 1955, David J. Pankratz began as the first full-time paid pastor in 1967, bilingual services began with English alongside German in 1958. The decade ended with launching the “Brot des Leben” radio program.

The congregation supported a church plant in neighbouring Lethbridge in 1963.

In 1971, the congregation moved to its present location in the town of Coaldale.

Today, the congregation has small group ministries for men, women, and youth, weekly clubs for boys and girls and a summer outreach soccer camp in partnership with Athletes in Action. Lead pastor is Gary Burke.

—with files from Elvira Dueck, the celebration service bulletin, GAMEO