What's New
A FOCUS on Mission
Must Patience Be So Slow?
Harold Jantz: A Heart for the Mennonite Story
Lorlie Barkman: A Life of Creative Engagement
Last Days, First Days
Women in Ministry: Bertha Dyck
January Moment in Prayer “Holy Spirit—Fill Us!”
The Church as the Patient Body of Christ
Advent: Making Much of Jesus: Christmas Day
Advent: Making Much of Jesus: Fourth Advent
Home PeopleAnniversaries Church plant celebrates 50 years 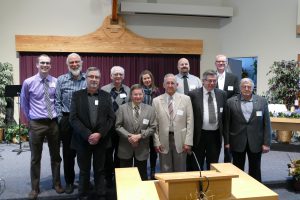 A small group began meeting in pastor Art Martens’ home Nov. 10, 1965. Signing the charter Mar. 13, 1966, were 10 members from two diverse groups: Mennonite Brethren with roots in South Russia and new believers from Woodrow, Sask., with a background in Swabia, Germany – each with their own German dialect.

When Seven Persons (General Conference) Mennonite Church closed in 1968, a large number joined Crestwood. Navigating that era’s narrative of suspicion between MB and GC Mennonites, Crestwood accepted attenders from a GC background as full members in 1975. During Jake Penner’s pastorate (1978–1981), the option of baptism by pouring was affirmed.

The group met in a strip mall until they built a church across the street in 1969. During Mark Jantzen’s tenure (1990–97), the church added a new sanctuary, with room for relationship building after the service. The Jan. 1, 1995, dedication followed “nine years of planning and two years of building without a severe clash,” recalls building committee member Ernie Nickel. Crestwood’s present membership of 60 shares their facility with The Life Church and Amor En Accion.

The church remembers the end of Murray Schmidt’s pastorate (1998–2004) as a time of seeking and offering forgiveness. Before Murray and Diana left for mission work in Kenya, Crestwood ordained them, an act that “[did] much in healing hurts.”

Current pastor Kevin Koop echoes the founding minister’s words from 1966: “For this work to continue, much determination is needed…. We as a church are needed here, and we are here to stay.”

—Angeline Schellenberg with files from “Together in Christ: The story of the Crestwood MB Church” by Kevin Koop

Click here to read “Together in Christ: The story of the Crestwood MB Church”

“Our Homemaker, who art in heaven”

Where does God live?