What's New
Through the conflict, life carries on in Ukraine
A FOCUS on Mission
Must Patience Be So Slow?
Harold Jantz: A Heart for the Mennonite Story
Lorlie Barkman: A Life of Creative Engagement
Last Days, First Days
Women in Ministry: Bertha Dyck
January Moment in Prayer “Holy Spirit—Fill Us!”
The Church as the Patient Body of Christ
Advent: Making Much of Jesus: Christmas Day
Home MB Herald Church and school as partners – a “pipe dream”?

Church and school as partners – a “pipe dream”? 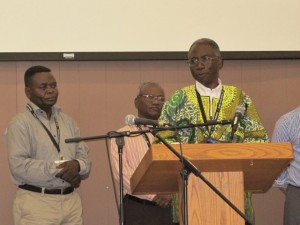 A constant hum of voices – simultaneous interpretation in Spanish and French, and explanatory words in Portuguese, German, and Russian – animated each of the sessions of the International Community of Mennonite Brethren’s Higher Education Consultation at Canadian Mennonite University, Winnipeg, June 13–17, as participants from around the world engaged with presentations on the theme “Church and School: Compañeros (co-labourers) in growing people of God.” ICOMB is a vehicle for partnership between the 19 Mennonite Brethren member conferences in 16 countries.

Mennonite Brethren church conference leaders, and directors, deans, and board members from 30 Mennonite Brethren and Mennonite institutes of higher learning from 17 countries on 5 continents (representatives from Angola were denied visas) spent a week living in the school dormitories, thinking, eating, discussing, laughing, and learning together through a daily schedule of singing, devotions, plenary addresses, round-table discussions, workshops, and prayer. “We go by first names; nobody asks to be called ‘Dr.,’” said Arthur Duck, director of Faculdade Fidelis, Curitiba, Brazil. 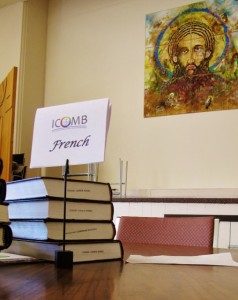 Participants spoke English, French, and Spanish. Translation was provided at the tables.

Plenary addresses each morning were followed by a question period, then nearly an hour of round-table discussion. The first morning, Alfred Neufeld, rector and dean of the Evangelical University of Paraguay, introduced the language of “dialysis” for the mission of church and school. His address on “growing people of faith in Anabaptist–Mennonite (MB) tradition” drew on the late missiologist Paul Hiebert’s scholarship on contextualization and mission to provide a framework for the week’s thinking. Christians are to neither embrace nor ignore culture, but to transform their context with the biblical message, said Neufeld. Neufeld concluded with a call (for Mennonite Brethren in particular) to enlarge their understanding of conversion, of church and the kingdom of God, to enlarge their concept of salvation, and to explore the idea of the evangelization of culture. His image of “cultural dialysis” – cleaning out toxic elements and unhealthy patterns – as the mission of church and school was repeated in discussions and workshops throughout the week.

Are church and school truly compañeros?

A rare pairing in a schedule headlined by international scholars like DR Congo’s Nzuzi Mukawa and Paraguay’s Alfred Neufeld, two Canadians gave Thursday morning’s plenary presentations on “compañeros in growing the relationship between church and school.” They addressed one of the major challenges faced by all the schools represented, and highlighted one of the ironies of the consultation – it was mainly academics talking to other academics about working collaboratively with churches.

Schools that provide theological education are “an arm” of the church, said presenter CMU president Gerald Gerbrandt in “What I (my school) would like the church to contribute to the relationship between church and school.” He spoke of schools as not merely a partner (parallel entity) but a part of the church. He called for church to support school through sending students, seeking to collaborate, funding, praying, and providing a home for students – a safe place to ask questions and test faith; a safe place to fail as they exercise growing skills in service and leadership.

Stephen Dintaman of LCC University College, Lithuania, asked from the floor whether Gerbrandt’s vision was “a pipe dream” – currently, school is “more of a semiautonomous arm.” It’s “aspirational,” Gerbrandt acknowledged, but “worth working toward.” For the most part, Gerbrandt was preaching to the converted.

Interim ICOMB executive secretary and former executive director of the Canadian Conference of MB Churches David Wiebe’s reverse presentation, “What I (my church) would like the school to contribute” had particular resonance around his request that schools “be careful in their discipleship role,” and teach not only how to analyze and criticize, but also how to affirm the positive and build on strengths. “We need to develop stewardship of deconstruction,” said Columbia Bible College director of intercultural studies Bryan Born in discussion time, “because at the end, if that’s all we have, it’s just destruction.”

Compañeros in growing a people of faith in the Anabaptist-Mennonite tradition,” Congolese educator Pascal Kulungu spoke about his vision for holistic peace witness in his country.

“I was walking on Huntington Blvd. (in Fresno, Cal.) when I saw writing on the wall, saying ‘Centre for peace and conflict studies,’” said Kulungu. It was “like Adam seeing his wife for the first time.” After completing a BA in administration, he did a masters in leadership and peacebuilding.

Now administrator of finance for the six-denomination-initiated Christian University of Kinshasa (UCKin), the self-described “product of missionary work in Congo” founded the Centre for Peacebuilding, Leadership, and Good Governance in 2002. “The church started to plant those seeds (of peacebuilding) in me, and school took over,” he said. Through his centre, Kulungu attempts to teach people “they have to serve the church instead of be served” in a society where “heritage of power means entitlement…. Peacemaking too often gets isolated [from leadership training].”

The man known as “Reverend Pascal” for his conflict transformation work across Africa’s second-largest country plans to run for office in the November 2011 elections because “when you live in a country where things are not running well, you have to change your lens.” Answering concerns about power corrupting, he responds “to fight the lion, you go hunting, we say in Africa.”

Equipped with a vision for peace and good governance, Kulungu wants to “speak on behalf on the population in general and of Mennonites in particular.” The church should be “an advisor,” he says: DR Congo is officially 90 percent Christian.

“Pascal can’t be everywhere – we need to train others,” said UCKin president Komy Nsilu Diakubikua Nsilu through an interpreter. “That’s why we give 100 percent support to this program.”

Each school represented – from Bible college or discipleship training program to liberal arts university – had some 10 minutes to report on their students and faculty, programs, unique strengths, and challenges. Presentations came not only from MB institutions, but also Mennonite-church supported schools and multidenominational schools who participated in the unique education conference, unheard of elsewhere in the Anabaptist world. 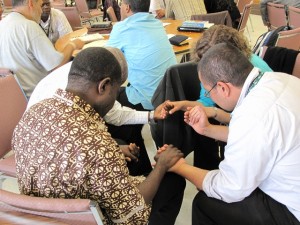 Each day closed with a concert of prayer. One day, Nzash Lumeya of Fresno (Cal.) School of Mission designated 12 participants to offer a prayer in their own (different) language. Another day, participants wrote prayers on Post-it notes, affixed them to posters marked worship, confession, commitment, personal request, thanksgiving, then toured the room to lift up the praises and petitions. Every inch of the thanksgiving sheet was covered with gratefulness for the consultation and fellowship with peers from around the world. Personal requests included prayer for family with recently deceased members, and confession recognized the rift that exists between churches and schools.

A findings committee gave a preliminary report on the consultation with observations falling under the subject headings listening, reflecting, counselling, and acting. Participants affirmed the pursuit of dialogue and greater connection between church and school; however, “the language is still dichotomous of church and school,” said Jim Pankratz, dean at Conrad Grebel University College, Waterloo, Ont.

“Church and school: we share the same vision,” said Mexican MB church leader Enrique Rodriguez through interpretation; “to form in order to transform.” And we share the same challenge – to call people out of the world to advance the vulnerable position of being in relationship, he continued. “We are to be missionaries to the world of culture, not just people,” said Pankratz, defining the mission as bringing every thought captive to Christ (2 Corinthians 10:5). 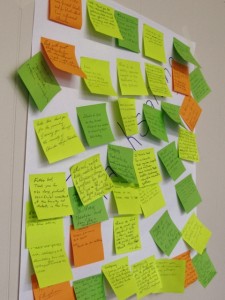 Participants leave notes of supplication and thanksgiving in concert of prayer.

•Offerings for the Japanese conference totalled $1,700: $1,200 (including a pledge from Fresno School of Mission) collected from consultation participants; $200 from Colombia; $300 from Peru. Shortly after the conference, the Evangelical Biblical Seminary in Osaka planned to send students to the earthquake-affected area on a work-service mission.

• In the past, the Fresno seminary was the training hub of the MB world; this event demonstrates MB theological education now happens around the globe. In 2010, ICOMB launched the Global Scholarship Fund to help leaders in the Global South access Bible and professional training in their own regions. Applicants must be supported by their national conference. MB Mission administrates the fund.

• Celebrating 150 Years – The Mennonite Brethren Church Around the World was printed in Spanish in Paraguay. With financial support from College Community Church (MB), Clovis, Cal., ICOMB distributed 13 copies to Spanish speakers and gave away 20 copies of the English version.

• Another book giveaway offered volumes culled from the CMU library, donated from the personal libraries of CMU professors, and from the MB Historical Commission’s inventory.

• A result of the 2007 consultation in Fresno, the ICOMB global education newsletter has been circulated quarterly for three years. It contains school news, promotes faculty exchange opportunities, and shares information about publications by MB faculty.