What's New
A FOCUS on Mission
Must Patience Be So Slow?
Harold Jantz: A Heart for the Mennonite Story
Lorlie Barkman: A Life of Creative Engagement
Last Days, First Days
Women in Ministry: Bertha Dyck
January Moment in Prayer “Holy Spirit—Fill Us!”
The Church as the Patient Body of Christ
Advent: Making Much of Jesus: Christmas Day
Advent: Making Much of Jesus: Fourth Advent
Home Life & Faithfeature articles Being a Christian friend in low income neighbourhoods

Being a Christian friend in low income neighbourhoods

*Name has been changed at request of participant.

MoveIn, a grassroots movement and ministry partner of the Canadian conference, provides opportunity for people from Christian churches to join teams that move into ethnically diverse, low income neighbourhoods.

As they live and work in the community, opportunities inevitably emerge for conversations about their lives and personal experiences of being a follower of Jesus.

Started five years ago in Toronto, the movement has spread to the U.S., England and Germany and grown to 250 MoveIners serving on 48 teams in 20 cities.

Broadly speaking, teams of five to eight people move into pre-determined “neighbourhood patches.” Team members have regular jobs or are students who intentionally look for ways to love and serve their neighbours. The team gets together weekly to pray for their neighbours.

This innovative approach for Christian service was recognized last fall by Mission Nexus, a network of 1,200 mission leaders in Canada and the U.S. MoveIn received the 2013 Innovation Award for breaking new ground by bringing together people from different churches to be a Christian presence among people who live in high density, low income neighbourhoods.

A high percentage of people in these neighbourhoods are from countries where they have limited or no access to the good news of Jesus, both historically and recently.

Moving to the big city

Rebecca grew up in Oakville, a suburban town in Southern Ontario known as one of the most affluent towns in Canada. She first heard about the movement five years ago through Facebook.

In spring 2009, she was among the 700 people who attended a conference that resulted in the formation of eight teams. Rebecca joined a team shortly after the conference and is now a staff member. 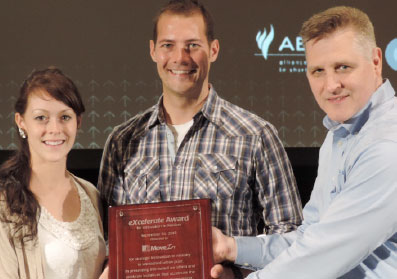 Her team’s neighbourhood patch is a complex of four 250-unit buildings in Toronto. As one of just a few people in her MoveIn team who owns a vehicle, she gets to know her neighbours by taking them to medical appointments, court hearings for immigration status and other appointments.

“It’s just being a servant and doing what Jesus would do,” she says. “We are trying to be God’s hands and feet in this neighbourhood.”

Rebecca’s team is starting a church plant. The anchor events of the church plant are Bible meetings held twice a month.

Through these regular interactions and prayers, relationships are developing and lives are being changed. The neighbourhood, she says, is experiencing fewer violent crimes; a change she believes is the result of prayer.

“Our desire is that people get to know God,” she says. “This is not like a short-term mission trip. Even though many neighbours are transient, we encourage long-term investment in the community.”

Read about the movement’s early days: “The Word became flesh and moved into the patch”