What's New
A matter of love: Reframing abortion
“Any chance you might be expecting a goldfish?”
Abortion, the image of God, and faithful witness...
Choosing motherhood: The sacrifice of honouring life
MWC Assembly small but full of joy
Bad back doesn’t hold back MDS volunteer
Transition in CCMBC National Faith and Life Leadership
Leading through the trauma of covid: Part three...
The church distracted: When the main thing is...
Remote wilderness rescue turns into service with MDS...
Home News Canadian government to match donations for Syrian refugee crisis 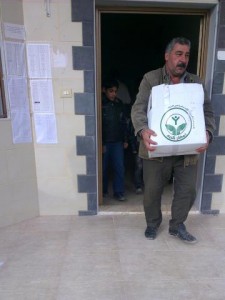 The Government of Canada has announced it will match all donations for the Syrian crisis response dollar-for-dollar through its new Syria Emergency Relief Fund.

Donations eligible for the match must be given to registered Canadian charities responding to the Syrian crisis, such as Canadian Foodgrains Bank, which has provided over $25 million worth of assistance to over 375,000 people affected by the Syrian crisis since 2012.

Currently, the Foodgrains Bank is responding to the needs of Syrian refugees in Jordan, Lebanon, and within Syria itself, through eight food distribution and food voucher projects.

“Right now, millions of people have been displaced from their homes. They are struggling to survive away from their homes and livelihoods, and as the war continues on, their sense of hope for an end to the war is diminishing,” says John Longhurst, who directs Resource and Public Engagement for the Foodgrains Bank.

“I hope the match from the Canadian government will spur many more Canadians to donate to help people affected by the conflict.”

The Canadian Government will match funds donated to help Syrians impacted by the conflict until Dec. 31, 2015. The Department of Foreign Affairs, Trade and Development will allocate these funds to established Canadian and international humanitarian organizations to support relief efforts to benefit the people affected by the Syrian crisis.

The Government of Canada has already committed $503.5 million in international humanitarian assistance funding in response to the Syrian crisis.

The extension, which now runs until Feb. 29, 2016, was announced January 7 in Ottawa by the Honourable Marie-Claude Bibeau, Minister of International Development and La Francophonie.

For every eligible dollar donated by individual Canadians to registered Canadian charities in response to the conflict in Syria, the government will continue to set aside one dollar – up to a total of $100 million – to the Fund.

“We welcome the extension of the government matching program for Syria,” says Jim Cornelius, executive director of Canadian Foodgrains Bank.

“While we are encouraged by the generosity of so many Canadians and congregations who are helping to sponsor Syrian refugees to come to Canada, it is also vital that Canadians continue to remember and support the millions of displaced Syrians still living in the region who need our assistance.  Finding resources to support displaced families inside Syria and those who have fled to surrounding countries is more urgent that ever.”

Since 2012, the Foodgrains Bank has provided over $30 million of assistance to Syrian refugees living in Lebanon and Jordan, as well as people inside Syria.

Through the Fund, the Government of Canada will provide assistance through international and Canadian humanitarian organizations to help meet basic humanitarian needs of people affected by the conflict in Syria, including shelter, food, health care and water. It will also provide protection and education for conflict-affected people in Syria and millions of refugees in Jordan, Lebanon and Turkey.

To make a donation to the Foodgrains Bank Syria crisis appeal, go to: www.foodgrainsbank.ca/campaigns/syria