What's New
A FOCUS on Mission
Must Patience Be So Slow?
Harold Jantz: A Heart for the Mennonite Story
Lorlie Barkman: A Life of Creative Engagement
Last Days, First Days
Women in Ministry: Bertha Dyck
January Moment in Prayer “Holy Spirit—Fill Us!”
The Church as the Patient Body of Christ
Advent: Making Much of Jesus: Christmas Day
Advent: Making Much of Jesus: Fourth Advent
Home Life & Faithfeature articles Big wins in Vancouver

North American MBs celebrate the spread of the gospel

While Vancouver is known as the world-class city that hosted the 2010 Winter Olympic Games, North American Mennonite Brethren will remember this city as the backdrop for another once-in-a-lifetime event: Celebration 2010, a weeklong occasion July 12–18 celebrating the 150th anniversary of the MB church.

Organizers anticipated Celebration 2010 would draw large numbers, similar to the joint gathering held eight years ago for the dissolution of the binational MB General Conference. While the 2002 three-day event, also held in Greater Vancouver, drew more than 1,500 attendees, including 195 U.S. and 440 Canadian delegates, the 2010 event attracted an estimated 900 people, including 173 U.S. and 369 Canadian conference delegates.

High cost, poor publicity, and the length of the event are among the reasons cited for low attendance. Some wonder if declining denominational loyalty is to blame, while others counter that younger Mennonite Brethren express their commitment to the church in ways other than attending large gatherings.

Winning the lost
Poll the 500-plus delegates who did attend Celebration 2010 about their historic experience and they will talk about winning. They aren’t referring to Olympic wins – or losses – on the slopes and at the ice rinks. Celebration 2010 confirms that the salvation of lost people ignites the passion of North American MBs. Stories of people finding Jesus – whether shared in the form of personal life transformation stories, reports of new local and global outreach efforts, or mission field narratives – is what energized delegates.

Other themes emerged throughout the week. Mennonite Brethren are global. We are unique yet embrace working with other denominations as part of Christ’s larger church. We see amazing fruit from the missionary efforts of early Mennonite Brethren. We “stand on the shoulders of giants” and do so with many feet.

The two Celebration 2010 evening programs were organized around the themes of identity (Wednesday) and mission (Friday). Sandwiched between was the one-day binational reporting session that included a brown-bag picnic lunch on the lawn outside Chandos Pattison Auditorium on Surrey’s Pacific Academy campus. Delegates met in separate locations Thursday evening and Friday morning and afternoon to conduct conference business. 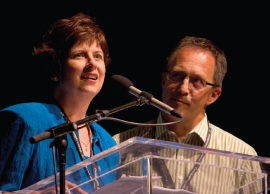 Giving thanks
Americans and Canadians kicked off Wednesday evening’s celebration awash in the chorus, “God of Wonders,” surrounded by waving flags from countries where the MB church exists today.
In their welcome, executive directors David Wiebe (CCMBC) and Ed Boschman (USMB) noted there is much for which to be thankful. Out of a gathering of 18 households, God has created a global family of 400,000 Mennonite Brethren who worship in more than 20 languages. “It seems God was using the movement to bring honour and glory to him,” said Wiebe.

Then and now
That spirit of praise and gratitude characterized the vignettes that followed. Against the backdrop of projected images, a reader’s theatre traced the history of MB identity from its origins among Dutch-German-Russian people. Stories from churches in Lenoir, N.C.; Montreal; Draper, Utah; and Altona, Man., offered a vivid picture of Mennonite Brethren today.

The evening’s featured speakers affirmed that the future hope is already a present reality. John Sankara Rao, director of evangelism and church planting for the India MB conference, converted from a Hindu background. He thanked Russian, Canadian, and U.S. Mennonite Brethren for their work in India, where the MB church numbers more than 100,000.

Nzuzi Mukawa, a professor at the School of Missiology in Kinshasa, DR Congo, spoke on behalf of the 100,000 MBs in his country when he said, “Thank you for giving us Jesus. He is our hope! He is our future!”

Called to suffer
Both Sankara Rao and Mukawa said suffering is part of the MB identity. They noted that Jesus suffered on the cross, 16th-century Anabaptists were martyred for their faithfulness, the first Mennonite Brethren were arrested and beaten for their convictions, and today, MBs in India and Africa die because of persecution and poverty.

The message was clear. Mennonite Brethren followers of Jesus will need to be a people who suffer. Fortunately, history also indicates that suffering has never hindered God’s work.

“Let’s fight the good fight and keep the faith even in pain and suffering,” Mukawa said. “That’s our calling. That’s our identity.”

Victor Wall, executive secretary for ICOMB, described the MB church as a global international church that blesses and empowers one another. Danisa Ndlovu, MWC president and a Zimbabwean, brought greetings and invited the delegates “to confront the issues we face in this life, the forces that hinder us from seeing God as he is.”

“A story of mission”
MBMSI executive director Randy Friesen told delegates, “The story of the MB family is a story of mission. Some have said Wycliffe lit a match, Luther lit a torch, and Anabaptists lit a bonfire.”

Using an interactive world map, Friesen and other MBMSI workers took delegates “around the world in 80 minutes” in a report that highlighted the history, current workers and projects, and the future vision in seven locations. The presentation is posted online at www.mbmsi.org/celebration2010.

Friesen reported that more than 1,500 short-term volunteers and 33 new missionaries, including 20 this past year, have worked with MBMSI over the past two years. Overall giving to MBMSI has risen by about 40 percent over the past five years, said Friesen.

“We are being stretched as a family to engage in global mission.”

“A perfect storm”
Jack Falk, chair of the MB Biblical Seminary board, described “a perfect storm of circumstances” that made changes necessary at the denomination’s 55-year-old school for theological graduate education, with campuses in Fresno, Cal., Langley, B.C., and Winnipeg.

MBBS is no different from other seminaries and some colleges that have been forced to grapple with declining student populations and increased online learning, said Falk. In Canada, an MBBS task force has been working to strengthen the partnership with the ACTS consortium and to provide additional resources to the program at CMU.

In the United States, the MBBS-Fresno campus has been transferred to Fresno Pacific University. Delegates learned that seminary president Lynn Jost continues as head of the seminary while other educational structures are being developed in both countries. Jost will also serve as functional head of the Fresno program in the long term.

The MBBS presentation concluded with a ceremony awarding an honorary doctorate to David Manuel (see page 2).

“We just speak about Jesus”
Friday evening, the plenary speaker was a media evangelist known as the “Billy Graham of North Africa.” The MBMSI worker (whose name is not printed to protect his ministry) talked about a powerful response to the gospel in one of the ripest fields in the world.

“This time is the harvest time in North Africa and the Middle East,” the speaker said. “We need to use the time because one day we will lose it. The door is open for you and me to share the gospel with Muslims everywhere in the world.

The response to this message is inspiring. Thousands come to Jesus every day, despite persecution. The underground church is growing so quickly that one house church leader complained about running out of room because of too many new believers every week.

“Still work to be done”
Underscoring the mission-minded message, a variety of stories told of Mennonite Brethren who are saying yes to God and to the mission field in Kansas City, Mo., Sacramento, Cal., Moose Jaw, Sask., and Vancouver.

“My mission in Kansas City and our mission in our everyday lives is not over,” said Paul Bartel. “There’s still work to be done.”

Communion, together with singing and a prayer time, was a fitting close for the evening. Worship leader Johnny Markin and team sent attendees back to their mission fields with a high-energy reminder of the source of salvation. Strains of “What can wash away my sin? Nothing but the blood of Jesus,” and “He is mighty to save, our God is mighty to save,” reverberated through the sanctuary.

Then a simple prayer served as both summary and sending for a people still on mission: “So, Lord, take us as you find us. We surrender. Amen.”