Seeing the city as a major urban mission field

With these facts, Canadian and American delegates to Celebration 2010 were introduced to a major urban mission field. Church Planting BC (so renamed because they work with other denominations) welcomed everyone to “Experience Vancouver.”

More than 200 delegates boarded five charter buses, each one hosted by one of the 10 Vancouver church planting couples. The delegates travelled Vancouver streets, seeing posh retail areas, homeless people on the Downtown Eastside and the ministries that assist them, and ordinary-looking, million-dollar homes. 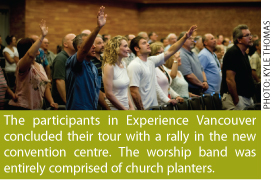 They visited church plant neighbourhoods, saw the “hubs” (shared office/meeting facilities provided by BCMB), and met church planters who told the story of bringing the gospel to the city. Delegates learned what it cost – personally, and in dollars.

One church planter recalled how he would walk through the trendy Yaletown condo area and be told to leave. Another reported that church planters can’t knock on the doors of highrise homes, so they get to know people in parks and community centres.

Delegates also heard that some church plants are already sponsoring missionaries abroad. They were told it’s a blessed frustration to minister to an immigrant population and to baptize 50 new believers, only to watch almost all of them move away as they settle in their new land. They heard another planter say that it’s all by God’s grace that the church he serves has grown to three services in two locations in just five years – with 70 percent of the 700 attending aged 20–30.

Though each bus took a slightly different route and visited different church plant neighbourhoods and locations, all five converged in Kitsilano’s Vanier Park, across the False Creek mouth from the highrises of Vancouver’s West End. Kitsilano is one of the most densely populated neighbourhoods in North America but has very few churches.

Experience Vancouver participants were invited to pray individually or in small groups for Vancouver, the unreached, and  the church planters. They prayed for fruit in this city and asked God to bless those who answered the call.

Following a stroll along the water’s edge to Granville Island, the groups visited one of the hubs (rented for $7,000 per month – a good rate) before proceeding to the dockside market for lunch. The day concluded with a rally in one of the meeting rooms at the new Vancouver Convention Centre, on the south shore of Vancouver harbour. 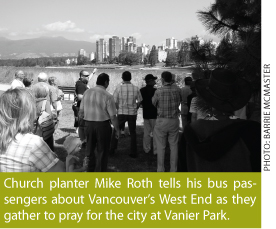 During the tour, participants asked many questions: How did church planters live in a city that’s so expensive? How do we keep our workers healthy? How do planters with families save for retirement or for their kids’ education?

A delegate said the tour helped her appreciate the challenges of church planting in a city.

“It sounds like a lot when you hear they have a budget of a million dollars,” another said, “until you think about the information we got today on the cost of renting homes and meeting space. The cost of doing business blew my mind!”

At the end of the day, one delegate said, “I get it. Now I see what this is about. I’ll pray.”

Living their history: Canadian MBs look back to...

Celebration 2010 by the numbers