Living their history: Canadian MBs look back to the future

The 90th convention of the Canadian Conference of MB Churches

As MBs from around the world gathered in Metro Vancouver to commemorate the 150th anniversary of the Mennonite Brethren church, North Langley Community Church hosted the 100th anniversary celebration of the Canadian Conference of MB Churches July 15–16.

At the Thursday evening banquet, Walter Unger, president emeritus at CBC, looked back at where Canadian MBs have been.

“We’ve lived in an era of change,” he said. Unger highlighted, among other things, the transition from German to English; the movement from arms-length evangelism to urban church planting; and the switch from congregational leadership to paid pastors and eldership models. The affirmation of women in leadership was also part of a shift from a legalistic definition of church to a more diverse ecclesiology.

“We stand on the shoulders of giants,” Unger concluded, “If we gain new perspectives, it’s because we’re carried high and held up by their stature.”

David Wiebe, CCMBC executive director, followed with some reflections on the current state of Canadian MBs. Wiebe noted that because of our pragmatic bent, MBs have borrowed models for the sake of mission which have, in turn, weakened our sense of unity and identity. While MBs have seen our carefully stewarded resources grow, the danger is that our wealth will undermine our reliance on God. For more than a century, MBs have let each congregation decide on issues; this too has weakened our theological unity and identity. “We need to spend more time together discussing the theological issues of our time,” Wiebe said. “If we’re devolving everything down to the congregational level, where the church figures everything out for itself, where will we be in 30 years?”

Looking forward, Wiebe said, “Do I have hope for the future? Yes. Am I concerned? Yes.” In what may have been the boldest statement of all, Wiebe addressed what he called “the B.C. reality.” More than half of all Canadian MBs live in the province of B.C. “We should no longer speak pejoratively about that fact,” Wiebe said. 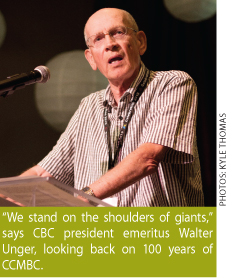 The grateful-yet-candid tone of Thursday spilled into Friday’s business session. In response to delegate feedback at Gathering 2008, the executive board conducted a formal evaluation of the Key Cities Initiative program (KCI). KCI was launched in 1998 to motivate and support church planting efforts in Canadian cities.

The report highlighted the following results of KCI:

Curiously, there was no discussion about the report.

There was also remarkably little discussion about the measurements committee report. At Gathering 2008, a near-unanimous vote launched Regenerate 21-01 (R21-01), a $4-million initiative to improve church health, mobilize leaders, and increase outreach efforts. In response to delegate feedback at Gathering 2008, the executive board promised ongoing evaluation of R21-01 initiatives.

The report identified some troubling trends, however. It appears many church leaders and congregations are either uninformed or confused about R21-01. Furthermore, the report states implementation of R21-01 has been limited by “territorialism,” lack of input from the provinces in the creation of R21-01, and, in some instances, because of negative experiences with KCI. “Overall,” the report concludes, “significant numbers of MB leaders and the congregations are yet to be convinced of the usefulness of Regenerate 21-01 initiatives to their specific context.”

Turning the page at MBBS

The report on the recent – and rapid – decision to transfer MBBS-Fresno to Fresno Pacific University, and the appointment of a task force to design a Canadian MB seminary generated comments from the floor. Delegates expressed disappointment that huge changes had taken place with very little input from local congregations, yet affirmed the final decision.  John Unger, task force chairperson, reported that surveys indicate a profound desire for a Canadian school to train pastors in an evangelical-Anabaptist perspective. The task force is considering a variety of models that include a cluster of faculty at multiple sites in Canada, partnerships with other schools, and distance education.

Following Gathering 2010, the task force – which had been reporting to MBBS – will give way to a commission appointed by and accountable to CCMBC. In regard to funding, Unger explained that MBBS had typically raised $500,000 per year from Canadian churches, individuals, and corporate donors, with some of those funds going to Fresno for administrative costs. In addition to those ongoing fundraising efforts, the conference recommended that the 2010–2011 budget provide an additional $200,000. With the sale of the Fresno property to FPU, Unger added, MBBS allocated $500,000 into a reserve fund for seminary operations in Canada. The fund will be held by MBBS Inc. until Canada determines the future of its seminary education.

With the proposal approved, Mark Burch, from Church Planting BC, expressed what had become a recurring theme: “Please involve us. This is critical!” 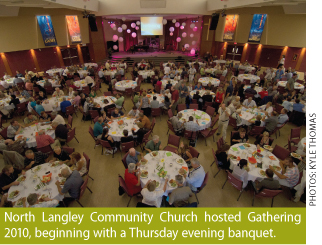 Delegates affirmed a $4.1 million budget, but not without some frank discussion. CCMBC is in a healthy financial position. The stewardship fund, which is more than $200 million, made $2.6 million in profit the previous year; the pension plan fund of about $49 million gained back what it had lost the previous year; under the leadership of Ron Wood, Christian Press has generated roughly $1 million in annual sales for 17 years.

What concerned delegates most, however, was the question of accountability. James Toews, pastor at Neighbourhood Church, Nanaimo, B.C., suggested it is inappropriate for the conference to rely on profits from the reserve funds to cover the cost of operations. “We need to practice a community hermeneutic when it comes to our finances,” Toews said. “These are fundamental decisions that must be discussed on the floor.”

The $300,000 drop in congregational support in 2009–2010 prompted several responses. When told that nothing happens when a church does not pay conference support, Fraserview pastor Dan Unrau’s reply generated applause: “We tell people at our church that when we get baptized, we give other people responsibility to mind our business. It’s inexcusable not to play our role. Let’s look each other in the eye and say, ‘Brothers and sisters, we have a responsibility.’”

In one of the final comments, Ken Peters, pastor at Saanich Community Church, Victoria, B.C., requested the Canadian conference consider investing in land and projects that would address Canadian poverty and homelessness.

In response to recent concerns regarding the conference’s understanding of redemption, the board of faith and life (BFL) presented a “Statement Concerning the Atonement.” The BFL announced that it was prepared to hold the next study conference on the subject in 2011.

The BFL reported that it continues to search for a theological director. James Toews criticized the decision, suggesting that a theological director would hinder a community hermeneutic, and undermine – rather than promote – theological unity.
The closing of the conference included farewells to, among others, Jascha Boge and David Wiebe. Boge, an engineer in Winnipeg, concluded 10 years as conference moderator. Paul Loewen of Mountain Park Community Church, Abbotsford, has stepped into the role. Wiebe, who has served as the executive director since governance restructuring created the position in 2004, has resigned his position effective the end of 2010. A successor has yet to be named.

Delegates left Gathering 2010 with a mixture of concerns and hopes, having affirmed that they do indeed want to be involved in working together as a conference. One trusts that in a century’s time, a future generation of MBs will look upon the leaders of today and say, “We stand on the shoulders of giants.”

Celebration 2010 by the numbers