What's New
Through the conflict, life carries on in Ukraine
A FOCUS on Mission
Must Patience Be So Slow?
Harold Jantz: A Heart for the Mennonite Story
Lorlie Barkman: A Life of Creative Engagement
Last Days, First Days
Women in Ministry: Bertha Dyck
January Moment in Prayer “Holy Spirit—Fill Us!”
The Church as the Patient Body of Christ
Advent: Making Much of Jesus: Christmas Day
Home News Congregations prepare to aid in tornado cleanup 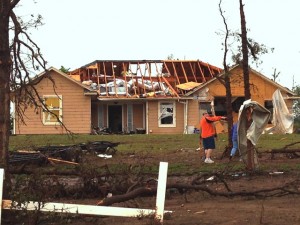 A home in Shawnee, Okla., damaged by the May 19 tornado. Photo courtesy MDS.

No members of Memorial Road MB Church (MRMBC), the USMB congregation in Edmond, Okla., were injured or lost their homes due to the series of tornados that struck the Oklahoma City metropolitan area May 19 and 20. But that doesn’t mean the devastation hasn’t impacted this congregation of 160.

“We don’t know of anyone from MRMBC involved,” says pastor Jeremy Jordan in an email to the Christian Leader. “However I think everybody within the church knows someone who was. The stories are only beginning. The destruction is absolutely mind-numbing.”

The weekend storm system spawned 26 tornadoes in Oklahoma, Kansas, Iowa, and Illinois. At least four separate twisters touched down in Central Oklahoma late Sunday afternoon, including one in Edmond, a northeast suburb of Oklahoma City, and another near the town of Shawnee, 35 miles southeast of Oklahoma City, that killed two people.

Governor Mary Fallin declared an emergency for 16 Oklahoma counties that suffered severe storms and flooding during the weekend.

Then came the massive tornado Monday afternoon that struck the southern part of the Oklahoma City metropolitan area, killing at least 24 people, including nine children. According to the National Weather Service, the Moore tornado was an EF5 and traveled a 17-mile path that included two elementary schools. 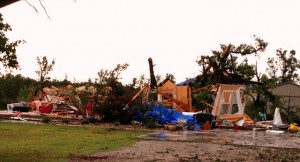 A home in Shawnee, Okla., destroyed by the May 19 tornado.
Photo courtesy MDS

While the National Weather Service estimates the tornado was at least a half-mile wide, other news reports estimated the width to be up to two miles at one point as the twister moved through Moore, a community of 41,000 people about 10 miles south of Oklahoma City. This is the fourth tornado to hit Moore since 1998.

“They have said it will be some time before they can even get into Moore to assess needs there,” said Jordan Tuesday afternoon. “Currently we are not actively involved with any clean up. Officials are still restricting access to first responders as they continue to search for missing people.”

“Our real work will begin in the days and weeks ahead,” says Jordan. “Once MDS has made plans, we will coordinate with them for future work opportunities.”

Jordan says the congregation is accepting donations, including non-perishable food, water, and toiletries. MRMBC is also accepting monetary donations and Jordan says the funds will be given directly to the relief efforts.

One of the congregations that has already begun collecting relief supplies is First MB Church (FMBC) in Wichita, Kan. According to an email announcement, the Kansas congregation is partnering with area churches to “maximize the response from the Wichita faith community” and is sending a FMBC representative with a team delivering donated supplies to Moore May 22. FMBC has also been in touch with MDS about sending volunteers to the Oklahoma City area. The church is posting updates on its website.

Jordan invites the USMB family to pray for the Memorial Road congregation and the community.

“One thing that is always welcome is prayer,” says Jordan. “Pray for those actively involved in search and rescue. Pray that God will guide their work, sustain their energy, and guard their hearts as they see, touch, and experience devastation in a way that will leave a lasting impression. Pray for the families experiencing loss of life, homes and hope. Pray that our God of hope could be made real to them in the midst of this tragedy.”

Jordan also requests prayer for the Oklahoma City congregations and believers. “Pray that they will overflow with hope by the power of the Holy Spirit and meet not only the physical needs of those impacted, but the spiritual as well,” he says.

“All of us will experience tragedy at some point, all of us have different ‘storms’ in our lives,” says Jordan, “but as believers in Jesus we can have hope. I love how Paul describes the life of a believer, ‘sorrowful, yet always rejoicing; poor, yet making many rich; having nothing, and yet possessing everything’ (2 Corinthians 6:10).”

Mennonite Disaster Service is regularly posting updates on ways to serve in the Oklahoma City area. MDS enjoys a long-standing partnership with the Oklahoma Volunteer Organizations Active in Disasters (VOAD) and anticipates working with partner agencies within the VOAD to respond to this disaster as needed. Mennonite World Review has posted an online story about the MDS response. MDS is accepting funds for the cleanup and recovery efforts of the Oklahoma tornadoes.

Connie Faber is editor of the Christian Leader, the national magazine of the U.S. MB conference. This story first appeared at usmb.org.