What's New
6 reasons to attend the MWC Global Assembly...
One too many
Just one more
A safe place in Winnipleg
When the sent are sent away
Leading through the trauma of covid: part one...
Church of Lithuania supports Ukraine Christians
A mennonite heart for refugees
A great time for building relationships
Multiply announces new General Director
Home News B.C. convention 2013

“Do not be afraid; keep on speaking, do not be silent.” That word from the Lord to Paul in Corinth (Acts 18:9), quoted by Rob Thiessen, set the tone for BCMB’s 2013 convention, held at Coquitlam’s Eagle Ridge Bible Fellowship, May 3–4.

Speaking to the convention for the first time in his new role as B.C. conference minister, Thiessen exhorted B.C. churches to take on the challenge in Acts 18:9. He brought wristbands, distributed to delegates at the conclusion of the first session, reading “Take courage. Keep on speaking.”

“I wonder about the trajectory of the church and where it will lead us,” said Thiessen. “We are wealthy, educated, and free.” There are about 30,000 Mennonite Brethren believers in B.C., he said. “What would we look like – with greater boldness?”

Boldness, he said, is not about personality. In the end, Peter’s personality failed him. “So what is the source that transformed Peter? It was the Holy Spirit.” 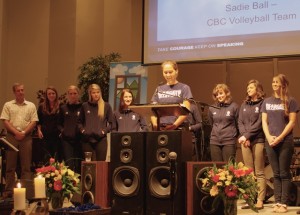 Columbia Bible College women’s volleyball team concluded each game in prayer with and for their opponents – win, lose, or draw. Team captain Sadie Ball said they later realized God brought them all the way to national finals, not to bring home a trophy, but because to be a bold witness, leaving a national impression. Read more here.

Thiessen played a video clip from Spielberg’s recent movie Lincoln, showing the president’s courage against a hostile cabinet as an example of bold speaking. In another video clip, Rachel Harris of Gardom Lake Bible Camp counselling staff told how she obeyed an urging to be transparent with the youth, and saw amazing results. And Thiessen brought up News1130 reporter Jesse Johnston to testify how Artisan pastor Nelson Boschman’s straight answers to Johnston’s questions shifted him from being a “curious skeptic” to a believer, deciding “Let’s take Jesus at his word.”

“We must share our hope,” Thiessen said. “When we practise radical peacemaking, that’s when we feel the enemy, and issues are sometimes tough.” As an example, homosexuality is a tough issue, he said, “but we cannot start treating people as the enemy. This is our opportunity to show the love of Christ. The gospel shines when we are bold to show our love.”

We can be preoccupied with safety, but “we are clothed in Christ. We have the Holy Spirit. Why should we be afraid? Boldness comes when people humble themselves and pray and the Holy Spirit comes.”

He urged delegates to go to the Lord for an antidote to the fear. “Tell God, ‘I just don’t have the joy. Lord, have mercy.’

“Then I think about the wonder that God loves me, and has forgiven me. That is the gospel,” he said. “You and I have got to get our gospel back.” 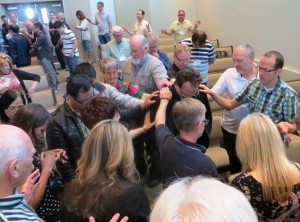 The BCMB convention celebrated the sweep of Mennonite Brethren ministries by both B.C. and Canada-wide church families.

It’s exciting to see increasing partnerships and collaborations among provincial and national MB groups, said Willy Reimer, Canadian conference executive director. “We recognize the need to work together,” he said.

“We pray for this country, our cities, our provinces,” he said. “We are here for that big-picture ministry. The only way anything happens is by the hand of God, moved by prayer. My biggest ask is for prayer.”

Mennonite Brethren Biblical Seminary Canada is just two years old, and celebrated graduation in April. President Bruce Guenther said the seminary is structured “to transform how we think about resourcing this faith community” in the midst of “incredible” social change. He said it is essential to be an active, intentional, lifelong learner.

Ron Toews, Canadian conference leadership development director, began in his national role by talking with many local church leaders. He found
• a desire by many MB churches to “be on a mission – in Canada,”
• awareness that “we need healthy leaders, especially in pastoral roles,”
• a desire to work toward “grace-motivated holiness,”
• a sense that “pastors want to give themselves to lifelong learning and spiritual renewal.”
Toews is in the process of creating equipping events and an online tool for pastor networking.

John Best, MB Mission regional mobilizer, said there is an opportunity this July to partner with MB churches and church plants through SOAR Vancouver. 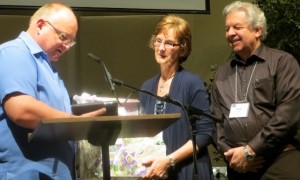 Retiring BCMB director of administration Marilyn Hiebert receives a “grandma” gift from moderator Ron van Akker as husband Rudy looks on. And, oh – something in an envelope.

Ask God to “stir up a brokenness in our hearts for the lost,” he said. “We need to pray with boldness. Can we pray for crazy things?” He said people have been praying for Vancouver for decades, and C2C can testify the Spirit is moving there.

Six C2C church plants are to be launched this year in B.C., 4 of them MB – two in Victoria, one in Vancouver, and one in Kelowna.

Merv Boschman, Camps BC director, said there have been many blessings in 2012–13, but also great challenges, most notably last summer’s devastating windstorm at Pines Bible Camp, and the loss of life of a 11-year-old camper. Pines director Gene Krahn said there was an “overwhelming” response from all across Canada and worldwide. Camp restoration continues, he said, thanks to many churches and individuals in BC sending workers and materials.

In 2012–13, Columbia Bible College registered 411 students, and graduated 88 from one, two, and four-year programs, reported president Bryan Born. “Our vision is to have all alumni make a kingdom difference all over the world,” he said. 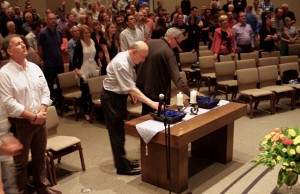 Wristbands, displaying the 2013 BC convention theme, were at the front of the stage during the conclusion of the opening session.