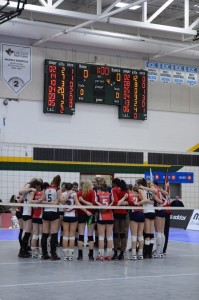 The 2012–2013 season was incredibly successful for the Columbia Bible College (CBC) Bearcats women’s volleyball team. Not only did they achieve an all-time best regular season finish (third), the team also made its first ever Nationals appearance, finishing eighth in the CCAA.

Yet, now that the semester is over and the last awards have been handed out, it’s the players work after the games that continues to earn admiration and spark discussion across the Lower Mainland and the larger volleyball community.

Athletic excellence was not the only area in which this year’s Bearcats set a precedent: they are also the only CBC team in memory to invite their opponents to pray with them after each home game. Following the final set – win or lose – the team would gather arm-in-arm with the athletes from the opposite side of the net, and pray for them.

Only one team refused the Bearcats’ invitation during the course of the season, including the provincial and national tournaments. The encouragement Bearcats players and coaches have received from members, parents, and coaches of the opposing teams testifies to how many have appreciated the gesture.

Sadie Ball, an MEI graduate and third-year Bearcat, explains that an American college gave them the idea during a pre-season tournament in the U.S., after that team invited the Bearcats into prayer following a game. Ball says the Bearcats latched onto the idea as a perfect expression of their witness. “People know that we’re a Christian college and we read the Bible,” she says. “We want to represent God in the best way possible, and praying with [opposing teams] was the simplest way we could do that.”

Surrounded by her team and coaches, Ball shared their experience at the BCMB convention May 4–5 at Eagle Ridge Bible Fellowship, Coquitlam, B.C. She told of an important moment during the national tournament in Lloydminster, Alta., when a bilingual teammate, Kiana Stearns, had the opportunity to pray in French with a team from Quebec. That prayer formed a special bond between the two squads, despite the pressure of national competition.

“There was an immediate connection between the two teams,” CBC head coach Duncan Harrison says. “For the remainder of the tournament, they showed up and cheered us on for our games, and we made a point of showing up and cheering for them at their games. We ended up sitting together with their players and coaches at the big finale, the gold medal match, and the awards ceremony.… It’s allowed some of our girls to share a little bit about our faith, and what we believe, and about the gospel.” 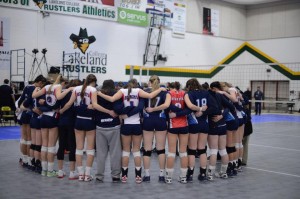 Near the end of the tournament, several players traded warm-up shirts as mementos of their budding friendship. According to Harrison, the two teams are discussing the possibility of training together or travelling together in the future.

The effects of the Bearcats’ prayers are still spreading. In mid-May, a U-16 girls’ volleyball gold medal final ended in prayer as well, before what Harrison describes as a “pretty shocked” crowd. One of the players in that game was the younger sister of a woman attending CBC, and had persuaded both her team and the opposing side to engage in prayer.

For her part, Ball says her team’s commitment to prayer was an eye-opening way to communicate God’s love in the midst of athletics. “That one prayer can change everything and can open up people’s hearts,” she explained. “We did feel that we became closer with the [other] teams just from praying, and it was easier to talk to them after the game.”

Under the leadership of athletic director Matt Kaminski, CBC Athletics is actively looking for ways, like the prayer initiative, to increase its emphasis upon Christian ministry within competition.

Kaminski says the program slogan “Sport is an Opportunity” in his previous experience with an Athletes in Action program deeply connected with him. “I think athletics is such a huge opportunity to have a platform to actually be tested and to live out your faith. It’s an opportunity to experience huge joys, low defeats, and learn to process those in a way which reflects and represents Christ and your faith well.”

He and Harrison both speak of the importance of athletic excellence as well, since the mutual respect formed by competition often creates the opportunities for ministry.

The women of the CBC volleyball team will be back in action next year for a new season, and, according to Harrison and Ball, are already planning ways to expand their prayer focus and find new ways to reach their opponents. Their perspective is perhaps best expressed in the words (translated from French) of the Quebec coach who witnessed the unique nature of the Bearcats first-hand at the national tournament:

“You can’t play against this team,” he posted on Facebook. “You play with them, even though they are on the other side of the net.”

—Paul Esau is a communications intern with CCMBC and the MB Herald.