What's New
How sweet the sound
One MCC Thrift Store Began With a Few...
A Hunger for Conversation
Getting the mental and emotional rest you need...
The Patience of God
2023 Spirit of MDS Fund accepting grant applications
October 2022 update from the CCMBC Executive Board
Arnold Community Church hosts block party to thank...
When Spring returns
An autumn reset
Home MB Herald Church planting boom unexpected 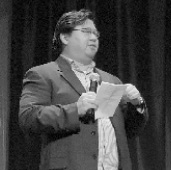 “I can’t believe Sonny [Mandagie, pictured] has planted 10 churches and still has all his hair!” said Mike Klassen, chair of the board of church extension.

It appeared this year’s B.C. conference annual convention would be a fairly routine gathering. Significant changes in direction were made last year and routine follow-up work was expected. But no one could forecast the explosion of church planting within B.C. over the year. And no one could predict that the convention’s physical arrangements would need radical revision at the last minute.

Just a week before 228 delegates and guests were due to arrive at Central Heights Church, Abbotsford, the floor collapsed during a major Christian music event in the sanctuary. (See page 17.)  While Central Heights immersed itself in pastoral care and practical details of the aftermath, B.C. conference administrator Marilyn Hiebert scrambled for a new convention venue.

North Langley Community Church offered to help. That weekend, as soon as pastor Rob Thiessen made the needs known, 60 people signed up to provide delegates with hospitality, ushering, parking, food service, and room setup. Media techs jumped in to help. Catering volunteers started to organize. By convention day, May 2, delegates arrived to a warm welcome, as if all of these arrangements had been planned well in advance. Central Heights people helped, too. Pastor Lyndon Plett brought his group to the new site to lead the convention’s worship. Central Heights caterers worked with North Langley to provide the meals.

Friday night was a celebration. Church planting and church planter numbers in B.C. are exceeding expectations. Four churches were admitted into the conference – three of them church plants.

The business of the convention went through quickly Saturday morning. A two-stage method of handling business was adopted, where proposals are presented for discussion mid-year through regional councils of church leader (COCL) meetings. Pastors and moderators are asked to attend the COCLs and report back to their churches, in the hope most delegates will be familiar with the business by convention time. The COCL system allows more time for non-business items when the conference convenes. For the first time, all of the documentation was available on the B.C. conference website two weeks prior to the convention for study and printing.

“God’s people need to understand the language of Jesus’ Great Commission,” said keynote speaker Tim Geddert, of Mennonite Brethren Biblical Seminary in Fresno. He said the Greek imperative verb in Matthew 28 means to disciple – disciple as we go, as we teach, and as we baptize – with all nations as our target. “The goal is the transformation of all people groups in the world.” But it does not mean believers must all “go” far away to make disciples, he said. Geddert also urged delegates to remember we are only witnesses of Christ’s love. It is the Holy Spirit that convicts, he said.