What's New
“I’m Sorry” : Pope Francis addresses a “deplorable...
A matter of love: Reframing abortion
“Any chance you might be expecting a goldfish?”
Abortion, the image of God, and faithful witness...
Choosing motherhood: The sacrifice of honouring life
MWC Assembly small but full of joy
Bad back doesn’t hold back MDS volunteer
Transition in CCMBC National Faith and Life Leadership
Leading through the trauma of covid: Part three...
The church distracted: When the main thing is...
Home MB Herald B.C. conference launches campus initiative

The 2009 convention, as conference minister Steve Berg put it, was the third in a series to make the B.C. conference’s annual meetings more productive.

A major issue – whether to permit individual churches to form their own societies and continue affiliation with the conference – was decided last year. Also last year, conference boards were restructured, becoming committees with less independent power.

This year’s meeting, held at South Abbotsford Church, May 1-2, finished off the updating process and set out some new initiatives, including a significant new ministry to students.

The convention opened Friday night, as is tradition, with celebration – of what God is doing in and through this set of churches. Part of that celebration was a reflection by Mel Fehr, pastor at Prince George’s Westwood Church, on the convention theme, “Share in His Holiness.”

Fehr started, “In the year that King Uzziah died,” then held his audience transfixed while he spoke and acted words of Scripture for a full eight minutes on holiness, discipline, and the harvest of righteousness. It flowed like an essay but was all Scripture, all memorized. He took the audience from Chronicles to Hebrews, ending with “Strive for peace with everyone and for holiness, without which no one will see the Lord.”

Jesus’ death on the cross was all about holiness, Fehr told delegates. “For he chose us in Christ, that we might be holy and unblemished.” To simply be “special” or “your unique self” in the light of what God has called us to be “is so lame,” he said. “We have a longing for authenticity. For a Christian, ‘authenticity’ is holiness.” God wants us to be like him, to be like Jesus.

People from other denominations are starting to hear about MB church planting in B.C., said Gord Fleming, director of Church Planting BC. They will ask why Mennonite Brethren plant so many churches. The answer is simple, Fleming told the convention; God is at work. Second, he said, it’s because of the many years this conference has been working on church planting. 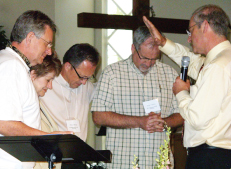 The major factor is the church planters themselves, he said. “Almost to a person, our church planters feel called to not just the city, but to the neighbourhood where they are working.” He said the committee works on that understanding.

Church planters are also put through an apprenticeship period, working in another plant first, so the likelihood of success through exposure to on-the-ground issues is high before the new planter starts.

Fleming said one must take risks in planting churches, but since 2001, there are 33 church plants in operation in BC – a “success rate” of 82 percent.

Four new church plants were admitted into membership of the B.C. Conference: Urban Journey in Vancouver’s Dunbar/Point Grey area, Real Life Church in Surrey’s Fleetwood district, Reality Vancouver in Vancouver’s Mount Pleasant area, and the House for All Nations church in Burnaby.
“We have 27 amazingly gifted pastors who are giving themselves to church planting,” said Fleming. “An exponential occurrence of church plants is taking place.”

New initiative – on campus
“If we want to mould and affect our culture in the future,” declared B.C. conference minister Steve Berg, “we need to be impacting our campuses.” Berg said that American studies show 80 percent of college-aged church attendees leave the faith, and there is little likelihood Canada’s statistics are much different.

That realization resulted in a new initiative at the conference level. A B.C. MB task force consisting of Berg, retired professors John Redekop and John Friesen, and student chaplains and church planters Andrew and Rebecca Stanley, was organized to tackle the issue. They agreed to start on the University of B.C. campus and to work with local churches to allow follow-up for MB chaplains and pastors in college areas. Already, the Stanleys are reaching out on the UBC campus, formalizing an opportunity to be part of the student chaplaincy association there.

Convention delegates were told that churches will be encouraged to alert chaplains about college-aged members attending schools. Where there are smaller post-secondary institutions, there may also be opportunity to involve local pastors in chaplaincy roles. The overall strategy is still being formulated, but Berg said, “We want local churches to continue their vision for student ministry.”

During a brief business session, delegates affirmed the student ministry initiative and formalized bylaw amendments to end the role and functions of the Council of Church Leaders (see MB Herald, May 2009.)

Delegates voted to admit the 4 new church plants and formally assented to the requests of 3 churches to withdraw from their conference association. One of the 3 is Forest Grove at Canim Lake, where an attempt was made to grow an MB church in a small building, now to be taken over by the Salvation Army. Central Heights Korean Church in Abbotsford ceased operations, as did The Meeting Place in Abbotsford.

Operating under a new policy adopted during the 2008 convention, North Langley MB Church received approval to hold its buildings and lands in its own church society.

The convention included committee breakout sessions. One that attracted strong participation was the pastoral ministries presentation by Jericho Ridge pastor Brad Sumner and ACTS professor Brian Cooper on current discussions of the atonement.

Attendance at the convention was 290. The gathering was filled with positive energy and motivation. Berg’s Saturday morning comments provided a rallying cry for delegates.“I want to call us as leaders to live as people with clean hearts and hands who serve in unclean places.”

Heard at the B.C. convention

“There are more evangelical Christians in the city of Abbotsford, B.C. than in the province of Quebec.”

Ten million people die each year for lack of adequate food and water.

“Only 3 percent of Vancouverites attend church regularly. Vancouver is a mission field.”

More than 5,000 kids came to B.C. MB camps in 2008, and some 1,000 made life-changing decisions. And some 300 young people, who volunteered to be part of the camp program, acquired valuable skills in leadership.—Arthur Loewen, chair, camping committee