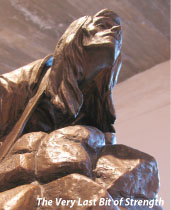 Suffering and faith go hand in hand in the story of Russian Germans in the 20th century.

A workshop and art exhibition at Mennonite World Conference Assembly 15 showed how German-speaking peoples – including Mennonites – in the former Soviet Union were treated as enemies of the people.

They endured deportation, forced labour, forced collectivization of farms and industries, arrests, detentions, resettlement, and pressure to give up their faith.

Art and artifacts from the Museum for German-Russian Cultural History in Detmold, Germany, displayed on the top floor of the Centro Familiar de Adoracion gave visual testimony to workshop presentations. Sketches by Kurt Hein and Ernst Dyck, and works by sculptor Jakob Wedel portray life under the Communist dictatorship.

Wedel’s Road of Suffering in bronze about the forced deportation of women to labour camps in 1942 depicts the farewell of conscripted women as they are torn from their children.

“I can still hear the crying and the sobbing,” the artist’s statement says. “I would like to forget about it, but my conscience pushes me again and again to tell people the truth about this horrible past.”

The Very Last Bit of Strength shows the artist’s mother in the work camp, her 30-year-old face that of an old woman. The piece is inscribed in memory of “our martyred mothers and sisters.”

Walter Sawatsky, professor of church history at Associated Mennonite Biblical Seminary, Elkhart, Ind., hosted a workshop, “Recovering the history of Mennonites in the USSR: 1930–1980” on loss and dispersal during the Soviet state war on religion.

People from Aussiedler groups in Germany who lived or had family in Russia – of which there are about 80,000 baptized members – are doing research and writing. “Many congregations in Germany want to do historical work now,” said Sawatsky, “to find their way.”

Katarina Neufeld, director of the Detmold museum, chronicled waves of repression that stripped Mennonites of religious identity and status, both on religious grounds and for being German.

Strategies of adaptation included spiritual leadership by women and alliances among Christians of various confessions.