What's New
MWC Assembly small but full of joy
Bad back doesn’t hold back MDS volunteer
Transition in CCMBC National Faith and Life Leadership
Leading through the trauma of covid: Part three...
The church distracted: When the main thing is...
Remote wilderness rescue turns into service with MDS...
How open is your mind?
Following Jesus together across barriers
2022 National Faith & Life report to the...
CCMBC 2022 national assembly summary
Home News Alpha in the omega years 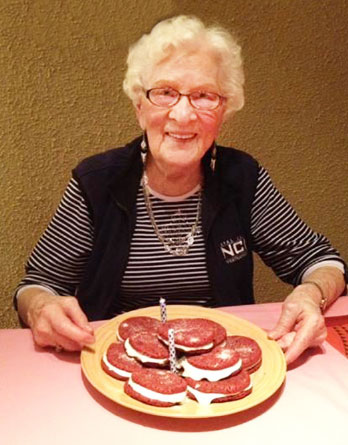 “I’ve been a Christian for 80 years, but I will never stop learning more of God’s love.”

This February, in her downtown seniors’ block, 93-year-old Anne Kroeker started a life-changing Bible study with her “younger” neighbours (in their 80s), half of whom haven’t attended church since childhood.

Kroeker’s church family since she and late husband Jacob moved from Winkler to Winnipeg in 1991, Portage Avenue Church introduced her to the Alpha program three years ago. When Peggy Jensen invited the congregation to participate, “It seemed as if she were speaking directly to me,” Kroeker says.

From the first session, Kroeker was “hooked.” With video lessons on everything from why did Jesus die to how prayer works, “Nicky Gumbel makes the plan of salvation so easy to understand,” she says.

With a burden to share this experience, Kroeker discussed the idea of hosting Alpha with neighbour Helen Siemens of Elmwood MB Church, who suggested Kroeker lead it.

At their weekly afternoon coffee in the main-floor mall, Kroeker gave her friends colourful invitations. “I have something to share,” she said. “I want to invite you to my place to talk about Christianity and what life is all about.”

“It hasn’t been easy for me to witness in the past. It takes nerve and courage. Would they come?” Kroeker wondered.

Eight women joined Kroeker and Siemens for cookies the first Wednesday. Minutes after the first meeting, one lady phoned Kroeker: “I just told someone in the mailroom what a great time we had. Can she come too?”

Participants said, “I haven’t been to church for many years.” Kroeker cites various circumstances, such as, “My husband wasn’t a believer,” or “I stopped after my parents no longer made me go.” With nearly half of them needing walkers or canes, travelling to a church building now would be difficult.

Since some of the women aren’t familiar with Scripture, Kroeker thought, “Wouldn’t it be nice if we all had the same Bible, so I could tell them the page numbers?” At church, Peter Suderman, a Gideon, came to her rescue with 10 large print New Testaments.

Many of the women come to meetings prepared, using the Alpha workbooks Jenson provided. Kroeker also gave them each an Our Daily Bread devotional. “My father was a Sunday school teacher, and we didn’t go to school without sitting together at the table for Bible reading and prayer,” she recalls. “That still guides me. I tell the ladies it’s a good way to start the day.”

“The one thing I hope they hold onto is that God loves them and forgives their sins,” says Kroeker, who encourages them to pray sentence prayers. “This is the easiest way to speak to God. Tell him how you feel…. Then you don’t have to worry.”

A teacher with questions

The women have questions about how to forgive when there’s a big hurt in the family, about prayer for healing in the face of chronic pain, and the Trinity. After raising two boys on her own and losing Jacob in 2001, Kroeker has questioned too.

“I told them, ‘I’m going to learn as much as you too because I’ve never really studied the Holy Spirit,’” says Kroeker. One lady called the session in which Nicky Gumbel compares being filled with the Spirit to making a furnace go “poof,” “the best of all.”

“I’m seeing changes. I can see it in their faces,” says Kroeker. “One looks peaceful. One was excited to share what she’d learned from The Purpose Driven Life.” One is going through a hard time, but “God won’t give up on her.”

“I don’t find it hard to love them at all,” she says, wiping away a tear.

That love is what has kept the women coming back. “I’m pretty sure if it had been in church they wouldn’t have been willing to come,” she says, “but they know me – they’ve been here for coffee before – so it wasn’t a big deal going to ‘Anne’s place.’”

“A lot of prayer has gone into this,” says Kroeker. People at church tell her, “We’re praying for you.”

Even though the Alpha course is complete, Kroeker says they’ll continue meeting. Other than the macular degeneration that prevents her from “seeing the dust,” she says, “the way I feel, l could go on for a while yet!”

“If we can plant the seed, God can do the rest,” she says. “A lot has to do with being available. I was willing. I was obedient.” If that’s all her friends see, that legacy means as much to Kroeker as anything in the workbook.

On the streets of Corinth: Bible study puts...