What's New
Tibetans in the Neighbourhood
MCC BC and MDS Flood Response and Partnership
Resilient Leadership: Praying against burnout
Boldly advancing the gospel from our knees
MCC sends food and relief to Cubans in...
Robert Dagenais, pastor of the Sainte-Thérèse church, is...
More donated hay needed to help farmers in...
“God’s time was perfect”
Hope and pray every day
Resilient Leadership: The gift of self care
Home MB HeraldColumns Why we need the Mennonite World Conference

Why we need the Mennonite World Conference 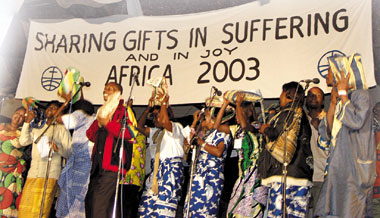 Animated singing was part of each meeting

The choir number was announced and I watched with anticipation. As they left their pews they began to sing. Just a little chant, really. (I love it when they sing on their way.) The 40 or so people filed into place, wearing amazing outfits. Once there, they stopped the chant, and started into the scheduled number.

The richness. The profusion of sights, sounds. The depth. This symbolizes what Mennonite World Conference is for me.

About 14 years ago MWC held its Assembly in Winnipeg. At the time a cold, dry skepticism about it pervaded the conversations I had with many in our MB Conference. It seemed the world fellowship had little life.

Now, however, electric spiritual energy flows in abundance in the World Conference. This energy comes from the “South” – conferences in the Mennonite and Brethren in Christ Anabaptist fellowship from primarily the southern hemisphere. They are passionate about God, about the church, about missions, about peace. 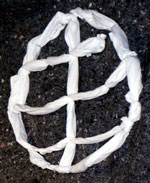 MWC logo made from knotted fabric

The South is characterized by a holistic theology that the North needs desperately. Not the bitterness of liberation theology but one that effectively combines love, evangelism and justice. The Kingdom of God for the whole person.

We hear the reminder often that “the local church is the hope of the world.” The Willow Creek Church of Chicago prominently featured that slogan on their Leadership Summit materials this summer. We in the North need that reminder, because it’s largely theoretical to us.

But so many of our brothers and sisters of the South live that on a daily basis. Literally. The local church helps put bread on the table. Sometimes it keeps people alive. In the Congo, for example, the Mennonite churches of Kikwit devised a plan to avoid the killings so many towns experienced in these last few years of civil war. The MWC is a place where we hear the stories of this struggle. We don’t just hear the stories – we feel them, because we’re face to face with survivors.

For others, the local church is the evangelistic hope. The Meserete Kristos Church of Ethiopia baptized 22,000 people last year. This year they expect to baptize 39,000! That’s 5000 more people than the membership of the Canadian Conference of MB Churches. We don’t just hear the numbers, we meet people like Emebet Mekonnen, a woman who trains church planters in the MKC school of evangelism. The MKC doesn’t just talk about it – they’re a church planting machine!

This passion spills over into the Assembly Gathered as well as General Council meetings. During Assembly the International Choir led us in singing from all the continents. Each continent led worship on each of five days. Suddenly our “worship style wars” seemed really foolish to me. We fight over musical taste on a tiny, narrow bandwidth of the broad musical spectrum available to us from the globe. Believe me, there’s musicality much harder to swallow than “rock” or “classical”. It was good to remember that this diversity is God’s doing! 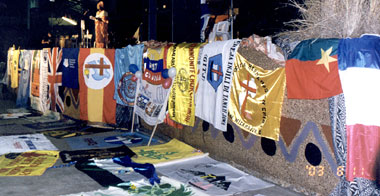 Flags from churches and conferences around the world line the stage

During three days of General Council meetings prior to Assembly, I encountered passion for God, evangelism and justice all rolled into one theology. Our agenda took us into territory like finding a common missions focus, finding a common core theology, developing relief strategies, and finding ways to share the gifts God has given us. The Mennonite Brethren are at the table and need to be there. We contribute to the admixture and enrich it. We also hear how others come at these issues. 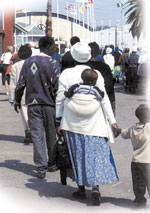 And finally, pragmatically, we need MWC to get us out of our cottages in Canada. If the world conference assembly had not been in Africa, I would not have visited our sister Mennonite Brethren conference in Congo. Now, more than ever before, news media paint a picture of danger in many countries. Travel agents steer clients away from most African countries. Yet, because we are members of the MWC, I had a responsibility to go to Zimbabwe. And to come that close without a visit to Congo would have been gaucherie of the highest order. (Most of our group also visited our Angolan community).

I believe MWC has the capacity to impact us as a Conference where we need it. In our spiritual fervour. In our evangelism and mission focus. In our need for holistic, shalom-based theology. In providing a space for sharing gifts meaningfully cross-hemisphere.

Siaka Traore, of Burkina Faso, spoke on Africa Day. He reflected on the fact that due to political trouble, food and gas shortages in Zimbabwe, and pressure from northern churches about personal safety, the MWC executive almost cancelled the Assembly, and would have moved the General Council meetings from Bulawayo to Johannesburg, South Africa. Traore said, “If we had not had the World Conference assembly here in Zimbabwe, I would have asked where in the world could we have a conference! Even the United States has experienced terrorism. There are no secure places in the world now. The only security is in God.”

Not only is he correct, he is from a part of the world where these words carry more weight.

Ambrocio Porcincula, of the Philippines, spoke on Asia day. Using Hosea as his text, he warned, “When you no longer focus on trying to discover and do God’s will, it is only a matter of time until you will pay the consequences. . . . History shows that God’s patience with sin does have its limits. Sooner or later society has to pay a terrible price for too long a history of injustice, selfishness and greed. But as Hosea tried to show us, even the painful consequences of judgment are really expressions of God’s tough love trying to get us humans back on the right path.”

Not only is he correct, he is from a part of the world where these words carry more weight.

How valuable is MWC to you and me?

Fifteen years ago I would have said it might hold us back.

Now, I would say we desperately need the association if God is going to get through to us.

The Anabaptist movement was an attempt, almost 500 years ago, to radically return to biblical values. It has seen coldness creep in and almost take over as the North dominated the discussion. But now, the Anabaptists are back – in the Mennonite World Conference. Get ready for a new radical commitment to biblical values, led by our sisters and brothers from the other hemisphere. 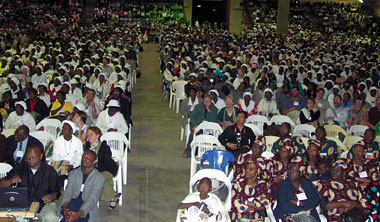 David Wiebe is Executive Director of the Canadian MB Conference. Along with current and past Conference moderators Jascha Boge and Ike Bergen, he represents Canadian Mennonite Brethren on the General Council of the MWC.