What's New
A matter of love: Reframing abortion
“Any chance you might be expecting a goldfish?”
Abortion, the image of God, and faithful witness...
Choosing motherhood: The sacrifice of honouring life
MWC Assembly small but full of joy
Bad back doesn’t hold back MDS volunteer
Transition in CCMBC National Faith and Life Leadership
Leading through the trauma of covid: Part three...
The church distracted: When the main thing is...
Remote wilderness rescue turns into service with MDS...
Home MB Herald Welcoming the stranger 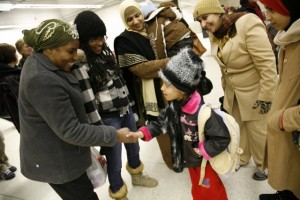 Adjusting to a new language and culture isn’t easy. Suad Saidam, her husband Mamdoh, and their children Tabarak, 12, Ali, 11, Assal, 10, Yuseef, 6, have only been in Canada for a few months through Mennonite Central Committee’s Private Sponsorship program, but they’re working hard to make a life for themselves here. The children began attending school the first week they arrived, and the parents spend every morning in English class.

In the 1970s, MCC Canada signed an agreement with the government to form the Private Sponsorship of Refugees program after images of the humanitarian crisis in Southeast Asia prompted an outcry. Canada is still the only country in the world that allows private sponsorship. To date, more than 50,000 refugees have come to Canada through MCC, sponsored by churches, individuals, and even small businesses. Each refugee has a story to tell.

Both Suad and Mamdoh were born and raised in Iraq, but because their grandparents came to Iraq from Palestine, their entire family was ineligible for citizenship. When violence erupted between Sunni and Shi’a Muslims, the family fled Baghdad, ending up on the Iraq/Syria border, where they lived for five years in El Hol “the nightmare” refugee camp. With neither Iraq nor Syria willing to claim them, Palestinian Iraqi refugees are stranded on an isolated stretch of desert. Suad and Mamdoh are quick to express their gratefulness and joy at their new lives in Canada, frequently punctuating their narratives with el-Hamdullah – “praise be to God.”

Despite loneliness and concern for family still abroad, Mamdoh’s greatest joy in Canada is how bright the future looks for his children. Suad finds joy in the people who have helped them: “At every step we have been taken care of and supported.” Sponsored by Wanner Mennonite Church, in Cambridge, Ont., the Saidams appreciate that “the Mennonites are very respectful of us and our culture.”

Christina Edmiston, a member of Wanner’s sponsorship committee, says the sponsorship program is a two-way street. “They have taught us a lot about our priorities with regard to time, family, etc.”

Johanna Dyck would agree that MCC’s Private Sponsorship program not only helps people in need of protection, but those who sponsor. In 1920, she came to Canada from Russia as a five-year-old. MCC was founded at that time as a response to Mennonites in Russia and Ukraine, like Johanna, who were suffering from persecution and famine. Seventy years later, she helped her church, Kitchener (Ont.) MB Church, sponsor the Avalos family (Marina and Antonio, children Ricardo, Ana, Willmer, and one on the way) from El Salvador in 1990.

The work of God

As the family and their sponsors got acquainted, they discovered that while the family lived in a refugee camp in El Salvador for most of the 1980s, Antonio Avalos had become friends with MCC workers. They suggested Avalos find a Mennonite church to attend in Canada. Of all the sponsors and new arrivals in this group, the Avalos family had been matched with the only Mennonite church involved. “Surely this was the work of God,” says Dyck. Over the past 20 years, the Avalos family has remained closely connected with Kitchener MB, and continues to express their deep appreciation to MCC and the church.

Lo Chiang Cheng’s family came to Canada in 1979, when she was seven years old, refugees of the Khmer Rouge. As with most sponsorships, it was only the immediate nuclear family that came. But soon after, Lo’s father Tak Chhing’s uncle and his family followed, reuniting cousins that had grown up together as siblings.

“My parents viewed this as a second chance, and drilled it into us to work hard, so we would never have to start from scratch again,” says Lo, who earned an MBA from Queen’s University and works in management with the federal government. Both parents led by example, with Tak Chhing eventually opening his own construction company.

At the other end of the country, Jennifer Mpungu, coordinator of the refugee assistance program for MCC BC, engaged Culloden MB Church in Vancouver to sponsor a refugee family from Kenya last fall. The church has “embraced this new adventure” of welcoming a Muslim family, says pastor Ted Klassen. The church is coming up on one year of financially supporting the family and has committed to a second. “It’s been rewarding,” says Klassen; “practicing what Jesus taught, loving people who don’t agree with you.”